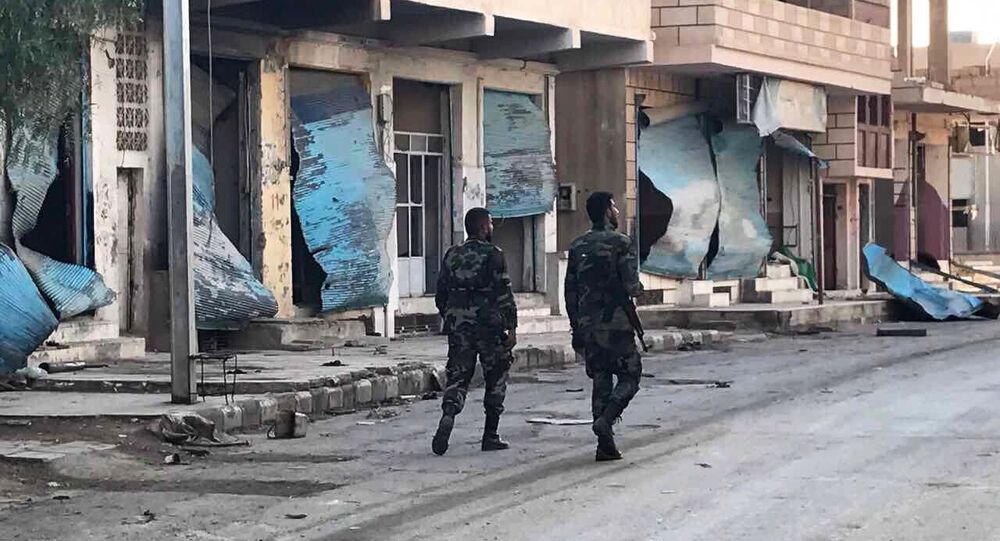 EU Introduces Sanctions Against Syrian Officials Over Alleged Chemical Use

The Council of the EU was adding high-ranking military officials over the alleged use of chemical weapons against civilians.

© Sputnik / Natalia Seliverstova
Russia Regrets EU Decision to Extend Sanctions, Response Stays in Place - Foreign Ministry
MOSCOW (Sputnik) – The Council of the European Union said Monday it was adding four high-ranking military officials to the list of those targeted by the bloc’s measures against the Syrian government over the alleged use of chemical weapons against civilians.

According to the statement, 239 people and 67 entities have been targeted by EU sanctions so far, with their assets frozen. Apart from this, there is a number of sanctions against Syria in place, in particular, investments restrictions, an oil embargo, restrictions on some equipment and technology, which are set to be in place until June 1.

© Sputnik / Nour Molhem
Russia 'Fully Shares Deep Concern' Over Alleged Use of Chemical Weapons in Mosul
So far, there has been a number of reports on use of chemical weapons in Syria, putting responsibility for attacks both on Syrian authorities and Daesh (banned in Russia) terrorist group.

In October 2016, the UN Joint Investigative Mechanism (JIM) on the chemical weapons use in Syria said that the Syrian authorities used chemical weapons at least three times throughout 2014-2015, while an earlier report said the Daesh was also responsible for several attacks. Despite lack of conclusive evidence, a number of countries, in particular the United Kingdom, France, and the United States, blamed the Syrian government for the chemical attacks. Syrian President Bashar Assad though denied all accusations, claiming the reports failed to provide conclusive evidence of its culpability and putting blame on the terrorist groups.

In late October-early November 2016, a number of chemical attacks were conducted in Syria's city of Aleppo by militants, killing dozens of Syrian servicemen and civilians. The Syrian government urged the Organization for the Prohibition of Chemical Weapons (OPCW) to conduct the investigation.

In mid-February, the Human Rights Watch group said in the report that the Syrian government forces conducted coordinated chemical attacks in opposition-controlled parts of Aleppo during the final month of the battle for the city, adding that between November 17, 2016 and December 13 there were at least eight chemical attacks. The data was obtained from in-person interviews with witnesses and comprised video footage and photograph, meaning the received data could not have been considered absolutely credible.