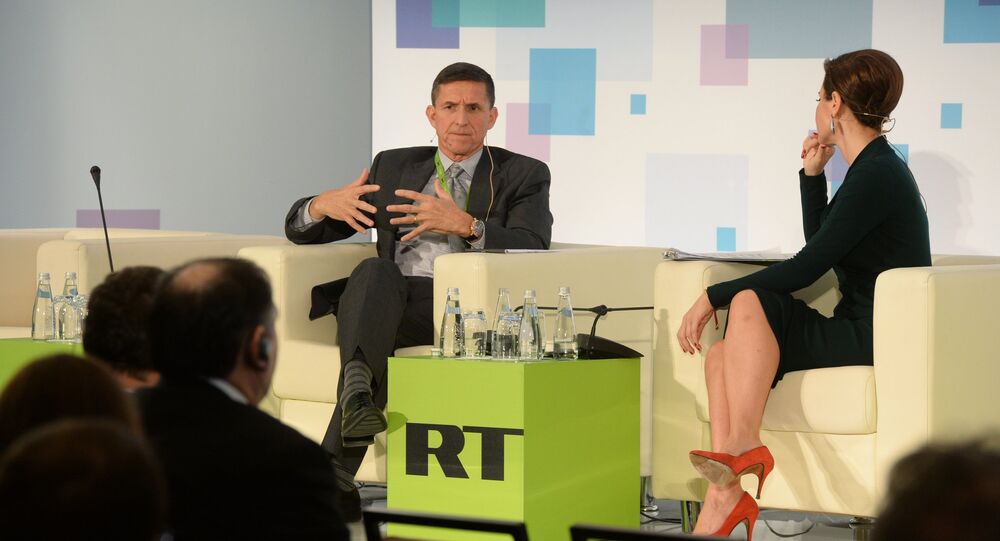 The RT broadcaster will investigate the situation over a leaked paycheck that former US national security adviser Michael Flynn had received for his appearance at a conference in Moscow, which is a "standard" and "entirely transparent" practice, RT head of communications Anna Belkina said Friday.

MOSCOW (Sputnik) — On Thursday, US newspaper The Hill wrote that Flynn received over $56,000 in payments from two the RT broadcaster and Russian companies Volga-Dnepr Airlines and Kaspersky Lab. In particular, Flynn allegedly received over $45,000 for participation in a gala in December 2015 hosted by RT. US media also published leaked emails and document with RT employees' names and private data, violating their privacy.

"Obviously it is a bit disconcerting, because from an RT perspective, there was an expectation of privacy, expectation of confidentiality involved in these kind of exchanges and negotiations. The label ‘confidential’ is still actually preserved on those emails that are there and yet they are public, there are names of our employees that are published… So, of course we will be looking into this situation in greater detail," Belkina was quoted as saying by RT.

Belkina stressed that Flynn's paid appearance at the gala had never been made a secret, adding that such events were a standard practice.

On February 13, Flynn announced his resignation after media reported, based on leaked information, that he had misled US President Donald Trump administration officials about the extent of his talks with Russian officials. The ex-security adviser did not concede any wrongdoing in his resignation letter, saying that he inadvertently briefed Vice President Mike Pence and others with incomplete information regarding the communications.

Kremlin Thanks US Senator Who Supports Probe Into RT for Popularization