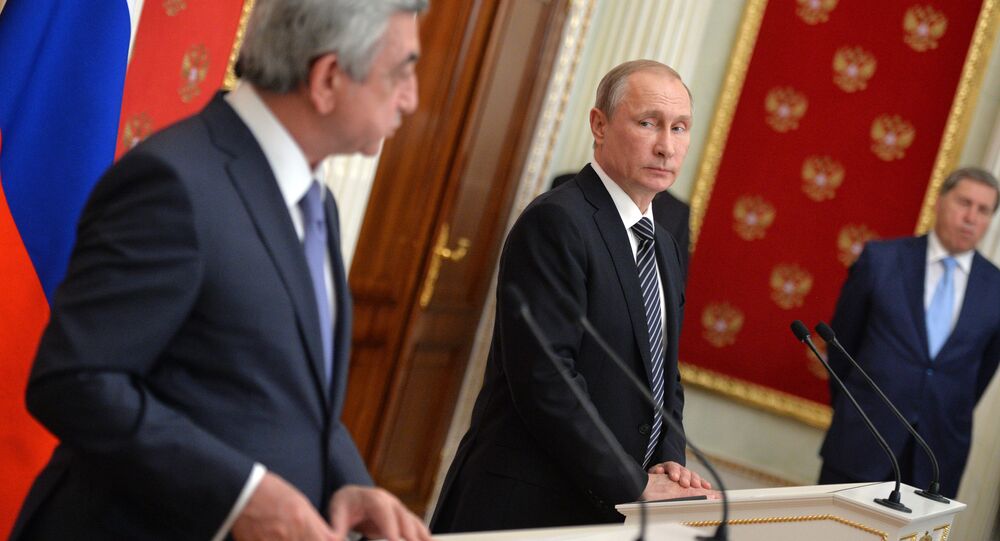 Russian President Vladimir Putin and his Armenian counterpart Serzh Sargsyan will meet in Moscow on Wednesday to discuss bilateral cooperation.

© AP Photo / Dmitri Lovetsky
Armenian President Calls Russia Yerevan's Top Economic Partner
MOSCOW (Sputnik) – On Tuesday, Sargsyan arrived in Russia. The Kremlin said the visit will take place after an invitation by the Russian side. The Armenian president will meet Russian President Vladimir Putin on Wednesday to discuss bilateral cooperation in political, trade, economic cultural and humanitarian areas, as well as prospects of further integration in the Eurasian bloc.

"The two presidents will meet on March 15 to discuss key aspects of bilateral cooperation in political, trade and economic, cultural and humanitarian areas and examine the prospects for developing integration cooperation in the Eurasian region," the press service of the Russian president said.

Investments, energy and other economic issues will also be touched upon during Sargsyan's meeting with Russian Prime Minister Dmitry Medvedev on Tuesday.

Russia and Armenia maintain an intensive bilateral dialogue on many levels and enjoy strong diplomatic ties.

Armenia's Cooperation With NATO 'Not Against Strategic Alliance With Russia'

Union With Russia One of Vital Elements for Armenia's Security - President

Armenia to Allow Entry to Russians Travelers Without International Passports