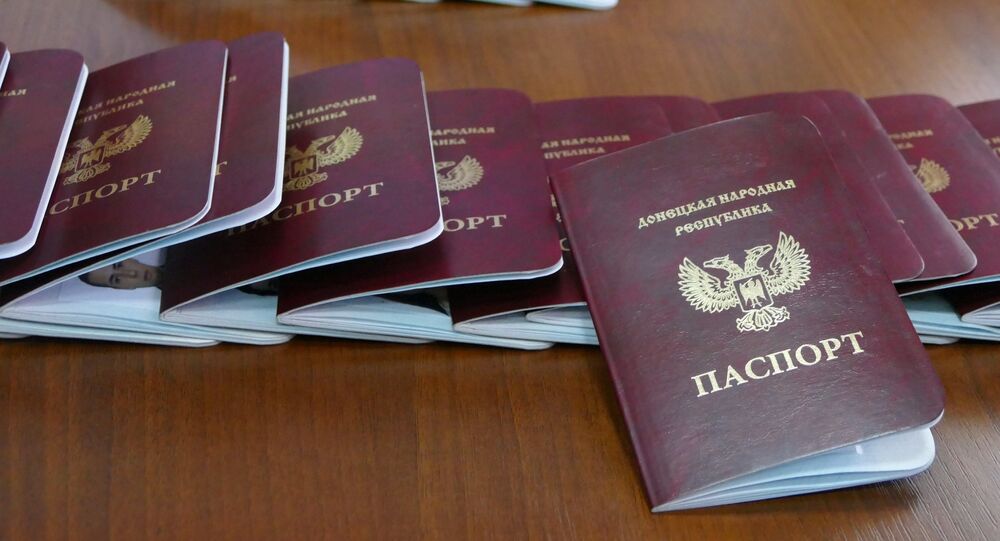 Russian President Vladimir Putin's decree to recognize identification documents issued by the self-proclaimed Donetsk and Lugansk People's Republics in eastern Ukraine came as the Normandy Four talks on Ukraine brought no tangible results; the decree was slammed by Kiev and applauded by Donbass residents.

© Sputnik / Alexei Druzhinin
Is Putin's Decision on Donbass Residents' Passports a 'Message to the West'?
On Saturday, the Kremlin's press office released a statement saying that Russian President Vladimir Putin had signed a decree which meant that Russia would begin to recognize IDs, birth certificates and vehicle registration plates, along with other documents issued by the authorities of the self-proclaimed Donetsk (DPR) and Lugansk People's Republics in eastern Ukraine to permanent residents on Russian territory.

Vladislav Deinego, representative of the Lugansk People's Republic (LPR) at the negotiations in Minsk praised Putin's decree which he said indicates Russia's care and attention to the residents of eastern Ukraine's Donbass region.

"The Russian Federation represented by its President Vladimir Putin who signed this decree is showing the whole world that Russia is taking care of LPR and DPR residents," Deinego was quoted by the Lugansk information center as saying.

He explained that Kiev does not recognize birth certificates issued in the LDR, and that from Kiev's point of view these people simply do not exist.

"But now, these people are officially recognized by the Russian Federation," Deinego pointed out.

The DPR People's Council Chairman Denis Pushilin, for his part, touted Putin's decree as a "long-awaited event" for DPR residents which he said will help resolve painful issues related to their living in Russia and which will enable their children to officially enter Russian universities. `

Since the crisis erupted in Ukraine in 2014, over a million Donbass residents have applied for refugee status and temporary shelter in Russia.

© Sputnik / Alexei Druzhinin
Lavrov Explains What's Behind Putin's Decision on Donbass Residents' Passports
According to figures from Russia's Federal Migration Service, from the one million people who fled to Russia about 600,000 have decided to make the arrangement permanent.

Pushilin was echoed by the DPR's acting Foreign Minister Natalya Nkonorova who said that the decree helped DPR citizens "once again feel the support of the fraternal people."

"We are grateful to the Russian Federation and Vladimir Putin for the fact that, despite all the pressure, Russia continues to protect people's rights and freedoms, remaining a stronghold of the principles and norms of international humanitarian law," she said.

She noted that "Ukraine is in no hurry to implement the Minsk peace agreements, using every opportunity to harass and destroy the population of Donbass."

Ukrainian President Petro Poroshenko was quick to slam the decree as a "violation of international law" and "another proof of Russian occupation" as far as Donbass is concerned. He said that he notified US Vice President Mike Pence of the decree.

© Sputnik / Mikhail Parhomenko
A woman by a house damaged by the shelling of the Ukrainian army in Makeevka, Donetsk Region. File photo

Ukraine's National Security and Defense Council Secretary Alexander Turchinov in turn claimed that the decree allegedly runs counter to the Minsk peace agreements and is tantamount to Russia withdrawing from these accords.

"This is a temporary measure aimed to restore those rights lost by Donbass residents after Kiev stopped issuing and prolonging the documents [for them]," Dzhabarov said.

"As a result, they cannot even come to Russia, while all other Ukrainians can freely cross the Russian-Ukrainian border. So we just gave them the same rights as Ukraine's other citizens currently have," he said.

Despite the fact that the decree is in no way a recognition of the DPR and the LPR, experts have not ruled out this happening in the future if Kiev continues its socio-economic blockade of Donbass and the shelling of LPR and DPR areas.

In an interview with Sputnik, Alexey Chesnakov, head of the Moscow-based Center for Political Environment think tank, said that "Russia has no choice but to expand the opportunity for the realization of basic human rights of DPR and LPR citizens now that Ukraine refuses to implement the Minsk agreements, is organizing a social and economic blockade of Donbass and shelling the territory of the republics."

"If Ukraine continues its policy of genocide against DPR and LPR residents, Russia will continue to support them right down to recognizing these two self-proclaimed republics," he said.

Chesnakov added that Putin's decree gives a signal to Ukrainian politicians that "Russia is not prepared to tolerate their games and manipulation for a long time."

© AP Photo / Evgeniy Maloletka
Putin Explains Three Reasons Behind Ukraine Crisis Aggravation
Also on Saturday, the Foreign Ministers of Russia, Germany, France and Ukraine sat down for talks in the Normandy Four format to discuss the current crisis in Donbass and the implementation of the Minsk agreements.

Speaking to reporters later that day, Foreign Minister Sergei Lavrov said that no tangible results were achieved during the talks, while his German counterpart Sigmar Gabriel praised the atmosphere of the meeting, saying that the problem should be resolved on the spot.

In April 2014, Kiev launched a special military operation against the LPR and the DPR after they refused to recognize the new Ukrainian authorities which came to power as a result of a coup. According to the latest UN figures, more than 10,000 people have already fallen victim to the Ukraine conflict.