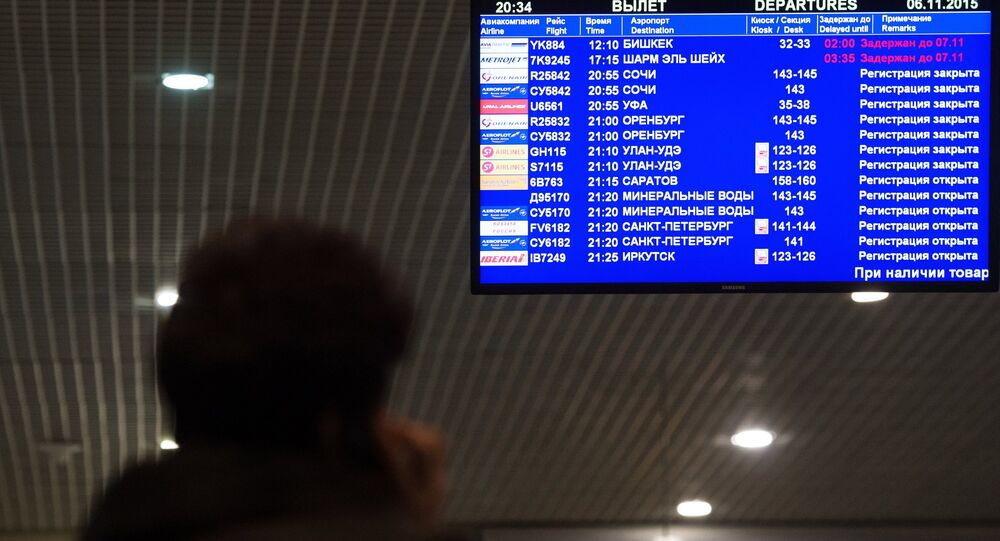 Flights Between Russia, Egypt May Be Resumed in February

Air traffic between Russia and Egypt is likely to be resumed in late February.

"Flights between Russia and Egypt will be resumed in February. The designated date is February 23. However, this will happen only in case the Egyptian side complies with all the security requirements," a source from the Russian foreign policy circles told the news outlet.

The source added that the resumption would concern charter and regular flights between Russia and three Egyptian cities, namely, Cairo, Hurghada and Sharm El-Sheikh.

© REUTERS / Amr Abdallah Dalsh
Egypt Considers Signing Currency Swap Deal With Russia – Reports
The Russian Transport Ministry did not confirm the information related to the exact date of the flights’ resumption, noting that it was up to the government to take the decision, the newspaper noted.

On Saturday, Russian Deputy Prime Minister Arkady Dvorkovich said the decision on resuming flights between Russia and Cairo was almost made, while other destinations were to be considered further.

On Monday, Egyptian media reported that the Cairo airport had completed installation of biometric equipment. Later in the day, a source in the airport confirmed to Sputnik that the airport expected, within the next 48 hours, a high-ranking delegation of Russian experts in the sphere of aviation security to pay a visit to make the final inspection of the terminal.

Russia suspended flights to and from Egypt after a St. Petersburg-bound Airbus A321 crashed in the Sinai Peninsula soon after taking off from Sharm El-Sheikh on October 31, 2015, killing all 224 people aboard.