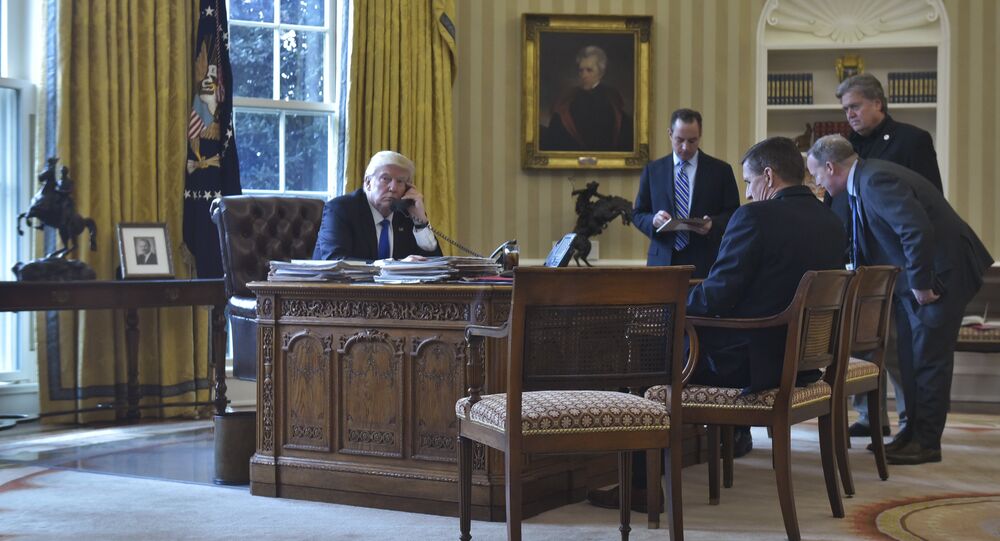 © Sputnik
Results of Putin, Trump Phone Talks Positive Signal for Business - RDIF
In an interview with RIA Novosti, Dmitry Badovsky of the Moscow-based Institute of Socio-Economic and Political Studies Foundation lauded Saturday's phone conversation between Russian President Vladimir Putin and US President Donald Trump as something that will help resolve the current strain in ties between Moscow and Washington.

On January 28, Donald Trump called Vladimir Putin for the first time since his inauguration in Washington, DC on January 20.

During the phone conversation, the two Presidents discussed improving cooperation between their countries in the fight against terrorism and the importance of rebuilding bilateral trade and economic ties.

"It is obvious that a new tone has been set in bilateral relations. Even in the characteristically vague and general wording of the press releases on the results of the conversation, one can see a real desire to move bilateral ties away from the sad state  they were in under the Obama Administration," Dmitry Badovsky said.

He was echoed by Konstantin Kosachev, head of the Russian Upper House's International Affairs Committee, who remained upbeat about the results of the Saturday phone conversation between Putin and Trump.

"Yesterday's conversation was supposed to return content and meaning to the Russian-American dialogue, something that really happened," Kosachev was quoted by RIA Novosti as saying.

He specifically drew attention to the fact that the two leaders touched upon "practically all" of the topics of mutual interest during the conversation.

"I would like to hope for mutual interest, not only the Russian side's, in shifting to a new type of relationship," Kosachev said.

© REUTERS / Francois Lenoir
Trump's Stance on Russia Means 'NATO Should Change Its Attitude'
For his part, the head of the Russian Lower House's Foreign Affairs Committee Leonid Slutsky suggested that Moscow and Washington must push for a joint fight against international terrorism, which can lead to the creation of a broad anti-terrorist coalition in Syria.

Vladimir Dzhabarov, first deputy head of the Russian Upper House's International Affairs Committee, said in turn that Trump will most likely build a partnership with Moscow.

Trump will continue to show such an approach to resolving international problems in the future because he is a pragmatic person and providing US interests is a priority for him, according to Dzhabarov.

Moscow sees Washington as its most important partner in fighting international terrorism, Putin told Trump, according to the Kremlin's official statements on the conversation.

Both leaders reportedly supported the idea of improving "real coordination" between their nations in the fight against Daesh and other terrorist groups active in Syria.

Trump and Putin also expressed their willingness to work together to "develop and stabilize" US-Russia interaction and assured each other that their nations' citizens view the other's positively.

In addition, the two world leaders discussed Iran's nuclear program, the Arab-Israeli conflict, the situation on the Korean Peninsula, the conflicts in Syria and Ukraine, as well as nonproliferation issues, the Kremlin reported.

The White House, for its part, stated that a phone conversation between Russian President Vladimir Putin and his US counterpart Donald Trump was a "significant start" to improving relations between the two countries.

© Flickr / Day Donaldson
Trump-Putin Alliance 'Spells Doom' for Daesh and Sykes-Picot
"The positive call was a significant start to improving the relationship between the United States and Russia, which is in need of repair," the statement said on Saturday.

"Both President Trump and President Putin are hopeful that after today's call the two sides can move quickly to tackle terrorism and other important issues of mutual concern," the statement added.

'Getting the Most': Trump to Speak With Putin, Hollande, Merkel on Saturday