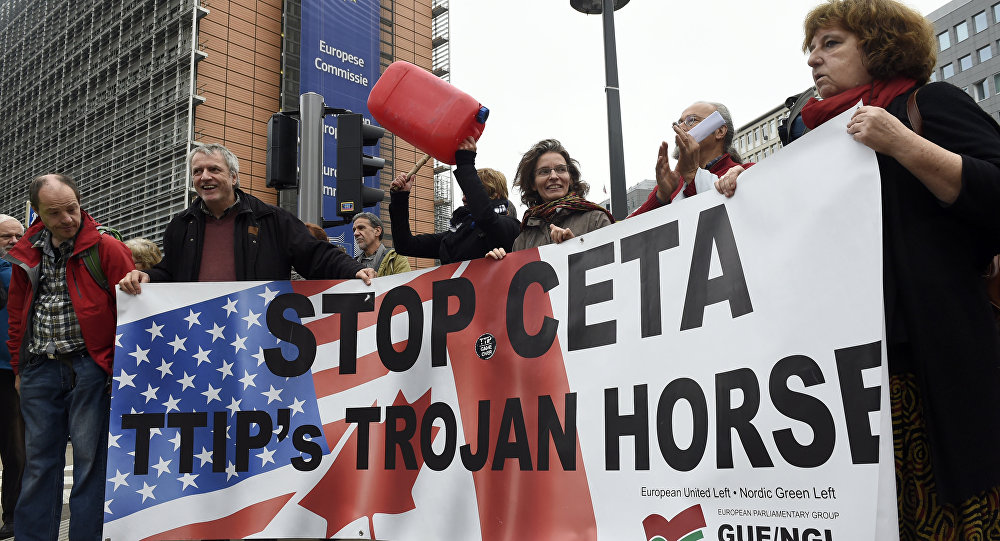 The United States under the new administration may discard the Transatlantic Trade and Investment Partnership (TTIP) just like it did with the Trans-Pacific Partnership (TPP), to pave the way for new trade policy, focused on local economies and sustainable jobs, experts told Sputnik.

The US withdrawal from the TTP was not a surprise because Trump had made it part of his campaign platform, according to Allan Zeman, a Hong Kong business magnate and the chairman of Lan Kwai Fong Group.

"I believe TTIP will follow suit as this President believes in America first and is trying to get away from the old globalization model," Zeman told Sputnik.

Zeman added that he saw globalization as beneficial and was skeptical about rejecting it.

© Sputnik /
US-EU TTIP Free Trade Deal Still Possible With Trump as President - Berlin
Most free trade agreements, discussed globally face uphill battle on the way to ratification, with the argument against them revolving around proper protection of local businesses and environmental impact. The TTIP, in particular, has been criticized for its favoring large transnational companies, secretiveness surrounding the negotiations, potential lowering of various product quality standards.

The STOP TTIP campaign waged by over 500 European organizations warns that corporations would be able to intervene in drafting legislation, workers’ rights could suffer and general inequality would be only aggravated by the advent of the free trade.

On October 30, 2016, the European Union and Canada signed the Comprehensive Economic and Trade Agreement (CETA), which, if enforced, would eliminate next to 100 percent of existing tariffs between the two sides. The signing, however, almost did not happen as Belgian French-speaking region of Wallonia protested against the agreement due to the lack of protection for the agricultural sector. The deal faced opposition from other European countries and from within Canada as well.

Freedom Party of Austria (FPO) member and former presidential candidate Norbert Hofer told Sputnik that the good economic relationship between the European Union and the United States did not have to be based on a free trade deal.

"I hope that the TTIP will not be realized, because I believe that this agreement will not benefit business in neither the US nor Europe," Hofer said.

On Friday, Trump is set to meet UK Prime Minister Theresa May, with whom he is expected to discuss trade, as both the United States and the United Kingdom seem to be leaning toward bilateral deals. 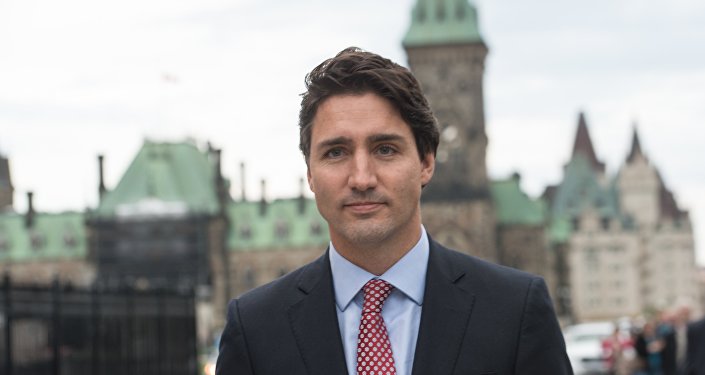 Sam Cossar Gilbert, Friends of the Earth International Trade campaigner, told Sputnik that both TPP and TTIP had little viability and the governments had to resuscitate the global trade system.

"We need to build a new trade policy that is designed to support local economies, sustainable jobs, environment protection and human rights, not hinder them," Gilbert said.

According to Gilbert, the Trade in Services Agreement (TiSA), still under negotiation, and other similar deals were potentially harmful to citizens’ rights and the environment.

TiSA negotiations involve 23 parties from around the world who want to facilitate the exchange of services, such as banking, law, e-commerce and others. TiSA, while it has drawn less attention than TTIP is larger in the number of members, if not in scope, with Canada, Australia, Japan, South Korea and a few other countries joining the United States and European Union. WikiLeaks has released several documents in an attempt to pierce the veil of secrecy surrounding the talks on this deal, with the latest batch made public in October 23.

"It would be hypocritical for decision-makers to oppose one of these deals and not the others," Gilbert said. 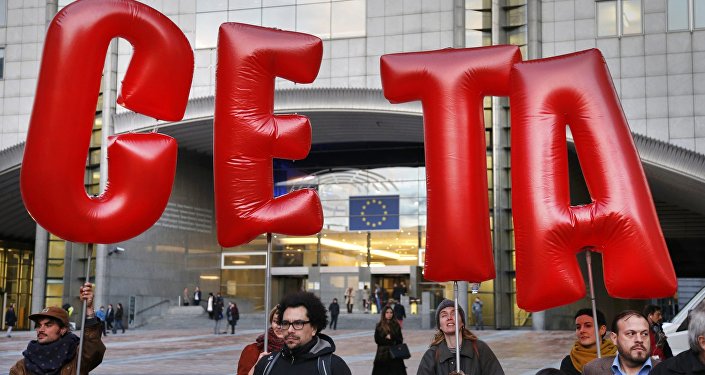 © REUTERS / Francois Lenoir
Canada Expects UK to Join CETA Trade Deal
The director of the German NGO Forum on Environment and Development, Jürgen Maier, agreed that Trump administration would concentrate on US interests and TTIP negotiations would not continue.

"No matter whether Trump signs such an order [on canceling TTIP] or not, we cannot expect the TTIP negotiations to continue because he clearly will make no compromises that the European Union demands from the US," Maier told Sputnik.

Trump said that he would renegotiate the North American Free Trade Agreement (NAFTA) with the two other members of the deal, Canada and Mexico, thus proving that the new US administration would adopt a tough stance on all free trade agreements and not just Transatlantic ones.

The America First Trade Policy, as outlined by the Office of the United States Trade Representative, "is committed to ensuring that American workers are given a fair shot at competing across the globe." The new policy wants to attract companies to the United States and help create more jobs.

As Zeman said, it is too early to say how this policy will play out and what results it will achieve. It is clear, however, that the pushback against the free trade is taking on the global proportions with the United States adopting a new route.