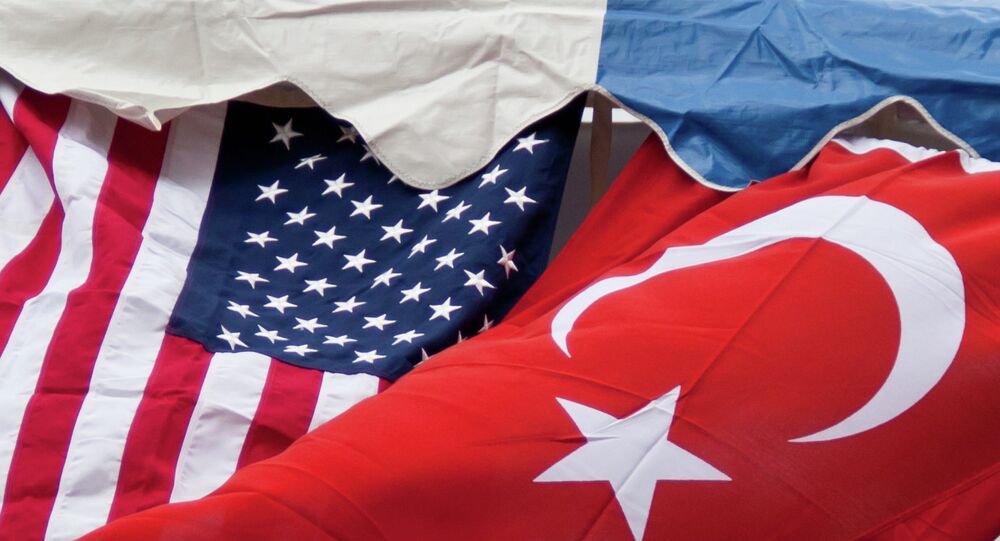 'Ups and Downs': What the Obama Presidency Did to US-Turkey Relations

© REUTERS / Murat Cetinmuhurdar/Presidential Palace
Why Turkey's Erdogan 'Had Every Reason' to Use Stern Language Toward US
In the run-up to today's inauguration of President-elect Donald Trump in Washington, Turkish experts gave their thoughts on how the relations between Washington and Ankara developed under outgoing President Barack Obama.

In an interview with Sputnik Turkey, Middle East expert Alper Birdal said that during Obama's 8-year tenure, the relations between the two countries repeatedly went through ups and downs.

"I believe that the United States itself is a major cause of alternating ups and downs in Turkish-American relations. When Obama entered office, he pledged to resolve the crisis, which affected the ideological, cultural, and economic spheres. But due to some historical reasons, it was clear that this effort was doomed to fail," Birdal said.

"Obama coming to power was a kind of attempt to restore the American system, not least with the help of using the model of 'moderate Islam' toward Turkey. Due to efforts by Turkey's ruling Justice and Development Party, this attempt is never mentioned nowadays," according to him.

© AFP 2021 / JIM WATSON
US President Barack Obama (R) greets Turkish President Recep Tayyip Erdogan prior to a meeting at the US Chief of Mission’s residence in Paris on December 1, 2015

"This model stipulated creating a new center of American hegemony in the Middle East, which is why at first US-Turkish ties were warm and friendly," Birdal said.

"We witnessed the Turkish dream of restoring the former Ottoman Empire being supported by Washington. Also, we saw America using the process of Arab Spring and developing the idea of a new union, of which Turkey was a key member. This idea also envisaged bringing the Turkey-supported Muslim Brotherhood to power in several countries in the region," he added.

However, he went on to say, this plan which did not take any of the Middle East's social or economic realities into account, collapsed rather quickly when faced with obstacles.

"In particular, the problems were related to the situation in Syria. After that, the relations between Turkey and the United States saw their first signs of contradictions, which gradually deepened and finally led to a serious deterioration in bilateral ties," Birdal pointed out.

He was echoed by former Turkish Ambassador to NATO Onur Oymen, who told Sputnik that Turkish-American relations have been unstable for a long time.

"Summing up, we cannot say, [for example] that Turkey received any adequate support from the US when it came to the fight against terrorism," Oymen said referring to Obama's visit to Turkey eight years ago, something that indicated a difference between the models used to combat terrorism in the two countries.

Touching upon the Syria issue, Oymen said that "at first it seemed that Washington's key priority in Syria was to overthrow Assad, and that Turkey supported this political strategy."

"But then it became clear that the US is pursuing its other interests in Syria and that the overthrow of Assad gradually ceased to be the number one goal for Washington. Also, significant differences in the positions of Ankara and Washington came to the fore at the time. Turkey gradually began to act more independently," Oymen said.

© Flickr / U.S. Department of Defense
What the US Can Do if Turkey Kicks It Out of Incirlik Airbase
According to him, it takes time to figure out how Turkish-American relations will develop under President Donald Trump.

"Now it is quite difficult to say for sure what will happen under Trump in terms of developing ties between Washington and Ankara. It remains to be seen. It is only clear only that under Obama, Turkey did not receive the necessary support from the US in the fight against terrorism and in other important areas," he concluded, specifically citing the White House's reluctance to support Turkey's negotiation process related to Ankara's bid for the EU.

US Urges Turkey Amid ‘Aggressive Efforts’ of Extremist Groups - Embassy