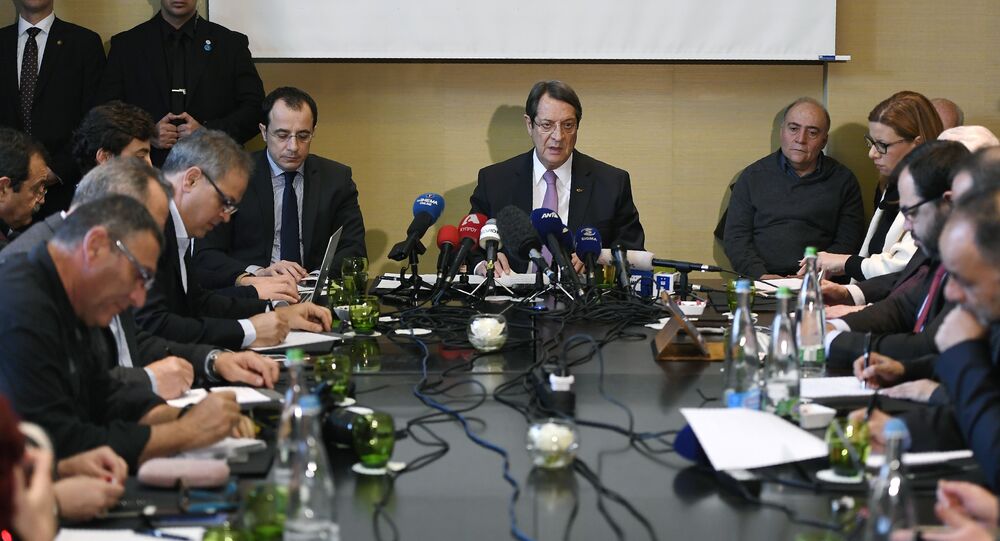 President of Cyprus Nicos Anastasiades stated that there are some signs of progress in the Geneva talks on Cyprus reunification with the participation of the leaders of the island's Greek and Turkish communities.

© AFP 2020 / Adem Altan
Erdogan: Turkish Troops in Cyprus for Good
MOSCOW (Sputnik) — The Geneva talks on Cyprus reunification with the participation of the leaders of the island's Greek and Turkish communities has brought some progress, President of Cyprus Nicos Anastasiades said Friday.

"For the first time, Turkey is actively participating in the discussion on security issues and guarantees. We are actually at the very beginning of the dialogue. It is recognized now that the security of one side cannot pose a threat to the other… Since there are signs that the dialogue continues, I hope for the Geneva conference decisions. We have chosen the path that leads to hope. If we reach an admissible agreement, the conference will result in some decision," Anastasiades said at a press conference.

© REUTERS / Yiannis Kourtoglou
'No Breakthrough in Too Hasty Cyprus Talks' - Think Tank Academic
The Cyprus reunification talks with the participation of Turkish Cypriot leader Mustafa Akinci and Anastasiades started in Geneva on Monday. On Wednesday, the two sides exchanged maps outlining the areas of control for Greek and Turkish communities.

On Thursday, the talks were joined by Cyprus’s guarantor countries — Greece, Turkey and the United Kingdom, as well as the European Union.

The talks are set to resume on January 18, when the working group will make a list of particular issues to be discussed.