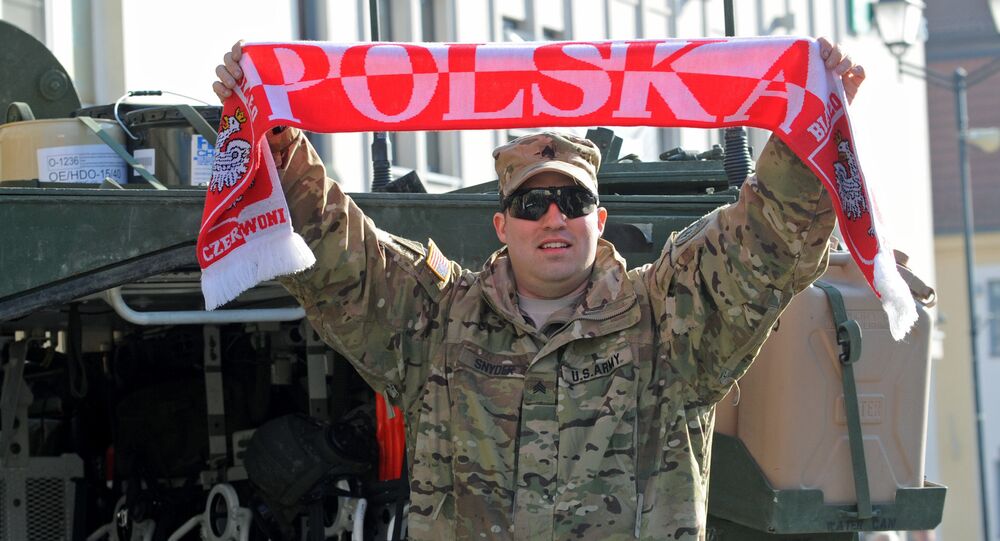 US Tanks in Europe Intended as 'PR Attack', Divert Attention From Terror Threat

The deployment of 1,000 US soldiers to Poland is nothing but a PR move, Russian security expert Dmitry Yefimov told Sputnik.

© Sputnik / Alexandr Kryazhev
'Russia Will Focus On Affordable Asymmetric Measures' if NATO Wants Arms Race
In an interview with Sputnik, Russian security expert Dmitry Yefimov described the deployment of 1,000 US soldiers to Poland as little more than a PR move.

Earlier this week, Bartlomiej Misiewicz, spokesman for the Polish Defense Ministry, said that almost 1,000 US soldiers and the first shipment of equipment for a US tank brigade had arrived in Poland on a mission to build up region's defense capabilities.

📷: First group of #US soldiers has already arrived in #Poland (via @adzgb) pic.twitter.com/qGu0LuQmNI

Commenting on the matter, Dmitry Yefimov specifically drew attention to the fact that the US military will be deployed in Europe on a rotating basis.

"The fact that this US contingent will be stationed in Europe on a rotating basis bypasses the agreements on the number of NATO troops near our borders. Although they will now conduct drills near the Russian borders in the next nine months, I think it won't damage Russia's interests," he said.

According to him, the US is trying "to gain a foothold in Europe at least at the level of tactical decisions."

"But I think that US President-elect Donald Trump and his new military advisers may well review this tactics because Trump focuses more on America's internal situation, " Yefimov said.

At the same time, he said that for Europeans, the ideological component of joint military exercises with the United States is worth much more than the military aspect.

"What we see now is an attempt to have an external enemy rather than fight with the inner foe. It seems to me that a wave of terror will increase in Europe this year, which is why Europeans will have to compensate by thinking about Russia," according to Yefimov.

"If they think of Russia, they will be less fearful of domestic terrorists. That's why they are conducting this PR attack, and it is safe to say that the ideological component of these exercises is much more important than the military one," he said.

In an interview with Sputnik Germany earlier this week, a member of Germany's Die Linke Party explained what he thinks are the real reasons behind the upcoming NATO maneuvers.

"First of all, this is about the justification of NATO's existence. Therefore, new threats are being invented and new scenarios — developed. Since the beginning of the Ukrainian crisis, Russia has been portrayed, once again, as an enemy in Germany. After its rather unsuccessful military operations abroad — in Afghanistan and Libya — NATO is searching for new meaning in order to justify its existence," Neu said.

For his part, Polish commentator and former politician Mariusz Olszewski told Sputnik that "Barack Obama is taking every effort to annoy Trump and put spokes in his wheel so that he may put Trump at a disadvantage."

© AFP 2020 / JANEK SKARZYNSKI
Russia Will Not Be Dragged Into a 'New Arms Race Imposed by US, NATO'
Addressing the deployment of US soldiers to Poland, Olszewski said that it was high time to abandon divisive policies and that Poland should focus on upgrading its military capabilities instead of relying on a foreign military presence.

NATO has been building up its presence and defense capabilities in Eastern Europe, concentrating on the three Baltic States and Poland, with each expected to receive additional battalions starting this year.

Russia has repeatedly warned that it sees the arrival of troops and military equipment on or near its borders as signs of hostility, which may destabilize the region.

NATO Building Presence Along Russia's Border as Retaliation for Own Failures