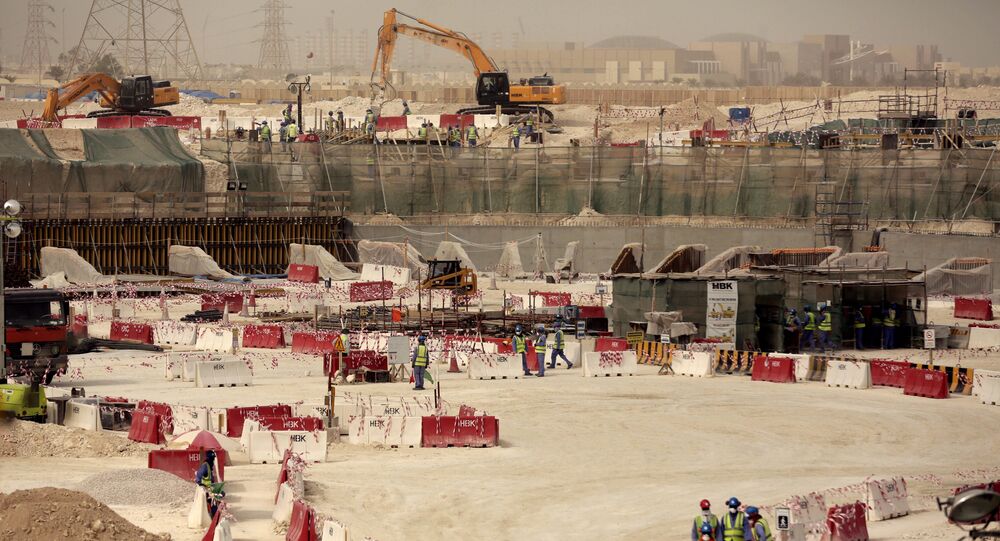 FIFA welcomes the decision of the Commercial Court of Zurich to reject a claim concerning FIFA’s alleged wrongful conduct and liability for human rights violations in connection with the 2022 FIFA World Cup in Qatar, according to official statement.

© AFP 2020 / MICHAEL BUHOLZER
FIFA Could Face Lawsuit Over Treatment of Migrant Workers in Qatar
MOSCOW (Sputnik) — An international arbitration court has rejected a case against FIFA over its alleged complicity in the maltreatment of workers at the Qatar World Cup 2022 construction sites, FIFA said Friday.

In December, the Netherlands Trade Union Confederation (FNV) confirmed it had lodged filed a legal action against football governing body FIFA. It said FIFA did not demand assurances from Qatar that it observes fundamental human and labor rights of migrant construction workers and ensures the Kafala system, which involves employers monitoring workers by controlling their visas and legal status, is abolished.

"FIFA welcomes the decision of the Commercial Court of Zurich to reject a claim lodged by the Dutch trade union FNV, the Bangladeshi Free Trade Union Congress, the Bangladesh Building and Wood Workers Federation and the Bangladeshi citizen Nadim Shariful Alam concerning FIFA’s alleged wrongful conduct and liability for human rights violations in connection with the 2022 FIFA World Cup in Qatar," FIFA said in a statement published on its website.

© REUTERS / Arnd Wiegmann
FIFA Sets One-Year Ban on Vice-President of Qatar Football Association
The legal action was aimed at forcing FIFA to exert influence on Qatar so it ensures minimum working standards for migrant workers. The lawsuit was lodged by FNV on behalf of Bangladeshi migrant worker Nadim Sharaful Alam, who asked for compensation for damages.

It its statement, FIFA said it will work with Qatar in ensuring decent working conditions for migrant workers.

"FIFA takes the issue of working conditions and human rights in connection with the 2022 FIFA World Cup in Qatar very seriously. FIFA monitors the situation very closely and, as recently stated by President Infantino, will continue to urge the Qatari authorities to ensure safe and decent working conditions for construction workers," the statement reads.

The football body went on to describe various procedures in place to address human rights concerns, including an agreement between Qatar and the Building and Wood Workers’ International (BWI) trade union to inspect worker accommodation.

The treatment of World Cup facility builders by Qatar, which relies heavily on labor from South Asia, has, however, received continued criticism from human rights group in 2016, including a damning Amnesty International report in March as well as a warning from the United Nations earlier that month.

FIFA Could Face Lawsuit Over Treatment of Migrant Workers in Qatar