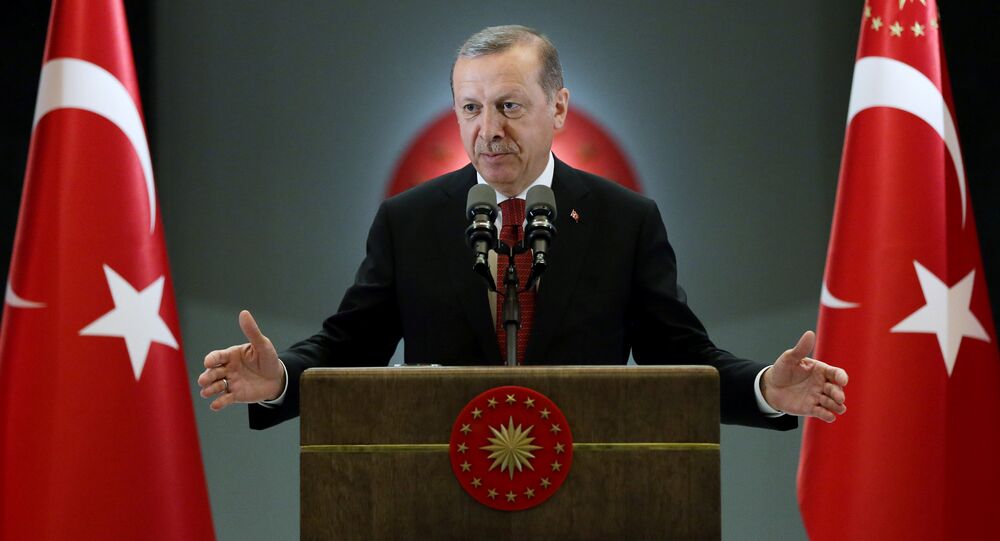 The US State Department dismissed Turkish President Erdogan's claims about Washington backing terrorists in Syria as "ludicrous"; Russian military expert Vladislav Shurygin, however, said in an interview with Sputnik that Erdogan had every reason to make such a statement.

© AFP 2021 / ALEXANDER NEMENOV
Russia Outperforming US in Building 'Strategic Military Ties' With Turkey
US State Department Spokesman Mark Toner rejected Turkish President Recep Tayyip Erdogan's claims that the White House was supporting terrorists in Syria as "ludicrous. Toner said that there was no truth to the accusation.

Earlier this week, Erdogan claimed that he had evidence that the US-led coalition troops are supporting Daesh (ISIL-ISIS) and Kurdish groups, including the People's Protection Units (YPG) and the Democratic Union Party (PYD).

"They were accusing us of supporting Daesh. Now they give support to terrorist groups, including Daesh, YPG, PYD. It is very clear. We have confirmed evidence, with pictures, photos and videos," Erdogan said without elaborating.

Also pointing the finger at the United States was Syrian President Bashar Assad. According to him, the militants who seized Palmyra arrived in the city either "with the direct support of the Americans, or, at best, with the knowledge of the Americans."

Speaking to Sputnik, military expert Vladislav Shurygin said that Erdogan had good reason to make such a strong statement.

"I think everything is obvious. From the very beginning, the United States did not accept Erdogan. In this regard, the recent coup attempt in Turkey, which I think was very closely linked to the Americans who were in the know and actually supervised the coup, infuriated Erdogan. He understood very well that he can no longer rely on Washington," Shurygin said.

© AFP 2021 / AWAD AWAD
Daesh 'Could Have Been Wiped Out in 2 Months If It Wasn't Serving US Interests'
He also said that in the past few years, Turkish territory has been used to support the militants and that Erdogan's intelligence agencies and he himself certainly knew the details of arms via Turkish soil.

"Actually, this is an open secret and many experts know that the CIA has actively supported Daesh terrorists over the past three years," he said.

According to him, the United States knows full well that it is Ankara which may nail Washington to the wall in Syria.

"In this case, it would be very easy for Erdogan to force the US to come clean on Syria. The Americans, in turn, know perfectly well that it is Erdogan who may 'sink' them, catch them red-handed and prove they are collaborating with the terrorists," Shurygin said.

Earlier this month, US President Barack Obama waived restrictions related to providing military assistance to foreign forces in Syria, according to a White House press release issued on Thursday. The assistance will include the supply of man-portable air defense systems to forces allied with the United States.

© AP Photo / Hassan Ammar
Sidelined in Syria: US Irked by 'Success of Moscow and Damascus in Aleppo'
Commenting on the decision, Shurygin said that it seems that the United States does not care about where these air defense systems will be used by the so-called moderate Syrian opposition or Daesh terrorists.

Turkey-Russia-Iran Agreement: Is US Out in the Cold in Syria?