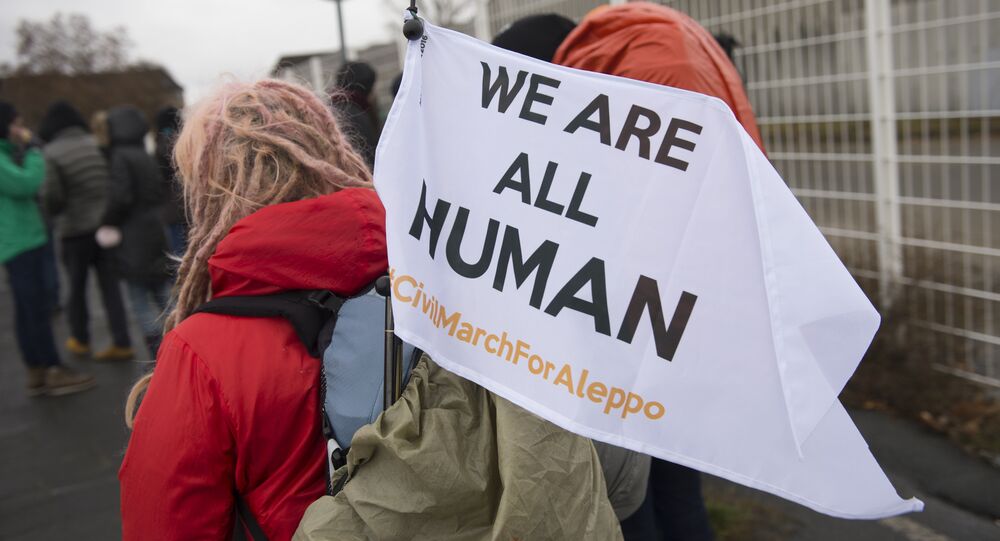 In an interview with Sputnik, Sebastian Olenyi, one of the organizers of the Civil March for Aleppo campaign, touted it as another opportunity to call on people to try their best to resolve the Syrian issue.

The demonstrators set off from a refugee camp holding white flags symbolizing peace and banners reading "We are all human."

The so-called Civil March for Aleppo has been organized in a bid to try and bring relief to citizens of Aleppo and other besieged cities in Syria and beyond.

The group is demanding international help for the civilians, the protection of human rights and also a peaceful solution to the Syrian crisis.

It is not yet clear how long the march will actually take, but the initial stage to reach the Czech border is expected to take around fifteen days. The route will continue through Eastern Europe and then on to Turkey.

© AFP 2021 / Paul Zinken / dpa
White flags are fixed on backpacks at the Tempelhofer field before the start of a solidarity march for Aleppo in Berlin, Germany, on December 26, 2016

Speaking to Sputnik, Sebastian Olenyi, one of the organizers of the event as well as a press officer for the Civil March for Aleppo campaign, specifically underscored the importance of increasing pressure on the politicians as far as a peaceful solution to the Syrian deadlock is concerned.

Asked about whether the Civil March for Aleppo would succeed in implementing its goals, Olenyi said that "any attention and any political pressure that we can increase with respect to politicians can already be seen as a success."

He said that the organizers of the march are calling for all parties involved in the Syrian conflict as well as European and other foreign politicians to intensify their efforts to develop a peaceful solution to the problem.

"We will also raise awareness on the matter concerning the people along the way, including in the Czech Republic, Austria, Slovenia, Croatia, Serbia, Macedonia, Greece and Turkey," he added.

Asked about a response to the initiative from local authorities and the public, Olenyi said that there are both supporters and opponents but that it will not stop the organizers from going ahead with the campaign.

"We are not a silver bullet [on the matter], but we are trying our best to bring a message of hope and pressure people to fight for a better solution in Syria," he pointed out.

On December 16, the Russian Defense Ministry's Center for Syrian Reconciliation said that the Syrian army operation to liberate the eastern neighborhoods of Aleppo was over, and that Syrian government troops were eliminating separate hotbeds of militant resistance.

© AFP 2021 / LOUAI BESHARA
Mass Graves in Aleppo Fuel Suspicion of So-Called 'Moderate Opposition' in Syria
The Syrian forces announced that Aleppo had been fully liberated from militants on December 22.

On December 23, Maj. Gen. Zaid Saleh, the head of Aleppo's security committee, told Sputnik that over 31,000 militants and members of their families had left the eastern districts of Aleppo under an agreement with the Syrian government.