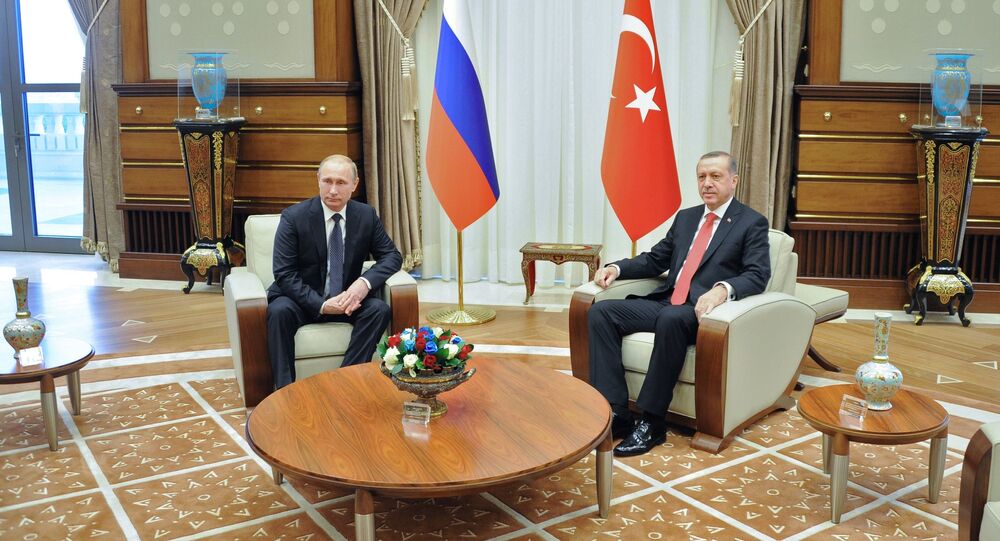 Relations between Russia and Turkey should be completely restored, Diego Pautasso from Vale dos Sinos University in Brazil, told Sputnik.

© AFP 2020 / KARAM AL-MASRI
Russia, Turkey Work on 'Constructive Atmosphere' for Syria Talks Despite Murder
In an interview with Sputnik Brazil, Diego Pautasso, a professor of political science specializing in international affairs and the BRICS countries at Vale dos Sinos University (the University of the Sinos Valley), called for a full normalization of Russian-Turkish ties.

The interview came after Russian President Vladimir Putin's annual year-end press conference, where he touched upon an array of what Pautasso described as "the most important issues."

"It seems to me that President Putin's drive to develop Russia's relations with China is vitally important for both countries, not only within BRICS group but also the entire international community. I think that Putin's statements about his desire restore normal relations between Russia and the US and European governments are also of great importance."

"As for Syria, it is necessary to emphasize that Russia supporting Syrian President Bashar Assad was a decisive factor for containing Daesh activities in this Arab country," he said.

© Sputnik / Mikhail Klimentyev
High Hopes: Russia-Turkey Political, Economic Ties to Be 'Further Strengthened'
He also underscored "the dynamics of Russian-Turkish relations, which were once interrupted by the incident with the downing of a Russian warplane by the Turkish Air Force."

"However, as the investigation into last week's assassination of Russian Ambassador Andrey Karlov goes on, relations between Russia and Turkey should be fully normalized," Pautasso said.

Andrey Karlov was gunned down by off-duty Turkish police officer Mevlut Mert Altintas during the opening of an art gallery exhibition in the Turkish capital Ankara on December 19.

Speaking at his year-end press conference in Moscow last Friday, Russian President Vladimir Putin described Karlov's assassination as an assault on Russia and its ties with Turkey.

"This was primarily an assault on Russia and Russian-Turkish relations. Frankly, I used to be skeptical about claims that our jet was shot down [in Syria last year] without an order from Turkey's top leadership but rather by people who wanted to damage Russian-Turkish ties," Putin said.

"But the attack on the ambassador by a special operations officer got me thinking: I feel now it is possible that destructive elements could have found their way into social structures, including law enforcement and the army," he added.

© Sputnik / Aleksey Nikolskyi
From Nukes and Trump to Europe's 'Voice': Highlights of Putin's Annual Year-End Press Conference
"Will this undermine the Russian-Turkish relationship? No, it won't because we realize the importance of Russian-Turkish ties and will make every effort to deepen them," Putin vowed.

Relations between Moscow and Turkey became strained after a Su-24 Russian bomber was downed by a Turkish warplane in November 2015, but tensions eased after President Erdogan apologized to President Putin in June 2016.

Erdogan: Turkey Not to Allow Anyone to Spoil Relations With Russia