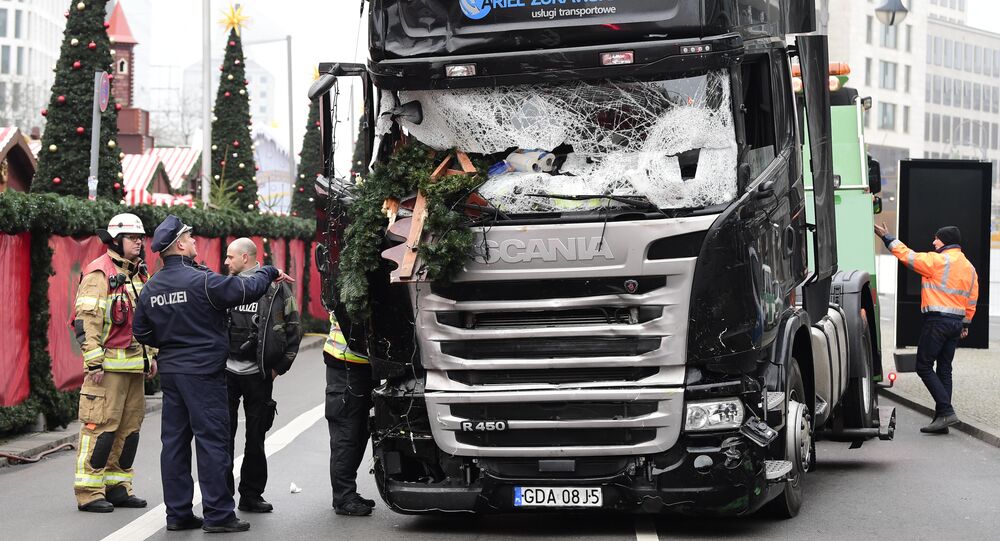 In the Death Truck: Terrorists Mull Over Mad New Methods for Murder

The tragedy in Berlin, which killed more than ten people, is associated with the events in Nice and clearly indicates that terrorists have developed a new tactics, according to German media.

It was preceded by a similar incident in the French city of Nice which occurred on July 14, 2016. The Bastille Day attack shocked the international community, according to the German tabloid newspaper Bild.

"The attacks differed from the previous ones in terms of the terrorists using no explosives, firearms or edged weapons in the process," Bild said, adding that at first glance, such attacks looked like unprofessional steps made by terrorists.

"However, the tragedy repeated; the same scenario transpired in Berlin, something that consolidated the success of the jihadists," according to the Bild.

Terrorism has changed significantly in the past several years, Bild said, citing the months of preparation and huge sums needed for conducting the 9/11 attacks.

"Nowadays, social networks help terrorists achieve the same effect without spending lots of effort and money and without the risk of being detained. In this sense, the terrorist attacks, previously seen as emergency events, turned into something that is already not uncommon in Europe, "Bild said.

It was echoed by the newspaper Frankfurter Allgemeine Zeitung, which specifically drew attention to the fact that the Berlin terrorist tried to simulate the Nice attack by plowing a large vehicle through a crowd of people.

"After the Nice attack it became obvious that special security measures are needed for holding mass events. However, the tragedy repeated itself, with the authorities failing to protect the people and now insisting that the tragedy should not disrupt Europeans' way of life," Frankfurter Allgemeine Zeitung said.

Touching upon the new terror tactics, the newspaper Handelsblatt in turn bemoaned the fact that Germany not only fails to contain terrorism, but cannot even really understand the number of criminals or their motives.

"Many people feel that they are turning into outside observers of their own lives and are no longer able to manage their own destiny. And if you did not emerge at a specific time on a specific Christmas market — you should be happy," the newspaper concluded.

In this vein, RIA Novosti pointed to the Jerusalem bulldozer attack which occurred back in July 2008.

© AFP 2021 / Justin Tallis
'Political Point Scoring': Farage Blames Merkel for Berlin Terror Truck Attack
At the time, an Arab resident of East Jerusalem attacked several cars on Jaffa Road in Jerusalem  using a front-end loader (erroneously referred to as a bulldozer in the media), killing three people and wounding at least thirty other pedestrians, before being shot to death.

After a similar attack took place shortly after, the Israeli press started to write about the new "bulldozer" form of terrorism, which was followed by the "automotive" terrorism in which attackers tried to drive their cars into crowds of pedestrians and bus stops.

The latest such attack took place in Israel in late October 2016.