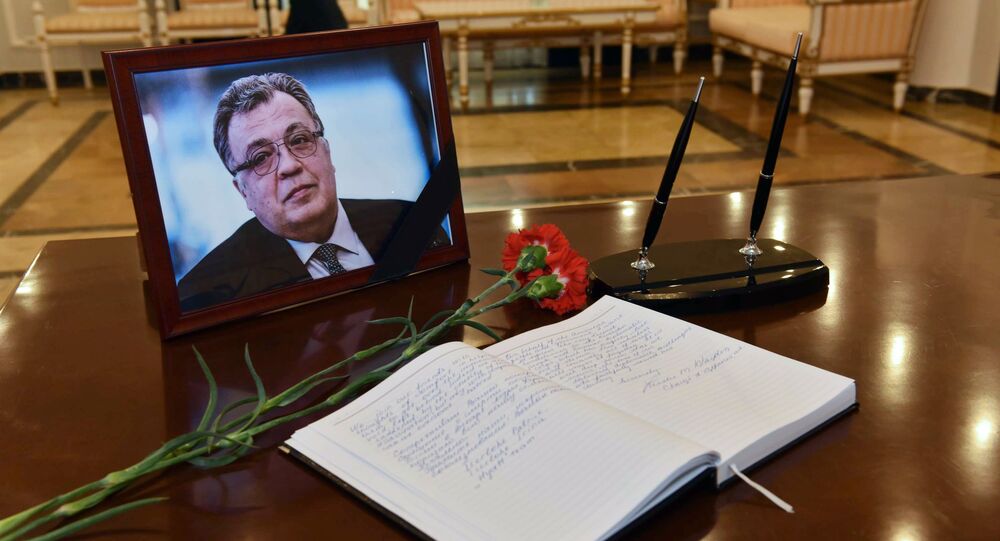 Tuesday's talks between the Foreign Ministers of Russia, Iran and Turkey were held in the immediate wake of a grizzly terrorist attack in Ankara in which Russian Ambassador to Turkey Andrey Karlov was assassinated by a gunman while visiting an art gallery in the Turkish capital.

"This tragedy makes us all take more efforts to fight terrorism and makes our meeting today even more urgent," according to him.

In a joint statement, the three top diplomats said that their countries had agreed to help resolve the Syrian conflict, while also vowing to further improve cooperation in combating terrorism.

Speaking to Sputnik Iran, Hossein Sheikholeslam, an advisor to the Iranian Foreign Minister, strongly condemned the assassination of the Russian Ambassador and called for the mobilization of all forces to eradicate terrorism and solve the Syrian crisis.

© REUTERS / Omar Sanadiki
People walk amid the rubble as they carry belongings that they collected from their houses in the government controlled area of Aleppo, Syria December 17, 2016

"I express my sincere condolences to Mr.Karlov's family and the entire diplomatic corps in Russia. His murder is a horrendous terror act which should be thoroughly investigated," he said.

He pointed the finger at "the Zionist regime and those who spread terrorism, including monarchs of a number of Arab states," who he said may be behind Karlov's killing.

"Russia and Iran did their best to help reduce the civilian death toll during the liberation of Aleppo. However, the propaganda of our enemies, opponents of Aleppo's liberation who actually fueled this crisis in the region, has finally led to the barbaric murder of a respected diplomat,” Sheikholeslam said referring to Karlov.

Sheikholeslam described the Syrian crisis, which he said was sparked by outside terrorist forces, as "a threat to all of us."

© AP Photo / Osmancan Gurdogan
Turkish police officers cordon off the area close to a photo gallery where the Russian Ambassador to Turkey, Andrei Karlov, was shot and killed by a gunman in Ankara, Turkey.

"We should give each other a helping hand, and we will welcome only constructive initiatives on the matter. The Syrian refugees should return to their homes.  And it is the Syrian people who should decide the fate of their country, not some presidents of some countries at some meetings," he said.

Touching upon the Tuesday talks between the Foreign Ministers of Russia, Iran and Turkey, he said that "the most important issue of this meeting was the mobilization of forces for the liberation of the whole of Syria [from terrorists]."

"Now that Aleppo has been liberated, there is hope and opportunity that this goal may be achieved. And if someone once made a mistake, then now is the right time to recognize mistakes and not repeat them," Sheikholeslam added.

He also said that "we will accept any [political] player, whether he is major or minor, and we will support him."

"We will fight all those who are only interested in destruction because we all need peace, security, friendship and stability as well as the prosperity of our peoples," he concluded.

© Sputnik / Iliya Pitalev
NY Daily News Joins Daesh in Celebrating Assassination of Andrey Karlov
Since 2011, Syria has been engulfed in a civil war, following protests that turned violent, as part of the so-called Arab Spring. In the last several months, Aleppo became a major battleground in Syria.

On December 16, the Russian Defense Ministry's Center for Syrian Reconciliation said that the Syrian army operation to liberate the eastern neighborhoods of Aleppo was over, and that the Syrian government troops were eliminating separate hotbeds of militant resistance.