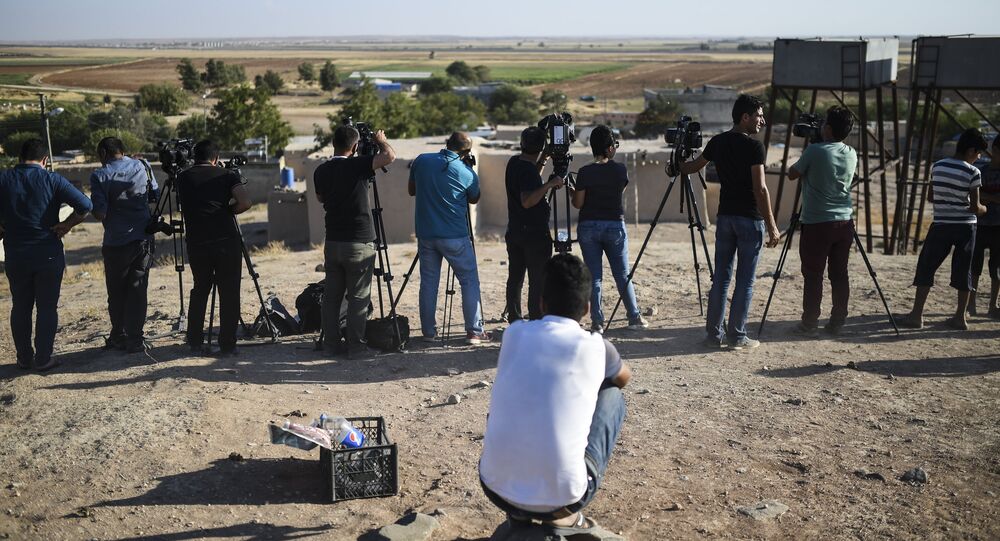 Mainstream media's biased approach to covering the situation in Aleppo is clearly aimed at destabilizing Syria and damaging the interests of Iran and Russia, journalist Sebastiano Caputo told Sputnik Italy.

© Sputnik / Mikhail Alayeddin
'Ideal Scenario': Aleppo Win a Result of Russia-Turkish Cooperation in Syria
In an interview with Sputnik's Italian edition, journalist Sebastiano Caputo slammed mainstream media outlets' biased approach to covering the situation in Aleppo which he said is all about destabilizing Syria and damaging the interests of Moscow and Tehran.

According to him, there is a constant stream of manipulated information, and mainstream journalists instead of traveling to the scene, focus on copying the news from television channels Al-Arabiya and Al-Jazeera, which are controlled by Saudi Arabia and Qatar, respectively.

These are the countries, he said, which have had their hands stained with the blood for more than five years, and which have not the slightest interest in providing any objective information.

"The purpose of their news is to try to destabilize Syria and deal a blow to Iran and Russia, because Saudi Arabia and Qatar are the US' allies in the Middle East. Covering the situation in Aleppo, Western journalists use anonymous sources and fake Twitter accounts, among other things. The Western media is hypocritical, and they show ordinary people allegedly being killed by only one side of the conflict," Caputo said.

"Amid the protracted speculation about the fight against the terrorists, we can see that the West's fight against jihadists is nothing but a farce," according to Caputo.

"Only three armies, the Syrian, Iranian and Russian ones, continue to combat the terrorists, suffering losses," he pointed out.

Caputo recalled that the so-called Syrian militants are none other than radical groups and mercenaries who "do not want to be filmed during the evacuation because they do not look like the Syrians."

"They include Georgians, Chechens, Afghans and Pakistanis," Caputo, who is the author of At the Damascus Gates, said.