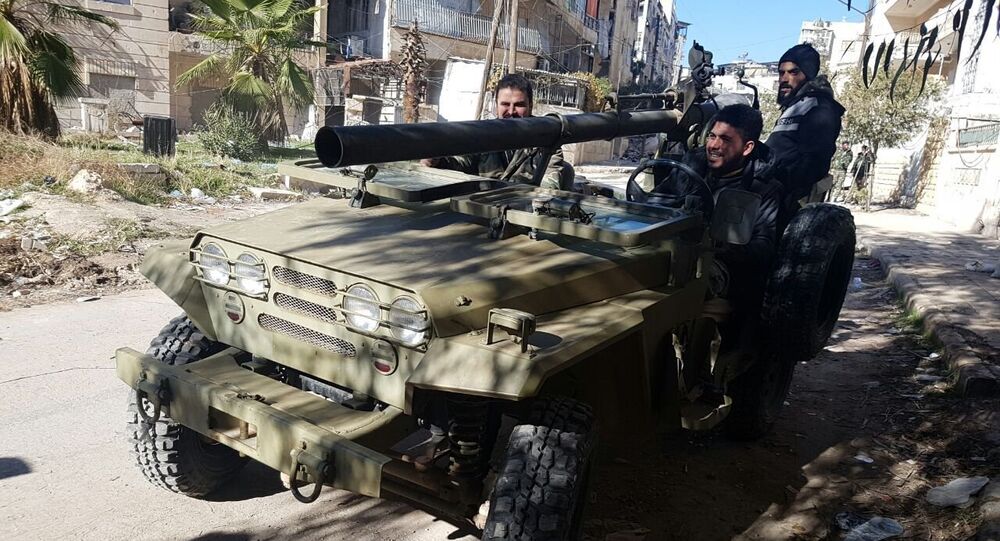 © AFP 2021 / KARAM AL-MASRI
Russia, Turkey Work on 'Constructive Atmosphere' for Syria Talks Despite Murder
In an interview with Sputnik Turkey, Bora Bayraktar, an expert on the Middle East, attributed Aleppo's liberation from terrorists to a Russian-Turkish deal protecting Syria's territorial integrity and keeping the United States from taking part in Aleppo's peace process.

Bayraktar stressed that although a number of factors prompted Moscow and Ankara to clinch the agreement, the key factor was their fundamental distrust of the United States.

Their distrust sharply intensified after a US-led coalition airstrike on Deir ez-Zor in September left about 80 Syrian soldiers dead, he explained.

"This incident undermined trust in the international coalition's and the actions of the US in Syria because the coalition's strike on Syrian troops actually supported the jihadists. I think that for Russia, it became a key turning point, which prodded Moscow to realize that the prospects for cooperation with Washington on the Syrian settlement are extremely vague," Bayraktar said.

He recalled that during a meeting in St. Petersburg on August 9, Russian President Vladimir Putin and his Turkish counterpart Recep Tayyip Erdogan agreed on "the protection of Syria's territorial integrity" and the need to "keep the US away from the settlement process."

"It is safe to assume that the Russian-Turkish agreement on Turkey works and brings results; it also points to the fact that Moscow and Ankara have the potential to implement a settlement plan in Syria," he pointed out.

At the same time, he warned that a political settlement in Syria will be a protracted process, which is unlikely to wrap up in in the next five months.

"In Syria, each and every player has and will have its own zone of influence, which is why tension in the region will most likely escalate in the future.For Russia, the key priority will be ensuring safety of the Latakia Air Base and the Port of Tartus, which are located very close to [the militant-held region of] Idlib. In this vein, defusing regional tensions would be an ideal scenario for Russia," Bayraktar said.

Touching upon the possible steps by the new US administration on Syria, Bayraktar mentioned the collapse of the Middle East-related projects implemented the government of outgoing US President Barack Obama.

"Under Donald Trump, Washington's policy [on Syria] will gain new rhetoric and a new direction. From a military point of view, Trump may continue the policy of the US presence in the region in a bid to counterbalance the Russian position. That, in turn, will determine the continuation of Turkey's active cooperation with Russia on the Syrian issue," Bayraktar concluded.

© REUTERS / Omar Sanadiki
Liberation of Aleppo 'Watershed Moment' Changing Course of History
Speaking to Sputnik Mundo late last week, Argentine journalist Leandro Albani said that the liberation of Aleppo by the Syrian Army has delivered a "heavy blow" to all the terrorist groups which have been fighting in the country for over four years.

Since Washington's only goal is to help those groups "regroup and rearm," the liberation of Aleppo is, probably, the "heaviest blow" by the Syrian Army to militants and their foreign sponsors, according to the journalist.

He also praised Russia's role as an important player helping to stabilize the situation in the war-torn country.