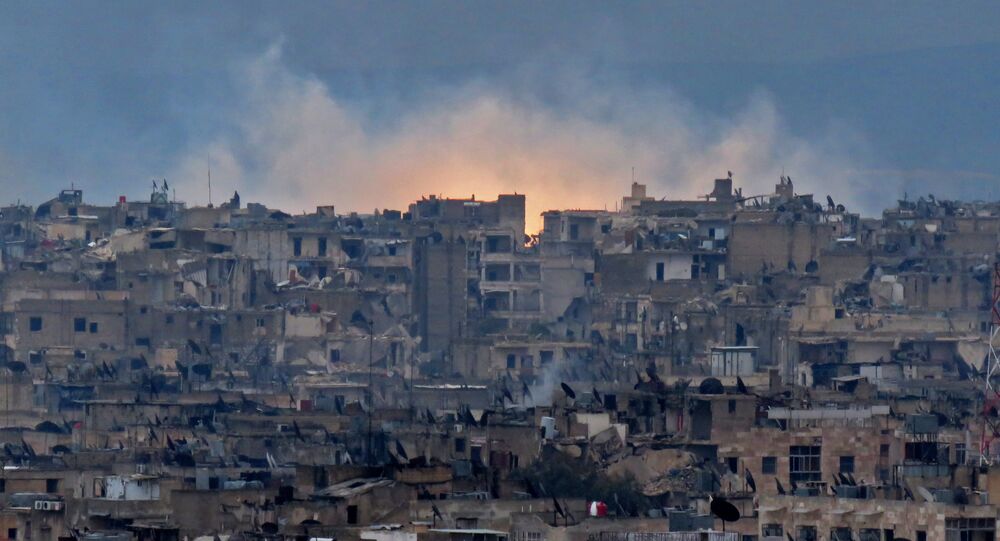 According to him, while some media outlets and Western politicians accuse the Syrian government of ceasefire violations, Syrian President Bashar Assad and his allies are putting maximum efforts to bring an end to the war.

"An information campaign launched against the Syrian government and Russia once again proves that the United States and its allies support terrorists in the Middle East," Hernandez told Sputnik Mundo.

© Photo : Vanessa Beeley
East Aleppo Liberation Proves Claims About Syrian Army's 'Atrocities' in Aleppo are 'Fake'
The journalist also suggested that concerns of those "sponsoring militants in Syria from abroad," is related to the fact that after terrorism is defeated they could tell the truth about the situation in Syria.

"As for video clips of Aleppo residents 'scared' of the Syrian Army, they are also a lie. I’m working in Syria and I saw the life of Syrians in the part of Aleppo controlled by government forces. The army did a lot to help people. At the same time, in the areas controlled by militants conditions for civilians were unbearable," Hernandez said.

© REUTERS / Omar Sanadiki
Mainstream Media 'Turning Truth Upside Down' Covering the Liberation of Aleppo
He suggested that attempts to "demonize" Russia’s actions in Syria are part of this disinformation campaign.

"Russia’s presence in Syria was authorized by the government while presence of other countries, for example the United States or Turkey, in Syria is not legitimate. They’re pursuing own goals there," he said.

"Western media and politicians are hypocritical about civilian victims in Syria. I saw militants firing a missile at a hospital in the center of Damascus. They also destroyed a school there. These were civilian districts. But mainstream media ignored that," Hernandez said.

On Thursday, Moscow called on UN institutions to stop being part of the "Western propaganda campaign" against Moscow and Damascus.

© REUTERS / Omar Sanadiki
Saudi Media Waging All-Out Information War, Spreading Fake Images of Horror in Aleppo [GRAPHIC PHOTO]
"We consider it a completely unacceptable situation when some senior members of the Secretariat of the United Nations are part of a propaganda campaign launched by some Western countries aimed at discrediting the anti-terrorist efforts of the Syrian authorities and the Russian Aerospace Forces," the Russian Foreign Ministry said in a statement.

According to Russian journalist and political commentator Alexander Khrolenko, the main reason behind the Western media hysteria about the situation in Syria is the fact the West is losing the fight against the Syrian government and President Bashar Assad.

"A US-led coalition is losing ground in Syria. For five years, Washington and its allies have been using opposition forces and jihadists in an attempt to topple Assad," Khrolenko wrote in a piece for RIA Novosti.