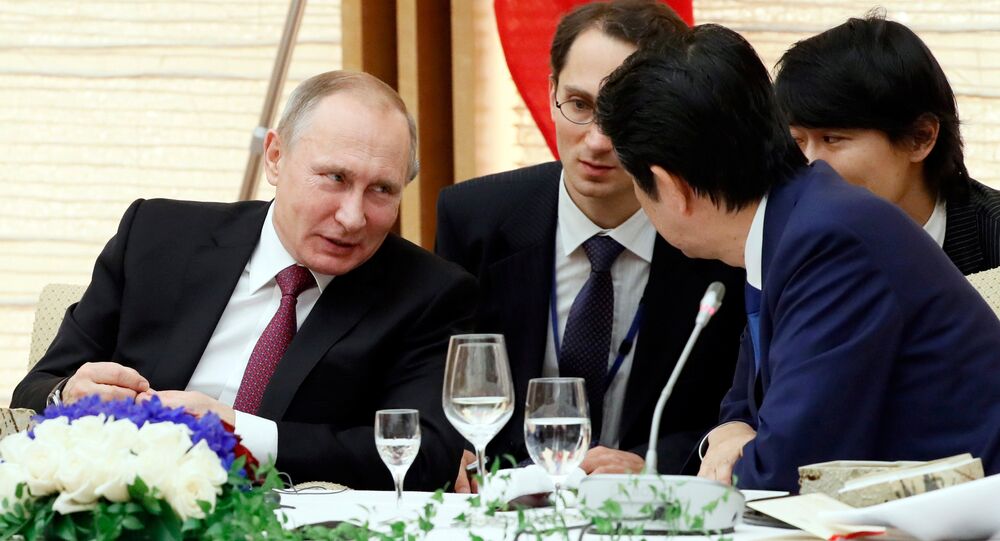 © REUTERS / Issei Kato
Japan's Police Enhance Security in Tokyo Ahead of Putin-Abe Talks
TOKYO (Sputnik) — Putin is visiting Japan on December 15-16. On Thursday, he held talks with Japanese Prime Minister Shinzo Abe in the city of Nagato in Yamaguchi Prefecture. On Friday, Putin and Abe met in Tokyo and discussed the possibility of signing a peace treaty between the two countries.

"As we know, this issue has been discussed for over 70 years. It would be naive to think that we can settle it overnight. But it is, of course, necessary to look for a solution which would meet both Russian and Japanese strategic interests and be accepted by the people of both countries," Putin said at a press conference following the meeting with Abe.

The president stressed that the technical state of war between the two countries is an outdated anachronism, adding that the settlement of the Russian-Japanese dispute over the Kuril islands may speed up the signing of a peace treaty.

"If we take the right steps in the direction set by the prime minister's plan, and the prime minister proposed to create a separate organization on economic activity on the islands and sign an intergovernmental agreement, we can on this basis create conditions allowing us to achieve a final decision on the peace treaty problem," Putin said. The president stressed that the technical state of war between the two countries is an outdated anachronism.

"If someone thinks that we are only interested in establishing economic ties, and are putting the peace treaty on the backburner, this is not true. I think that signing of the peace treaty is the most important thing, because it would create for us the conditions of long-term cooperation … This is more important than activities on the islands," Putin told a press conference.