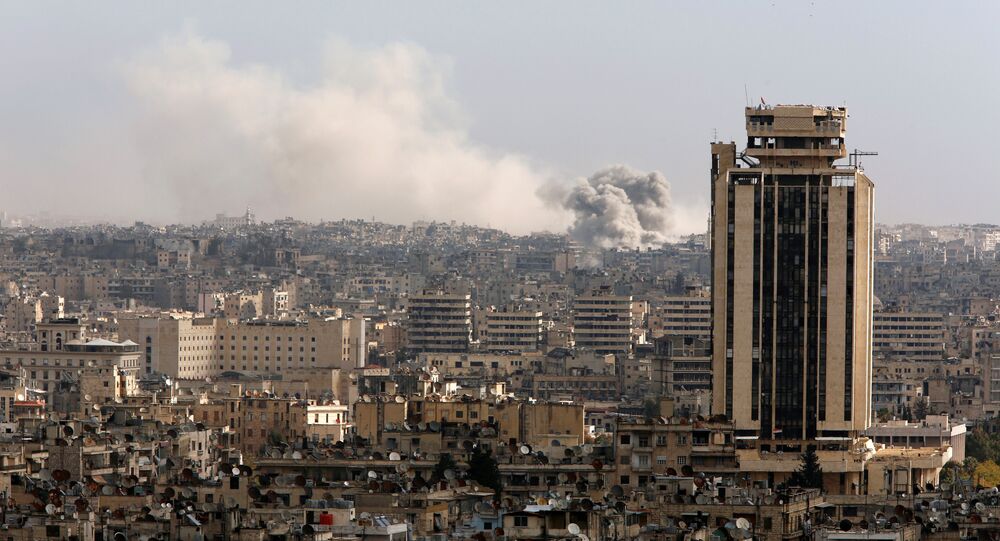 Syrian Ambassador to Spain Milad Atieh stated that the international community representatives occasionally hold conferences, where it is stated that the support for Syrian people will be provided, but "on the ground, they don’t do it."

"The government is rebuilding and trying to bring everything to work in Syria, even private and public institutions are working together, and the government is trying its best but we need the help of the international community and friends, Russian Federation, Iran, China, some other countries, to help us rebuild what has been destroyed by terrorists," Atieh said.

© REUTERS / Abdalrhman Ismail
Syrian 'Moderate' Rebels to 'Prefer Deal With Assad Than Align With Extremists'
According to the ambassador, terrorists and their supporters were "intentionally targeting" the most essential infrastructure in Syria from the beginning of the war.

Atieh added the international community representatives occasionally hold conferences, where it is stated that the support for Syrian people will be provided, but "on the ground, they don’t do it."

"Seventy-five percent of the humanitarian assistance provided to the Syrians inside Syria is done by the government," Atieh noted.

© AFP 2020 / George OURFALIAN
Syrian Army Displeases the West by Liberating Aleppo
Commenting on the Kurdish issue in Syria, Atieh said that it was not a real, but artificially made up to increase the pressure on the country's government.

According to the ambassador, the Kurdish issue in Syria has been intentionally presented as a problem by some powers working against the Syrian government.

"The Kurds are Syrian citizens. But during the crisis, some groups were polarised by some powers just to exert more pressure on the Syrian government," Atieh explained.

© REUTERS / Omar Sanadiki
Saudi Arabia, Qatar, Turkey, UAE Call for UN Emergency Special Session on Syria
The Syrian government has repeatedly said that negotiations with the Syrian Kurds could only happen under condition that every bit of the Syrian soil remains under Damascus' rule. In October, Syrian President Bashar Assad said that Kurds in Syria do not want autonomy, but in either case the issue should be resolved through a nation-wide referendum.

Syria has been in a state of civil war for over five years now, with the government forces fighting numerous opposition factions and extremist groups.