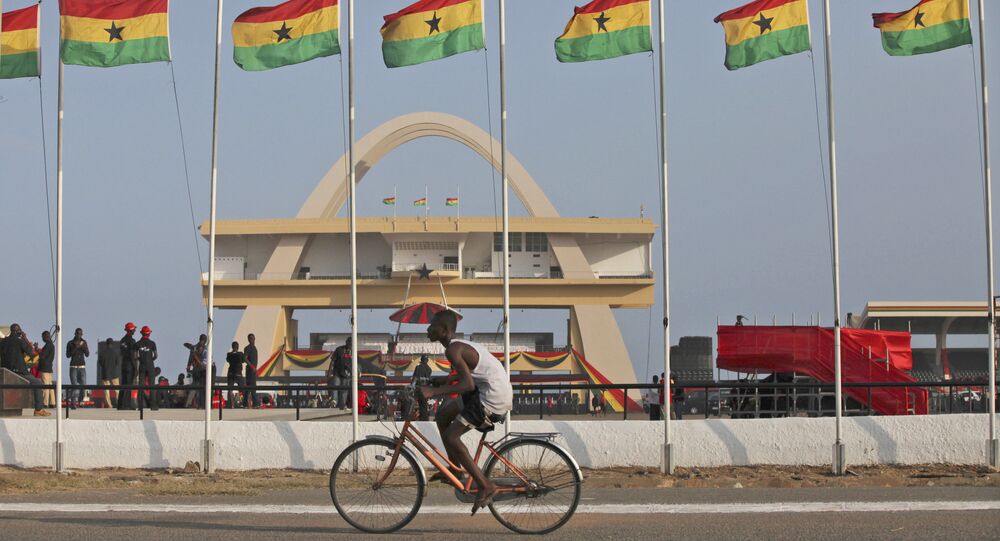 A fake US embassy operated in Ghana for ten years before being shut down last month, the US State Department reports.

Despite being a total sham, the "embassy" in Ghana's capital, Accra, did provide real, albeit fraudulently obtained, US visas and other documents, as well as counterfeit bank records, education records, birth certificates and more for $6,000, the State Department reported November 2.

"For about a decade it operated unhindered; the criminals running the operation were able to pay off corrupt officials to look the other way, as well as obtain legitimate blank documents to be doctored," the State Department report explained.

The run-down, unsecured two-story building apparently flew a US flag every Monday, Tuesday and Friday morning. Inside hung a photo of US President Barack Obama.

The fake embassy advertised its services with fliers and billboards and targeted citizens of Ghana, Cote d'Ivoire and Togo, the State Department said. It did not accept walk-in appointments; "instead, they drove to the most remote parts of West Africa to find customers," the State Department explained.

Victims would encounter "consular officers" who were actually Turkish citizens who spoke both English and Dutch. (A fake Dutch embassy has also been busted in Accra, Deutsch Welle reports, but officials in the Netherlands haven't yet confirmed this.) A Ghanaian immigration attorney and members of Ghanaian and Turkish organized crime rings were also involved, according to the State Department.

The 10-year-old embassy scam was found by Operation Spartan Vanguard, which was developed by the Regional Security Office at the actual US embassy in Ghana to address trafficking and fraud in the embassy and in the region, the State Department reported. The investigation was tipped off by an informant in another fraud investigation, who also alerted investigators to the fake Netherlands embassy.

Several suspects were arrested during a raid of the fake embassy and other sites that supported the long-running scam, and embassy and law enforcement officials found 150 passports from 10 countries; legitimate and counterfeit visas from the US, the Schengen zone, India and South Africa; and counterfeit identity documents at the site.

How many people traveled to the US on documents issued by the fake embassy is unknown, as are their motivations. Deutsche Welle reports that Western Embassies in Africa warn that criminal networks are active in the visa market there.

The real US embassy is a in a secure complex in one of Accra's most exclusive neighborhoods.

According to the State Department, Operation Spartan Vanguard has cut the export of fraudulent documents by 70%, but that with other investigations ongoing, this is only the beginning.

In China's Footsteps: What’s Behind South Korea Boosting its Presence in Africa