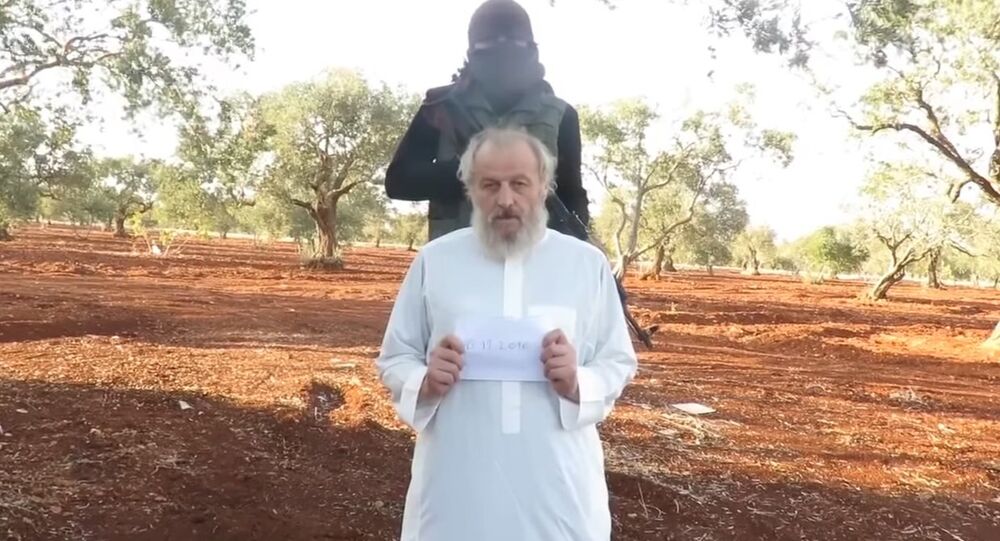 The story of Italian entrepreneur Sergio Zanotti, who was allegedly kidnapped in Syria by a group of terrorists, is raising more and more questions, according to Sputnik Italia.

Sputnik Italia managed to obtain a copy of correspondence between the News Front agency and a man named Almed Medi who says that he is a jihadist from Syria.

According to the correspondence, Olmedo sent News Front a video on November 15, in which Sergio claims to have been held in captivity over the past seven months.

Another video showed Zanotti saying that he may be executed.

"My name is Sergio Zanotti and for seven months I have been imprisoned here in Syria. I appeal to the Italian government to intervene for me before I am executed," says the man speaking with an apparently authentic Brescian accent.

Medi said that he decided to publish the video in order to "help this man" because the Italian government has done nothing so far to free the prisoner.

In an interview with Sputnik Italia, head of the News Front agency Konstantin Knyrik said that  the situation surrounding the alleged kidnapping Sergio Zanotti is rather odd, to say the least.

"We received the video with Zanotti from jihadists on November 22 and we published it only after we checked the identity of the man and his profiles on social networks which have been inactive as of this spring, that is, since the time of his abduction," according to Knyrik.

"Then we turned to our Italian colleagues and they confirmed that his passport and his manner of speaking indicate his Italian nationality," he said.

"Then, understanding that we could actually help the kidnapped person, we published a video on our YouTube channel and across every localized language version of our website. Simultaneously we emailed the relevant information to the Italian Foreign Ministry. It seems to me that it is very strange that Italian authorities continue to keep mum on the matter," Knyrik said.

© AFP 2021 / ISSOUF SANOGO / FILE
First Kidnapping of American Reported in Niger
He added that the jihadists promised to send one more video showing the execution of Sergio Zanotti to the News Front agency, but that Almed Medi's Facebook account has been blocked since then.

Also, Knyrik drew attention to the fact that information about the alleged kidnapping of Zanotti appeared in Italian media outlets almost a week after the News Front's publication.

"Right now, we have no information about the fate of Sergio Zanotti and the jihadists' ransom demands," Knyrik said.

US Warns of Foreigner Kidnapping Threats in Philippines - Embassy

Former CIA Officer Could Be Extradited to Italy Over Cleric Kidnapping