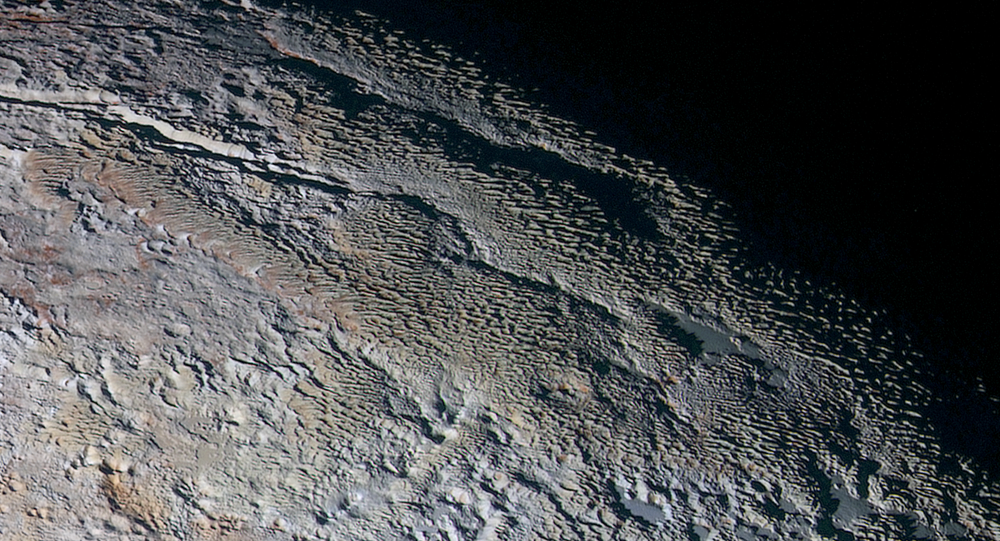 Exotic forms of life may exist in Pluto’s slushy ocean, according to professor William McKinnon from Washington University in St. Louis, Missouri.

The dwarf planet's most remarkable geological feature is Sputnik Planum, a heart-shaped basin beautifully photographed by the LORRI instrument aboard NASA's New Horizon spacecraft in July 2015.

© NASA . Ames Research Center
NASA to Outline Guidelines Protecting Earth from Alien Life Forms
McKinnon, a coauthor of two new Pluto studies published December 1 in Nature, described the eye-catching image as not just "the heart of Pluto," but "the beating heart." He, along with other researchers, have concluded that beneath layers of frozen nitrogen and water ice there must lie a subsurface ocean some 600 miles wide and over 50 miles deep.

Steven Vance, an astrobiologist and geophysicist at NASA JPL, previously suggested that Pluto's ocean might consist of alcohols, hydrocarbons and more complex molecules that would not just act as an antifreeze, but also form a chemical basis for life. However, McKinnon argues that the "syrupy" liquid is also steeped in ammonia, stemming from the fact that New Horizons detected ammonia as a compound on Pluto's big moon, Charon, and on one of its small moons.

Pluto’s icy heart. How did it form? Is there a subsurface ocean? Scientists probe the mystery: https://t.co/PCJelwDpBk @NASANewHorizons pic.twitter.com/ezF2sNlZaj

​"What I think is down there in the ocean is rather noxious, very cold, salty and very ammonia-rich-almost a syrup," he reported. "It's no place for germs, much less fish or squid, or any life as we know it. But as with the methane seas on Titan-Saturn's main moon-it raises the question of whether some truly novel life forms could exist in these exotic, cold liquids."

According to McKinnon, the immense amount of ammonia could not be tolerated by conventional forms of life, adding that "the best you could hope for is some extremely primitive kind of organism. It might even be pre-cellular, like we think the earliest life on Earth was."