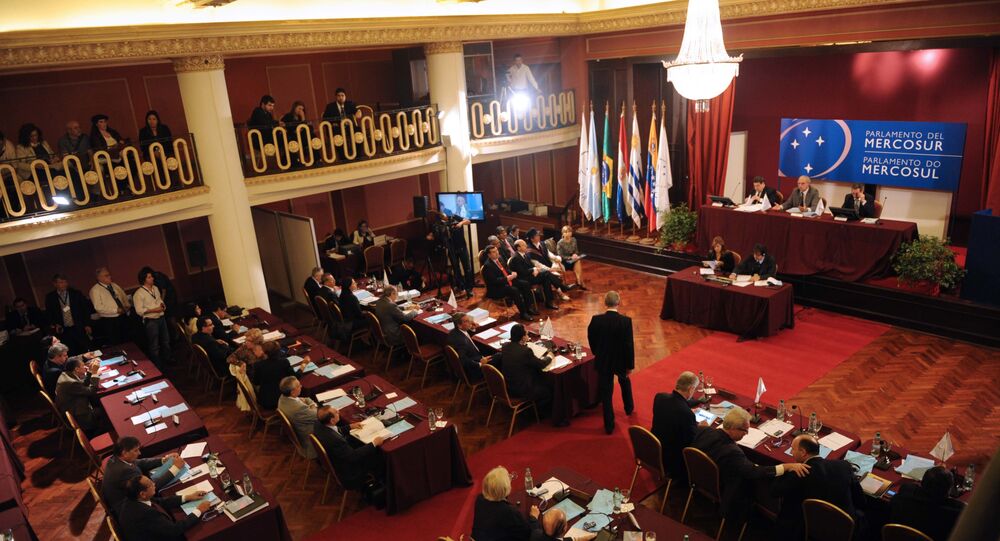 The EU parliament is deeply mistaken in portraying Sputnik and RT as elements which destabilize and weaken European international laws, according to the statement of Jorge Taiana, member of the Progressive Caucus of the Latin American Mercosur trade bloc parliament (Parlasur).

The progressive bloc includes 48 members of the parliament from Argentina, Brazil, Uruguay, Paraguay and Venezuela. Its member, Jorge Taiana, is the Parlasur's chair.

"We are in solidarity with Sputnik news agency and RT broadcaster with regards to the recent European Parliament resolution on 'EU Strategic Communication to Counteract Propaganda Against It by Third Parties.' The EU parliament is deeply mistaken in portraying these media outlets as elements which destabilize and weaken European international laws," the Progressive Caucus said in Thursday's statement, signed by all of its members.

Last month, the European Parliament voted in favor of a resolution on countering Russian media outlets, such as the Sputnik news agency and the RT broadcaster. As many as 304 voted in favor of the document, 179 voted against and 208 abstained. With a total of 691 officials taking part in the vote, less than half supported the resolution.

Sputnik responded by calling the move a direct violation of media freedom and human rights, while Russian President Vladimir Putin commented on the matter by pointing out that the document indicates a degradation of democracy in the West. Praising Sputnik and RT for their work, the president expressed hope that real media restrictions would not follow. The resolution has also been criticized by a number of journalists' organizations across the world.

Parlasur was formed in 2006 and at first comprised members of Mercosur member states' parliaments. The body is now undergoing a transition to a direct election system.