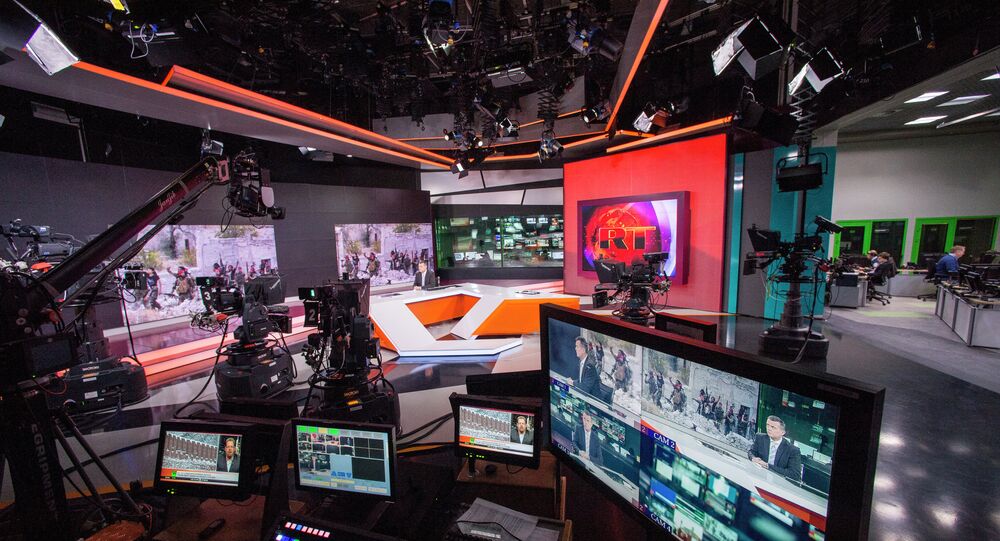 Prominent media figures in Syria, Egypt and Lebanon have harshly criticized the EU Parliament's resolution on countering Russian media which one of them said is nothing but "part of the information war against Russia."

The resolution is aimed at countering anti-EU media campaigns and misinformation ostensibly spread by both nations and non-state entities, including Russia and Daesh. The document says that the Russian government is allegedly "aggressively employing a wide range of tools and instruments" to weaken the European Union.

Speaking to Sputnik, Imad Sara, head of Syria's TV and Radio Broadcasting Central Committee, said that the resolution "indicates the degree that Russian media influence's the world" and the West's double standards on freedom of speech.

"I think that such statements are part of the war being waged against Syria and Russia. On one front we see grenades and bombs, while on another one — laws and sanctions," Sara said.

© Sputnik / Alexandr Kryazhev
EU Parliament Resolution on Countering Russian Media Shows Brussels is 'in Panic Mode'
Sara's views were echoed by Nivin Shahata, editor-in-chief of the Egyptian newspaper "Al-Ahram", who told Sputnik that he has "great respect for the Russian media" and that he is sure about its "honesty, objectivity and impartiality."

"In Russia, we can really see freedom of speech and human rights for everyone, with the opposition freely expressing their position. The EU's decision is a blow to not only Russian media, but Russia's policy as well," Shahata pointed out.

In an interview with Sputnik, Naser Kindil, chief editor of the Lebanese newspaper Al-Binaa, congratulated "the Russian media with this decision by the European Union which may be called a recognition of its good quality work."

"European and US media outlets have long painted the Russian media as biased and unprofessional. Now the Russian media have showed themselves as a reliable source of information. Their stance is to be reckoned with and their assessment of events contradicts that of the West. The Russian media call a spade a spade, which is why people believe them. Congratulations again," Kindil said.

"We condemn this resolution and call on the European Union to return to its basic principles it is talking about. We declare that we are on the side of responsible free media, and together with you emphasize the importance of media freedom in the world which is in the interest of the media and all the people," El Khazen said in a telegram.

"The decision to adopt the resolution was made by the colonial powers which do not like to see a different stance on world events," the resolution said, urging all the rights organizations to express their solidarity with Sputnik.

According to the statement, such decisions by the EU run counter to the principles of human rights that Europe is so proud of.

© Sputnik / Konstantin Chalabov
EU Resolution Against Russian Media Exposes 'Degradation of Parliamentarism'
Earlier this week, the EU Parliament okayed a draft resolution proposed by EU lawmaker from Poland Anna Elzbieta Fotyga "On EU strategic communication to counteract propaganda against the bloc by third parties", which says that Russia is allegedly engaged in propaganda against the European Union.

A total of 691 lawmakers participated in the vote: 304 voted in favor of the resolution, 179 against it and 208 abstained from voting. The authors of the document equate counteracting Russia with the resistance to Daesh terrorist group and call on EU member states to boost financing counter-propaganda projects.