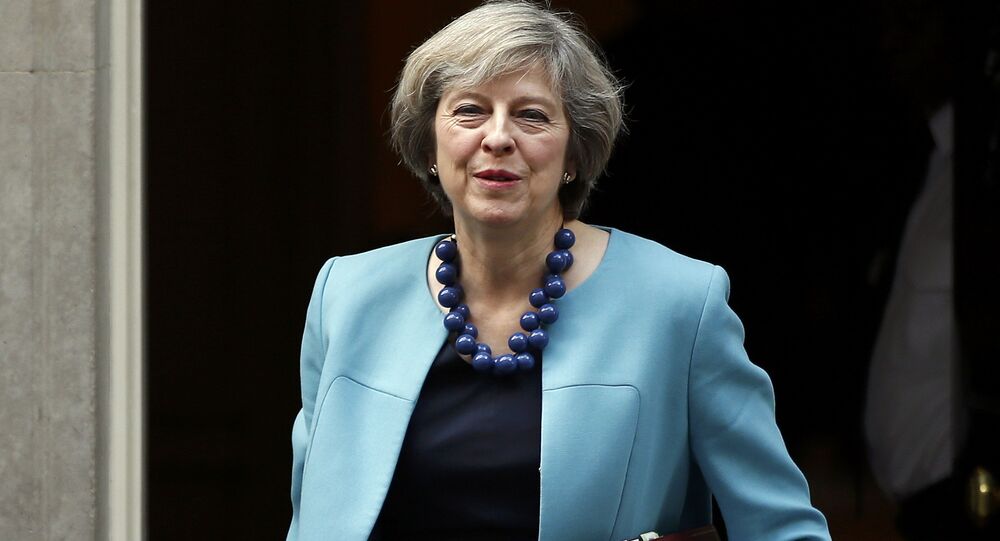 Britain should lead in the transformed modern world after leaving the European Union, UK Prime Minister Theresa May said in speech.

© AP Photo / Kirsty Wigglesworth
Scotland May Seek to Become European Economic Area Member After Brexit
MOSCOW (Sputnik) — The UK leadership should be "calm and determined" to "shape a new era of globalisation that genuinely works for all," she said.

"We can rise to this moment and seize this great global opportunity of our time, to provide the leadership that will ensure the prosperity of your businesses, the success of our country, and the future of the world we want to leave for our children," May said at the Lord Mayor's Banquet on Monday as quoted by the government’s website.

May emphasized that Britain was already playing "a pivotal role in meeting so many of the global challenges" that affect the world’s security and prosperity.

She stressed that the United Kingdom should remain the "global champion of free trade" after Brexit, therefore it was necessary to secure "right deals" for Britain.

"As we leave the European Union, we will also use the strength and size of our economy to lead the way in getting out into the world and doing new business with old allies and new partners alike. We will use the freedoms that come from negotiating with partners directly, to be flexible, to set our own rules and forge new and dynamic trading agreements that work for the whole UK," May said.

She added that the UK government should ensure that all citizens benefit from new trade opportunities that would emerge after Brexit.

The prime minister mentioned the new industrial strategy being developed by government aimed at strengthening all spheres.

© CC BY 2.0 / Jonathan Rolande / House Buy Fast.
Brexit Talks May Be Postponed Over Cabinet Split, Workload
"This won’t be about propping up failing industries or picking winners – that is the job of competition and free markets. It will be about getting Britain firing on all cylinders again by creating the conditions where winners can emerge and grow, across all sectors, in all parts of the country and for the benefit of all," May said.

She added that the government would do everything possible "to make the UK outside the EU the most attractive place for businesses to invest and grow."

On June 23, the United Kingdom held a referendum to determine whether or not the country should leave the 28-nation bloc. According to the final results, some 52 percent of voters decided to support Brexit. Following the referendum, May said that she intended to trigger Article 50, the formal step needed for withdrawing from the bloc, at the end of March 2017.