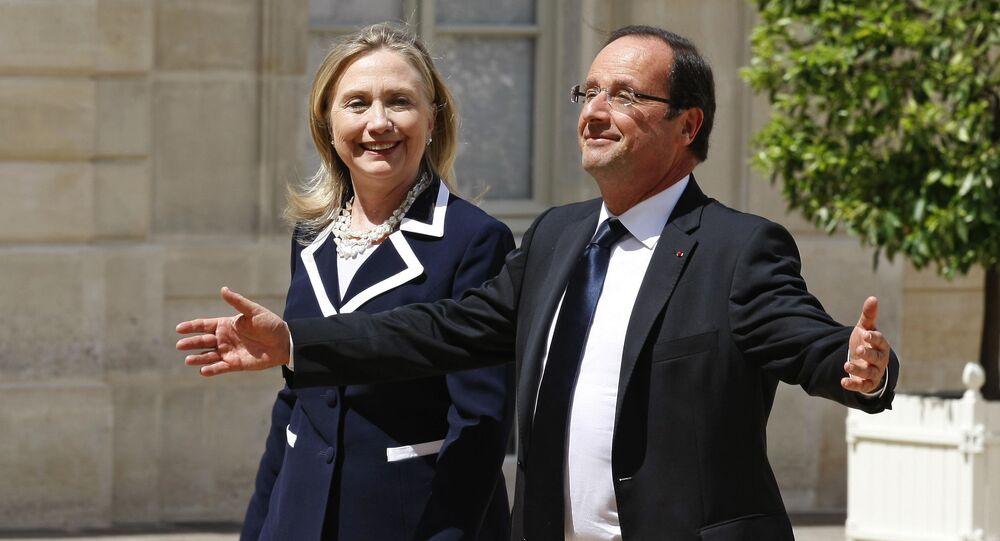 Twist in History: Clinton, Hollande Descendants of the 'Accursed Kings'

Jean-Louis Beaucarnot, a French genealogy specialist and respected author of many books on the subject has recently made an interesting revelation: US presidential candidate Hillary Clinton is distantly related to French President Francois Hollande; both share royal blood from the so-called French "Accursed Kings" of the 14th century.

In his recently released new book "Le Dico des Politiques" the scientist reveals that the two even share royal blood from the so-called French "Accursed Kings" of the 14th century.

"I have three hobbies: literature, genealogy and politics. I have applied all three together in the recently released book "Le Dico des Politiques," the scientist told Sputnik France.

"In this book, I apply my own method of studying politicians: I study their place of origin, where they are from geographically, their family roots, background, kinship, relatives and their path," he said.

"This combination of several approaches enables us to better study them as people, therefore I have been able to make several revelations, reveal the family ties and roots that nobody had previously suspected," the genealogist explained.

He further said that with regards to Hillary Clinton, he was able to learn that the US politician has ancestors from all over the world, most prominently from England.

However, Clinton, whose maiden name is Rodham, descends on her mother's side from families from Canada's French-speaking province of Quebec.

Further research revealed that 23 generations back, the US politician was related to king Louis X le Hutin, known as "Louis the Stubborn" in English, one of the so-called "Accursed Kings" (Les Rois maudits), who got their name after a sequence of seven historical novels by French author Maurice Druon about the French monarchy in the 14th century.

Interestingly enough, Louis X died after only 18 months on the throne, officially from pneumonia, although some historians have suggested he might have been poisoned.

His successor was his brother, Philip V, known as “Philip The Tall”, an ancestor of the acting French President Hollande.

While Republican candidate Donald Trump traces the paternal side of his family back to the German town of Kallstadt. Trump’s grandfather Friedrich emigrated from there to the US in 1885 where he started working as a hairdresser in New York before being lured by the gold rush further west.