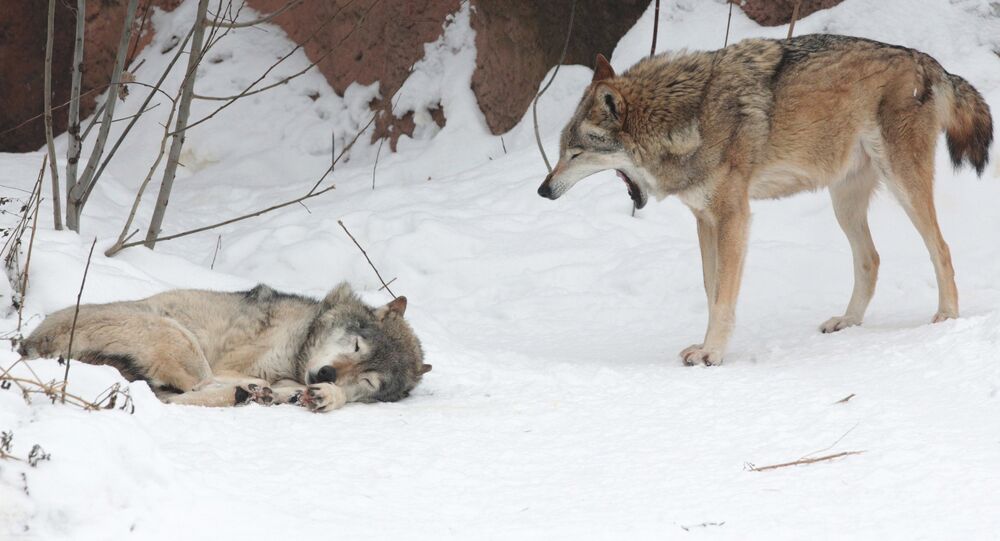 It might sound like a Grimm Brothers' fairy tale - or all the stereotypes about Russia rolled into one - but some schoolkids in the Russian Republic of Bashkiria are travelling to school armed with hatchets...to protect themselves against wolf attacks.

Sarcasmonaut
Face-to-Face With Monster Black Bear
“Once our sons, aged 12 and 14, were on their way home when, all of a sudden, they saw a wolf running right at them,” the kids’ parents told  local media.

Yevgeni Seberov, a local forester, said that when stumbling upon a wolf or any other dangerous predator one should never run off like the two boys did.

“If you start running the wolf’s natural killer instinct immediately kicks in, which means that you are done for. To keep it away you must move in groups and make as much noise as you possibly can,” Yevgeny said. He added that wolves are very cautious animals and they will not attack if they are not hungry.

“They can jump you at night but hardly in broad daylight.”

Another former forestry serviceman said a slingshot might be much more effective. But both men agreed the most important thing was not to panic and not to show the animal fear.

Meanwhile, local children’s ombudswoman Milana Skorobogatova dismissed the whole story as an April Fool’s Day joke because she had never heard about any wolves wandering around, much less about any axe-toting kids.

What she didn’t comment on, however, was the video where the boys are seen walking around with axes in hand.

Earlier a video of a Swedish man who showed enviable self-control when seeing a wilf bear poised to attack him went viral.

“I screamed as loud as I could and made myself look as big as possible," Ralph Persson told local Helahalsingland, adding that “you have to treat animals with respect.”

Well, Ralph Persson seems to be a lucky man. All those who may be less lucky are strongly advised to avoid any unnecessary encounters with wild bears.

Across the ocean, in California, a Los Angeles man managed to fight off a bear suffering only minor injuries while on a hiking trip in the local mountains.

The unidentified 53-year-old man was blindsided by a huge bear as he was on a trail in the foothills of the San Gabriel Mountains northeast of Los Angeles.

"The hiker ran into a bear, and the bear went up on its hind legs," Officer Joe Lazcano with the Sierra Madre Police told the Daily News.

Terrified, the man backed away only to see another bear on his left side ready to attack him. The man was knocked down and suffered injuries which, happily, proved not to be life-threatening. He somehow managed to fight off the bear and later found his way out of the wilderness.

In another display of rare daring a Colorado mother fought off a mountain lion after the animal pounced her five-year-old son.

She later told police that the boy was playing outdoors when, suddenly she heard loud screams. The woman ran out of the house and “physically removed her son from the mountain lion," according to a statement released by the local police department.

The boy and his audacious mom were rushed to a nearby hospital and were later released with minor injuries.

The Romans used say that “Fortune favors the brave and the bold.” But there's probably a bit of luck involved as well.

Dashing Through the Snow: Russian Bear on Snowboard Killing It