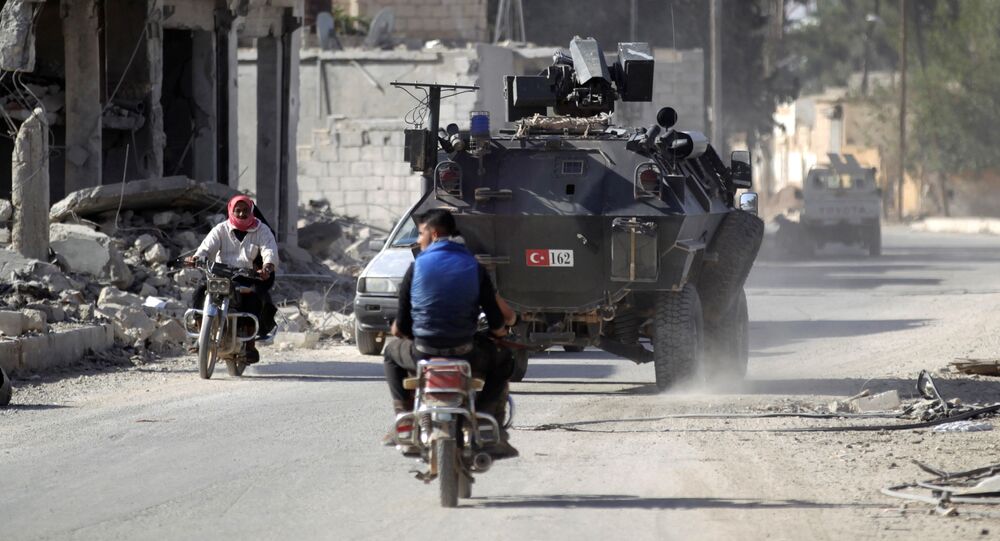 © AFP 2020 / OZAN KOSE
Turkey Seeks Cooperation With 'Friendly' and 'Reliable' Russia, Rather Than West
In an interview with Sputnik Turkey, Turkish Deputy Prime Minister Veysi Kaynak said that it was a deal clinched between Russia and Turkey that contributed greatly to the implementation of Ankara's Operation Euphrates Shield to liberate northern Syria from Daesh (ISIL/ISIS) terrorists.

The interview came after Russian President Vladimir Putin's address last week to the 13th annual Valdai Discussion Club session in Sochi, in which he specifically warned against countries interfering in the internal affairs of other countries.

As an example, Putin pointed to the attempted coup in Turkey this summer, quoting Turkish President Recep Tayyip Erdogan as saying that the coup attempt was carried out by groups endorsed by an organization led by self-exiled Muslim cleric Fethullah Gulen, who has lived in the US for nine years.

© AFP 2020 / Nazeer al-Khatib
Turkish soldiers fire an upgraded M60 tank during fighting against Daesh terrorists near the northern Syrian village of Beraan, north of the embattled city of Aleppo, on October 24, 2016

"I think, that it is absolutely unacceptable," Putin said.

Speaking to Sputnik Turkey, Kaynak heaped praise on what he touted as Putin's "balanced and constructive stance" which he said is of great importance to developing bilateral relations between Turkey and Russia.

"Operation Euphrates Shield against Daesh in Syria was implemented thanks to an agreement between Turkey and Russia. Moscow is our important partner, both in the energy and trade sectors, and in terms of regional policy. Putin's statement [during the Valdai Club session] was another indication of Russia's political will to swiftly return to the pre-crisis level of bilateral cooperation," he said.

Separately referring to Gulen, Kaynak said that it is impossible to realize and accept the fact that the leader of the criminal group masterminded the attempted coup in Turkey while living in the US, Turkey's strategic ally.

"In this vein, a statement by Putin deserves approval and plays a significant role from the point of view of bolstering bilateral relations between Turkey and Russia," he pointed out.

On August 24, Turkish forces, backed by US-led coalition aircraft, began a military operation dubbed Euphrates Shield to clear the Syrian border town of Jarabulus and the surrounding area of Daesh militants, outlawed in Russia and many other countries.

As Jarabulus was retaken, the joint forces of Ankara, the coalition and Syrian rebel groups continued the offensive southwest.

For seven months, bilateral ties were virtually frozen. In June 2016, in a message to Vladimir Putin, the Turkish President expressed his desire to normalize relations and apologized for the death of the Russian pilot.

On August 9, 2016, Putin and Erdogan met in St. Petersburg for the first time since the crisis in bilateral ties. At the meeting they agreed to restore cooperation in all areas.

Syrian Crisis to Bolster 'Dialogue Between Turkey and Russia'