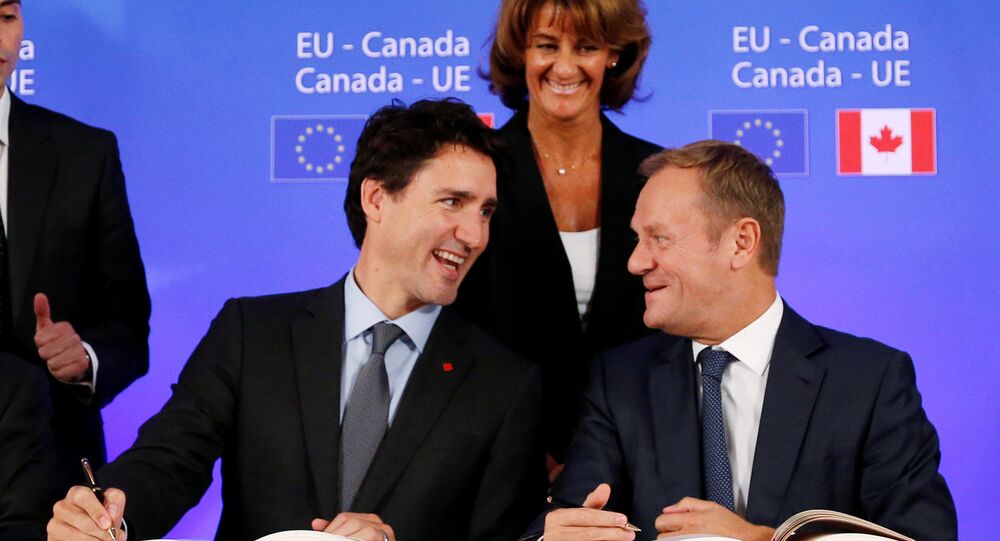 © AP Photo / Francois Mori
CETA Trade Deal 'Interfering With Democratic Institutions in EU and Canada'
In an interview with Sputnik, Guy Taylor, trade campaigner at the social justice organization Global Justice Now, pointed to the lobbying pressure the corporate world used to support the establishment of the Comprehensive Economic and Trade Agreement (CETA).

The interview came after the European Union and Canada signed the CETA late last week.

"There were several meetings between the European Union and the business world to discuss the CETA, and there was big pressure from the corporate world to get this deal through," Guy Taylor said.

He recalled that to enter into full force, the CETA should be ratified by about 40 national and regional parliaments in Europe, and that the deal may finally face a flop.

"Public opinion is growing on this issue and the pressure is building," he said, referring to popular opposition to the CETA.

Touching upon the economic aspects of the agreement, Taylor once again underscored that there was a strong push from the business world from "both sides of the Atlantic" to clinch the CETA.

© REUTERS / Francois Lenoir
Belgian FM Signs CETA After Deal Almost Collapsed Due to Wallonia's Opposition
Speaking to Sputnik earlier this month, German MP Andrej Hunko of the Left Party slammed the CETA as a document that he said "interferes with democratic institutions."

He said that "millions, the majority of population" in many countries, including Germany, have "been critical" of CETA.

The partial implementation of the deal will start after the European Parliament adopts the document. To enter into force, CETA should be ratified by all European Union members.

CETA aims to establish a free trade zone between Canada and the European Union. In 2013, Ottawa and Brussels reached an agreement on key elements of the deal.

European critics of CETA claim it would undermine standards and regulations on environmental protection, health and safety and workers' rights.

© Flickr / Campact
This is Why It is 'Impossible' to Sign EU-Canada CETA Deal on Thursday
On the other side of the Atlantic, critics worry that European corporations could sue the Canadian government when they feel that a regulation adversely affects their potential profit. To make matters worse, the disputes are resolved outside Canada's national court system.

CETA is seen as a Canadian version of the better-known Transatlantic Trade and Investment Partnership, a proposed trade agreement between the United States and Europe which has been shrouded in secrecy.

The agreement was at first blocked by the Belgium's French-speaking region of Wallonia but on Thursday, Belgian Prime Minister Charles Michel said that the parties had finally managed to reach a consensus.