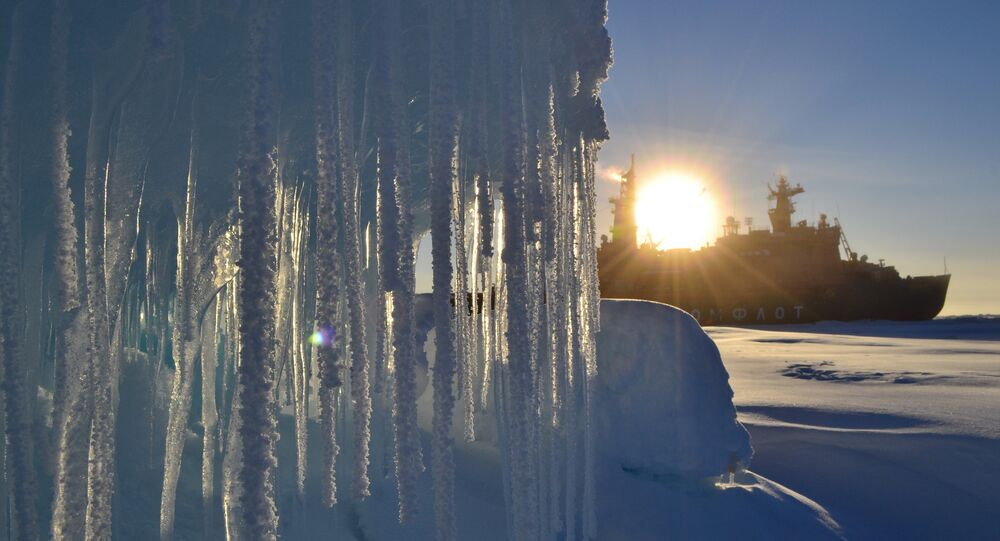 US Special Representative for the Arctic stated that cooperation between the United States and Russia within the framework of the Arctic Council has remained unaffected by the heightened tensions between the two countries.

© Sputnik / Valeriy Melnikov
Russian Activities in Arctic Defensive, New US-Russia Agreements Not Needed - US Envoy
WASHINGTON (Sputnik) – Cooperation between the United States and Russia within the framework of the Arctic Council has remained unaffected by the heightened tensions between the two countries, US Special Representative for the Arctic Adm. Robert Papp told Sputnik.

"In spite of the increased tensions and that the fact that we feel very strongly about the aggression that is taking place in Ukraine, our business within the Arctic Council has gone on with the sense of cooperation," Papp stated on Tuesday. "I am very happy with the way Russia has cooperated in our Arctic Council business, and I am confident that will continue."

US-Russian relations began deteriorating in 2014 in the wake of what many consider was a coup in Ukraine, followed by Kiev's military operation against militias in the country's southeast as well as Crimea’s reunification with Russia.

The United States, the European Union and their allies imposed sanctions on Russia for its alleged involvement in Ukraine’s affairs — an accusation Moscow has repeatedly refuted.

The United States expects Russia to continue to maintain the Arctic environment regardless of the equipment utilized there, Robert Papp told Sputnik on Tuesday when asked whether Washington has any concerns about possible impact on Arctic ecology of Russia’s use of non-US equipment.

The current US sanctions imposed on Russia target the country’s key economic areas — energy, defense and banking. Technology trade restrictions specifically outlaw the export of US products destined for deep-water and Arctic oil exploration and production, as well as shale oil projects in Russia.

"I am very hopeful and my sense is that Russia has an increased sensitivity to the responsibilities of maintaining the Arctic environment," Papp said. "The people in Russia that I have dealt with are very sensitive to that fact, and I am very hopeful that they will continue to be regardless of the types of equipment that they use up there."

Since 2014, relations between Russia and the West have deteriorated amid the crisis in Ukraine. The United States, the European Union and some of their allies have introduced several rounds of sanctions over Moscow's alleged involvement in the Ukrainian conflict and after Crimea decided to reunify with Russia via a popular referendum.

Russia has repeatedly refuted all allegations and warned that the Western sanctions as well as military moves on Russian borders are counterproductive and undermine regional and global stability.

The Arctic shelf is believed to hold enormous deposits of oil and natural gas. According to the Russia’s Ministry of Natural Resources, the total value of energy resources concentrated in Russia's Arctic region exceeds $30 trillion. Ministry experts predict that in the future, Russian oil and gas production will be mainly concentrated on the Arctic sea shelves.

Russia has done a maximum effort to validate its claim in the United Nations to extend its share of the Arctic continental shelf, US Special Representative for the Arctic said.

"Russia has been doing everything they’re supposed to do to document their claim," Papp said on Tuesday. "Russia has demonstrated that they will comply with the Law of the Sea Treaty."

Papp noted that Russia’s claim was likely to overlap with those of Canada and Denmark, but that Moscow had previously negotiated with Norway to settle similar boundary issues.

"So far, they have been doing everything the right way in accordance with the Law of the Sea," he added.

Papp explained that the process requires nations to collect data and make observations on the contours of its continental shelf before submitting that information to the United Nations Commission on the Continental Shelf, which was established under the Law of the Sea Treaty. Only then the commission can decide whether a claim is valid.

Last month, Danish Foreign Minister Kristian Jensen said it was too early to agree to bilateral talks with Russia to settle the Arctic boundaries, citing concerns about Canada's reaction.

Russia is claiming an area of 500,000 square miles in the Arctic with as much as 5 billion tons of hydrocarbon reserves, according to the expert estimates. Russia’s claims overlap those filed by Denmark in 2014 by about 212 square miles.

Lavrov Participation in Next Arctic Council One of Major US Priorities

Russia to Put Into Operation 560 Military Facilities, Including in Arctic