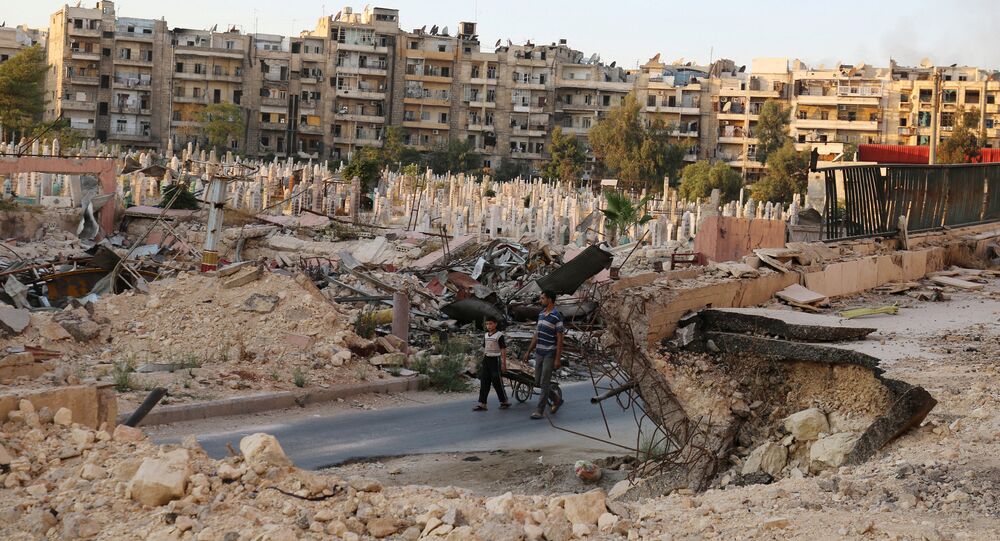 Moscow and Washington will be unable to clinch any breakthrough agreements on Syria before the end of the election campaign in the United States, according to Konstantin Kosachev, head of the Foreign Affairs Committee of the upper house of Russia's parliament.

© Sputnik / Aleksey Nikolskyi
Washington 'Has Neither Sticks nor Carrots' to Influence Russia in Syria
Konstantin Kosachev, chairman of the Foreign Affairs Committee of the Federation Council, the upper house of the Russian legislature, predicted that Russia and the United States will not ink any breakthrough deals on Syria before the end of the US election campaign.

He recalled that Russian Foreign Minister Sergey Lavrov and US Secretary of State John Kerry have more than once found common ground on the Syrian issue.

But Kerry's attempts to implement the agreements were invariably followed by a statement from Washington that these deals should be corrected or cannot be fulfilled at all, according to Kosachev.

As a result, Russia repeatedly faced a situation where the US branches of power called for different solutions to the Syrian crisis. In an interview with Sputnik, political analyst, associate professor at the Financial University under the Government of the Russian Federation Gevorg Mirzoyan specifically pointed to US President Barack Obama's ever-fading political clout.

"The matter is that the Pentagon sees Obama as a lame duck president who is unable to make difficult decisions, which in turn damages US interests.The Pentagon continues to urge Obama to launch a military operation in Syria, while the politicians perfectly realize the serious consequences of such actions," Mirzoyan said.

According to him, the Obama administration, unfortunately, is failing to take control of the country's law enforcement agencies and their allies, which is why trying to agree with the current US government on Syria makes no sense.

"And not because of our bad attitude to the United States, but because we understand that at the moment, Americans are not able to adhere to the agreements [on Syria]," he said.

© AFP 2021 / AHMAD ABOUD
Deir ez-Zor Attack 'Further Poisoned Mistrustful Relations' Between US, Russia
Meanwhile, many experts fear that the situation may finally lead to a total lack of understanding between the parties and the implementation of the Pentagon's so-called Plan B on Syria, which stipulates launching airstrikes on Syrian government forces.

Some political commentators claim that the Pentagon is already dealing with the so-called "escalation for the sake of de-escalation" plan. Mirzoyan, for his part, did not rule out such a scenario.

"Many in the Pentagon are really poised and ready to resort to the use of force in order to resolve the Syrian conflict. Therefore, the danger of escalation is very likely," he said, adding at the same time that Washington's European partners will hardly support the Americans' push for escalating the conflict.

As far as the Syrian issue is concerned, Mirzoyan expressed hope that a chance to return to the negotiating table and reach a breakthrough agreement may only appear after the new US administration comes to power.

Even given the fact that both Hillary Clinton and Donald Trump are known for their hardline stance on foreign policy, reaching a consensus on Syria will be a task that in any case should be solved by Obama's successor, according to Mirzoyan.

"It doesn't matter to Russia whether the successor will be Clinton or Trump. The main thing is that upon coming to power, the new US administration will not only take but also implement their decisions," he said, warning against demonizing Clinton's image.

As for the Pentagon, he added, it may change its hawkish stance after the new US administration is in office, something that will help Russia and the United States return to dialogue.

"I feel that Moscow and Washington have a common interest when it comes to Syria, namely, to end the civil war there. Although their approach to the problem differs, one thing is clear: neither Russia nor the United States want to be involved further in the Syrian war," Mirzoyan said.

© AP Photo / Susan Walsh
‘Nothing More’ For US, Russia to Talk About to Reduce Violence in Syria - White House
He pointed out that Americans currently suffer huge image losses and that they already do not know where to find allies on Syria. That is why arriving at a political accommodation on the matter is of interest both to Russia and the United States.

Earlier this week, the US State Department announced that it was suspending the bilateral channels with Russia that had been established to sustain their cessation of hostilities agreement in Syria.

Russia responded with suspending a number of agreements with the United States, including those on cooperation in scientific research and the development of the nuclear and energy sectors and the plutonium disposal agreement.