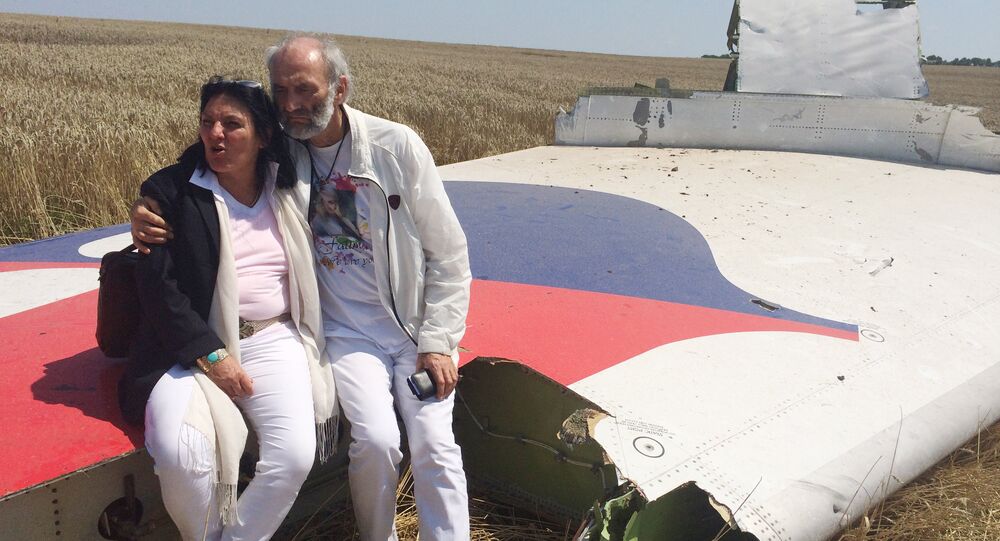 Russia holds an absolutely right position on the MH17 plane crash and is able to bring truth to the international community, including, first and foremost, the relatives of the plane crash victims, political analyst Alexander Kazakov told Sputnik.

According to him, Russia can offer factual data which can assist the investigation, benefiting the international community and especially the relatives of the plane crash victims.

The interview came after the Dutch-led Joint Investigative Team (JIT) made public a report on the details of the July 2014 crash, according to which the plane was shot down near the settlement of Pervomayskoe, controlled by Donbass militias.

© AFP 2021 / EMMANUEL DUNAND
The wrecked cockipt of the Malaysia Airlines flight MH17 is presented to the press during a presentation of the final report on the cause of the its crash at the Gilze Rijen airbase October 13, 2015

The report  alleged that that the plane was downed by a 9М38 missile launched from a Buk system, which was brought from Russia and later returned there.

"The only allies that we have now in this so-called investigation by the JIT are the relatives of the victims. And I think we need to bring the right information to these people, namely, our side of the story based on common sense and the base of evidence, not special effects or animation movies. And I think we can do it already now', Kazakov said.

He lamented the fact that the JIT's investigation resembles an information war rather than a probe.

"JIT investigators actually use information war tactics by trying to be the first to point the finger of guilt and quickly broadcast these accusations through all media outlets," he said.

Kazakov praised Russia for conducting its own probe into the MH17 plane crash, describing the JIT's investigation as a politically motivated inquiry.

"There is an internal logic of the investigation, but there is also a public component which is politically motivated from A to Z. They have an order and they are trying to stick to it," he said, referring to the JIT's probe and JIT investigators' unwillingness to heed the results of Russia's investigation into the matter.

In contrast with JIT allegations, Russia insists that the Buk missile was launched from an entirely different point, namely from the area near the village of Zaroshchenskoye, which was controlled by the Ukrainian armed forces at the time.

Russian Defense Ministry spokesman Maj. Gen. Igor Konashenkov has expressed doubt about the impartiality of the data provided by the investigators of the MH17 crash and the conclusions made on the basis of this data.

Earlier, the Russian Defense Ministry said that no Russian missile systems, including Buk, had ever crossed the Russian-Ukrainian border.

© Sputnik
Blame and Bias: MH17 Plane Crash Investigation's Goal is 'to Discredit Russia'
Speaking to the television channel BBC World, Lavrov said that the technical details and testimonies on which the report was based came from the social media and unnamed witnesses. He expressed hope that the information provided by Russia would be taken into account in the investigation.

Lavrov was echoed by Kremlin spokesman Dmitry Peskov, who said that an investigation into the Malaysian Airlines MH17 crash is "doomed to fail" if all the versions of the disaster are not taken into account.

Meanwhile, Australia' Foreign Minister Julie Bishop has said that the identities of those responsible for the MH17 crash might be confirmed by the end of this year or the beginning of 2017.