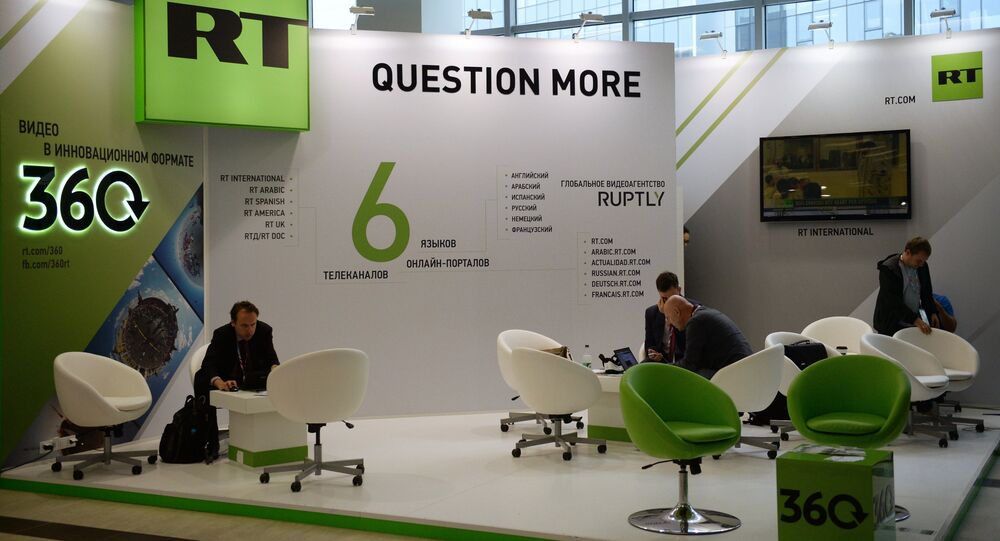 Russian Foreign Ministry spokeswoman Maria Zakharova said that RT is unlikely to be absolutely objective, but it is capable of providing a vision of events different to that of the British Broadcasting Corporation (BBC), the Cable News Network (CNN) or the Fox Broadcasting Company.

"The RT television network has become a direct competitor to its Western equivalents in many countries… What RT is doing is a breakthrough since an alternative source of alternative information has emerged in the world's media space," Zakharova told the TV Tsentr channel.

The information is unlikely to be absolutely objective, but RT is capable of providing a vision of events different to that of the British Broadcasting Corporation (BBC), the Cable News Network (CNN) or the Fox Broadcasting Company, she added.

© REUTERS / Carlos Barria
Clinton Says ‘Disappointed’ by Trump RT Appearance
RT operates a number of cable and satellite television channels in a number of languages and is directed at foreign audience. The channels provide 24-hour news coverage, as well as airing documentaries, talk shows and debates.

In late September, US Director of National Intelligence James Clapper reportedly said in a secret document, prepared at the request of US lawmakers, that RT and the Sputnik news agency target Europe's fringe political groups and give a "disproportionate coverage" of "extreme factions" of the European Parliament.

The document also contained the assumption of US intelligence that Moscow was disseminating its influence in Europe and Eurasia by deepening financial or political connections to like-minded political parties and non-governmental organizations.