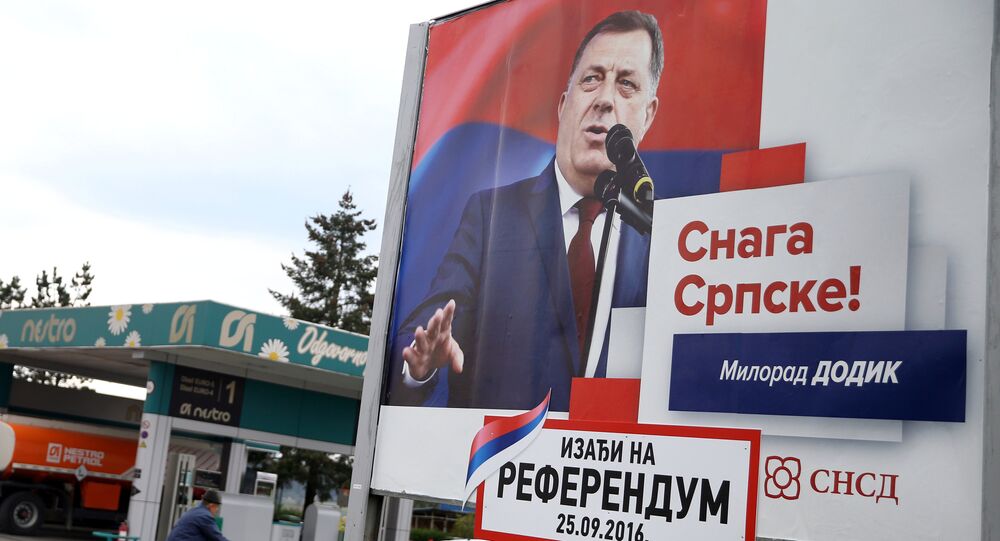 Washington is doing its best to turn Bosnia and Herzegovina into a Sharia state, Emil Vlajki, a professor from the University of Banja Luka and the former Vice President of Republika Srpska, told Sputnik.

© REUTERS / Inquam Photos/Octav Ganea
Pivot to the Balkans: This is Where US Could Build NATO's Next Aegis Ashore Base
In an interview with Sputnik, Emil Vlajki, a professor from the University of Banja Luka and the former Vice President of Republika Srpska, said that the United States is doing the best it can to instigate Sharia Law in Bosnia and Herzegovina.

The interview came after Washington harshly condemned last Sunday's referendum by Republika Srpska, one of two entities comprising Bosnia and Herzegovina as per the Dayton Peace Accords, to declare a national holiday in defiance of a ruling by the Bosnian Constitutional Court.

Commenting on this, Vlajki said that America and its Western allies suffered several [diplomatic] defeats at Russia's hands, such as in Syria, and now it wants to recoup itself in the Balkans, punishing Republika Srpska's President Milorad Dodik for the referendum.

This scenario in Bosnia and Herzegovina is simple and it can be considered in the context of the new Cold War, Vlajki said, citing the "simple" reasons he believed prompted the Bosnian Constitutional Court to stage a provocation against Republika Srpska.

"Notably, all this is absolutely not connected with whether the January 9 Republika Srpska Day is celebrated or not," he explained.

Vlajki recalled that it is the Republika Srpska, led by President Dodik, which prevents Bosnia and Herzegovina from joining NATO.

© AP Photo / Petros Giannakouris
Bosnia And Herzegovina to Become Part of Migrant Route to EU
"So it is safe to assume that the Bosnian Constitutional Court just implements tasks ordered from the outside, seeking to remove President Dodik from politics, which in turn paves the way for  Bosnia and Herzegovina joining NATO," he said.

This is why it's not surprising that the West does not react to the bellicose rhetoric of Bakir Izetbegovic, the Bosniak member of the tripartite Presidency of Bosnia and Herzegovina, who pledged that Dodik will share the fate of Muammar Gaddafi and Saddam Hussein, according to Vlajki.

He said that the apart from Washington's efforts to tell Sarajevo how to deal with Republika Srpska, the White House seems to be adding to the Islamization of the Balkans.

"Since 1992, they have helped Muslims and actually brought the Mujahideen to Bosnia and Herzegovina. They allowed the direct transfer of weapons and the Mujahideen through Croatia. I obtained the documents that prove that former Croatian President Franjo Tudjman was furious about all this, but he had no other choice because he was afraid of losing US support," Vlajki said.

He warned of the deterioration of the situation in Bosnia and Herzegovina, saying that "the US's ultimate goal is to create a unitary state in Bosnia which will be both a Muslim and a Sharia nation".

According to him, there are about 100,000 Wahhabis in Bosnia and Herzegovina who are so Islamized that they can serve as an excellent tool for provocations, such as potential shooting incidents.

"And I do not exclude that in case of a possible conflict, the Presidency in Sarajevo will ask NATO to intervene so as to stabilize the situation," he said.

Commenting on the European Parliament's statement that Moscow's support for the referendum shows that Russia allegedly wants to expand the confrontation, Vlaicu said that the desire to take possession of Russia's vast natural resources is still there.

In this vein, he referred to Aesop's fable the Wolf and the Lamb, in which the wolf muddies the waters but blames the lamb.

"Russia can do what they want, and they can do nothing, but all the same they will face accusations," he said.

"Our position is very clear. We believe the people of Republika Srpska have the right to decide themselves on vital issues," Ivancov said after his meeting with Republika Srpska President Milorad Dodik.

Ivantsov was echoed by the Russian Foreign Ministry's Spokeswoman Maria Zakharova, who said that Russia is against the "artificial politicization of this issue."

Russia to Carry Out Observation Flight Over Bosnia and Herzegovina