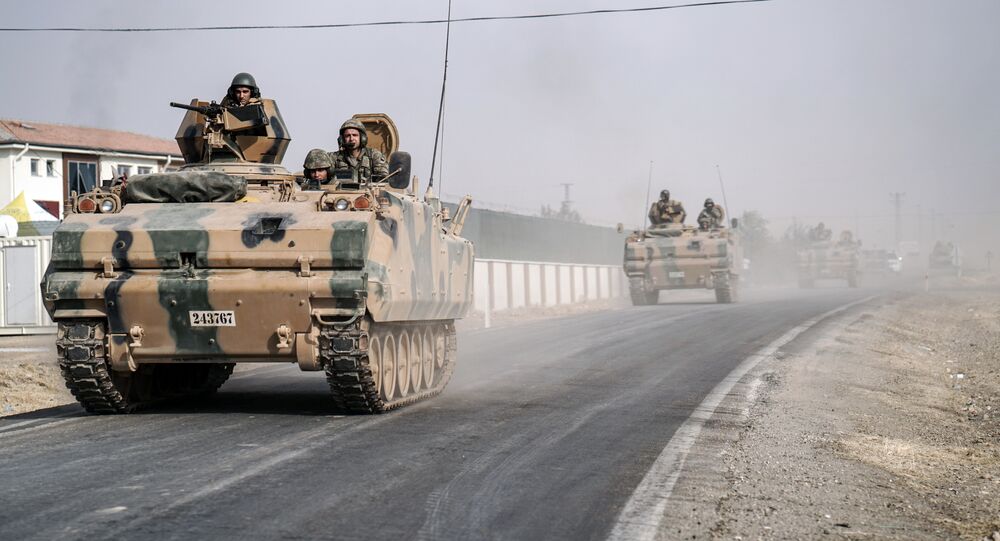 Before It Encounters Fierce Resistance, Turkey Should Withdraw From Syria

Until now, the Turkish Armed Forces and the Free Syrian Army (FSA) troops they support have been advancing through Syrian territory without any resistance; however, sooner or later, they will be routed at a very high price, so it's best to withdraw now, before the country becomes a direct participant in the conflict, says former Turkish diplomat.

© REUTERS / Eduardo Munoz
Turkey's 'Crossing of Russia's Red Line in Syria Might Inflame Hot War'
Turkish Armed Forces and the Free Syrian Army (FSA) they support within the Euphrates Shield operation have been advancing through the Syrian territory without any resistance.

However sooner or later, they will be routed and they will pay a very high price for it in terms of  human and material losses, Faruk Logoglu, Turkish former diplomat and former ambassador to the US told Sputnik Turkiye.

What is even more dangerous, he said, is that the current policy of the Turkish government towards the Syrian Kurds will inevitably push Turkey into a direct confrontation with the Kurdish units in the region.

This means that Ankara will become a direct participant in the Syrian military conflict, fighting at two frontlines simultaneously – against Daesh and the People's Protection Units, also known as the People's Defense Units (YPG), the main armed service of the Kurdish Federation of Northern Syria – Rojava.

Turkey does not need this. Its main task is to ensure security along its border with Syria, to eliminate any terrorist threat on its frontiers and contribute diplomatically to the settlement of the Syrian conflict.

The Turkish former diplomat explained that the farther Turkey's armed units go into Syria, the more problems they will encounter.

The first question they will be forced to answer after they supposedly liberate the city of al-Bab in the northeast of Aleppo and take under control the region: what will be next? How to keep the territory under control?

© AP Photo / Manu Brabo, File
Turkish PM Says Enemies Trying to Turn Turkey Into Syria Will Be Defeated
"I am not a serviceman but it is clear for me that this is a very serious problem that Ankara has not even been thinking about," Faruk Logoglu told Sputnik.

Taking all the above into account, the former ambassador concluded that his home country should wrap up its operation in Syria as soon as possible and withdraw from the Syrian territory before it encounters any serious losses.

"One of the most serious flaws of the Euphrates Shield operation is the lack of circumspect strategy on how to withdraw from the Syrian territory," Logoglu said.

Besides, he added, there is no clear final aim of the operation. At the beginning, it was the ensurance of security at the Turkısh-Syrian border, which has been partially achieved. The former diplomat especially stressed that it was "only partially", which has been demonstrated by the recent shelling of the Turkish city of Kilis near the border with Syria.

Faruk Logoglu also commented on the recent address of Turkish President Erdogan at the UN General Assembly in New York, calling it weak.

"If we call it an address of a Turkish leader to the international community, it was weak," he told Sputnik.

"It was mostly oriented at the internal situation rather than international problems. In particular, his remards about the coup attempt on July 15 and the relationship with the European Union were initially addressed to the Turkish audience," he said.

The former diplomat noted that the Turkish leader should have certainly mentioned the attempt of the overthrow in his address however he had paid excessive attention to it, taking into account that it did not directly affect 197 countries participating in the General Assembly.

Erdogan's idea of reforming the UN Security Council, he said, is also an important topic but it had not made much of an effect as it was repeatedly voiced by the Turkish leader before,

On the whole, his address was rather harsh and critical, Logoglu said, instead of being more conciliatory and encouraging, what is more appropriate nowadsys.