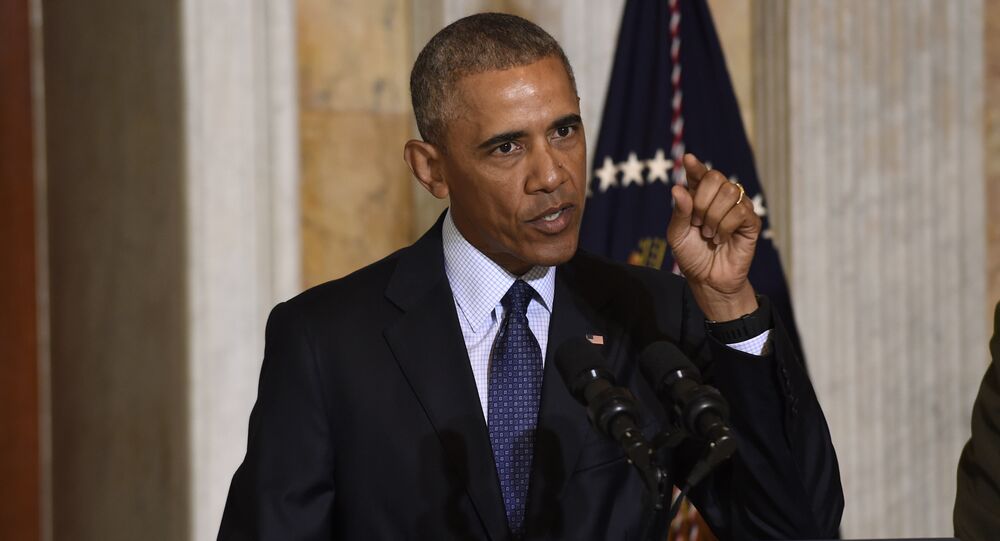 'Role Model'? Obama Points Finger at Trump Over His Stance on Putin

"He loves this guy," Obama said, in an apparent nod to the Russian President.

Dwelling on Trump expressing doubt about Russia's alleged influence on the upcoming US elections, Obama also urged voters to think about the current developments in the Republican Party, which Obama said should be "against Russia and authoritarianism," and stand for "freedom and democracy."

The Russian President's spokesman Dmitry Peskov, for his part, said that Obama's electoral rhetoric differs from what he says during negotiations and that such rhetoric damages efforts to build mutual trust.

"This rhetoric is formulated in the electoral style, but, of course, such statements are unlikely to contribute to the timid and very fragile attempts to bolster bilateral trust," Peskov said.

© REUTERS / Mike Segar
Clinton Must Retract Comments on ‘Deplorable’ US Voters to Qualify for Office - Trump
Commenting on Obama's statements, Gregory Copley, editor of Defense & Foreign Affairs, admitted that "in my 50 odd years covering the US government, I have never seen this level of partisanship within the administration where a sitting president actually regards the opposition party as the enemy of the state."

"This is simply ridiculous. By attacking Trump for his sympathy for Russia, Obama sacrifices the future of Russian-American relations for the sake of [Democrats'] victory in the elections, " Copley told RT.

"I think Obama is hoping that Russia's opponents will take his side and support Clinton's push for presidency. And he will say anything to help it," according to Wolff's interview with RT.

"A few days ago, Clinton suffered a series of setbacks after she made statements about Trump's supporters and her health. And I think they [those in the Clinton the headquarters] became a bit nervous, deciding to put pressure on Obama so that he can harden his rhetoric and help Clinton in the battle for the White House," he said.

Daniel Wagner, head of the company Country Risk Solutions, who is also an expert in international politics and economics, told RT that he "really does not understand why it is thought in America that if something is connected with Russia, it is automatically believed to be bad."

He said that the Americans are not in the know about modern-day realities, and that they do not know that different media platforms have the right to exist in the world.

"They do not know that RT is one of the world's largest media outlets, oriented towards a very wide audience. If I were Donald Trump I would have definitely appeared on RT. Even if I were Hillary Clinton, I would have done the same ", he said.

© AP Photo / Seth Perlman
Obama, Clinton Bear ‘Direct Responsibility’ of Destabilizing Middle East – Trump
During the election campaign, Donald Trump has already made a spate of key statements which were slammed by Democratic Party members. In particular, he said that if he's elected, he will be prepared to consider lifting the anti-Russian sanctions and recognize Crimea as an essential part of Russia.

Also, the billionaire promised the Americans that he would improve relations with Moscow, saying that Putin is a better leader for Russia than Barack Obama is for the United States.

At the same time, Trump made it plain that if elected, he would  work for the benefit of his country, regardless of personal relationships with leaders of other states.