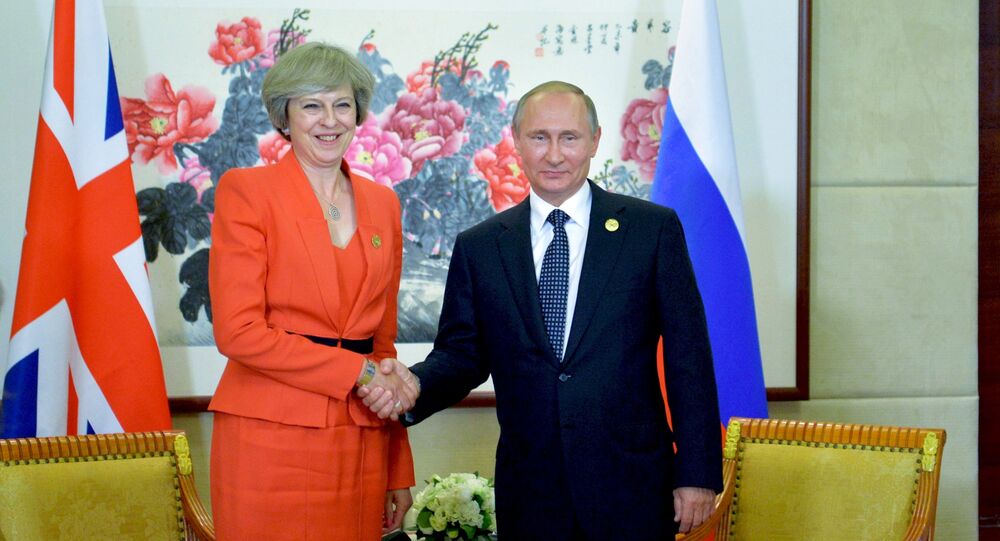 Executive Director of Russo-British Chamber of Commerce (RBCC) Trevor Barton said that dialogue between Russia and the United Kingdom at all levels is helpful for new phase in bilateral relations.

On Sunday, the Russian president and the UK prime minister held a bilateral meeting on the sidelines of G20 Summit in Chinese city of Hangzhou. During that meeting, Putin expressed hope that bilateral relations between Moscow and London would come to a higher level in both political and economic spheres, while May said she hoped that there would be an opportunity for London and Moscow to continue dialogue despite the divergent positions on certain complex areas of concern.

"In our view, dialogue at all levels is helpful in that process, so we hope that this high-level meeting represents the beginning of a phase of active engagement. Such inter-governmental engagement will encourage the RBCC’s members and other companies to look closely at the investment possibilities in each country and to spend time investigating the prospects for profitable trade," Barton said.

The RBCC head also noted the "importance of keeping trade and investment links open between the United Kingdom and Russia."

© REUTERS / Hannibal Hanschke
UK Prime Minister’s Office Confirms May’s Meeting With Putin at G20 Summit
May, formerly the UK home secretary, was widely expected to maintain a hard line on Russia after becoming the prime minister, as she was the minister responsible for the inquiry on the death of former Russian Federal Security Service employee Alexander Litvinenko, condemning the Russian government. She was also one of the main supporters of the EU anti-Russia sanctions.

The Russo-British Chamber of Commerce, which was founded in 1916, represents Russian, UK and international companies interested in strengthening their existing ties with Moscow and London or expanding into a new market. It has offices in London, Moscow and Saint Petersburg.