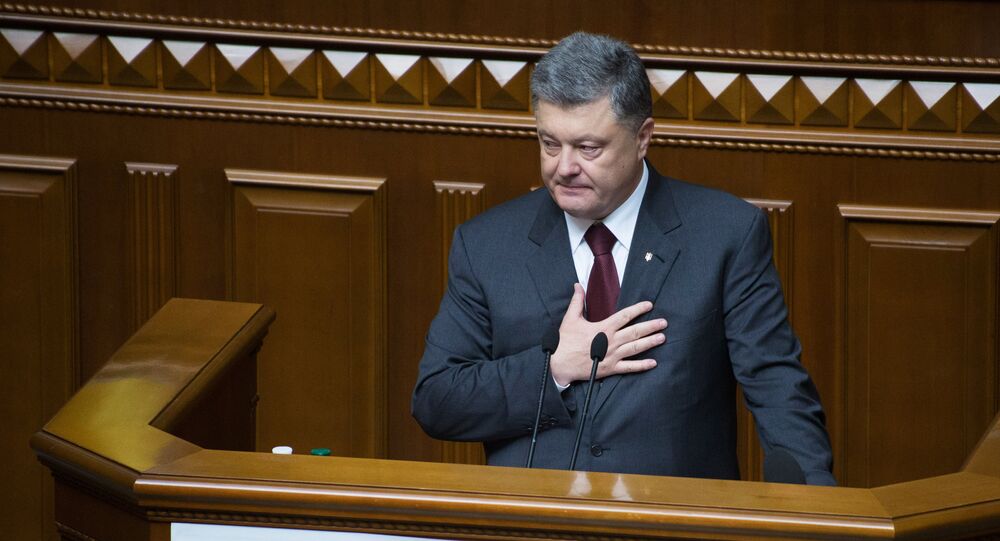 Ukrainian President Petro Poroshenko said that Kiev had lost 15 billion dollars from the loss of the Russian market, which he said was an "economic shock", according to RIA Novosti.

Speaking in an annual address to the Ukrainian parliament, Poroshenko said that his country's exports to Russia continue to decline.

"In 2015, our exports to Russia fell by half in comparison to 2014 and this is not yet the bottom. Russia's share in Ukrainian exports currently stands at only 9 percent, with a tendency to fall further," he said.

He added that due to the economic downturn, Ukraine has lost "tens if not hundreds of thousands of jobs."

According to him, "this economic aggression is one of the main reasons for the rapid decline in [Ukraine's] living standards."

Poroshenko added that Ukraine's military spending currently amounts to three percent of the country’s GDP and that the "military burden" on the budget and social sphere is "critically large."

Moscow imposed trade restrictions on Kiev, which supported anti-Russian sanctions, on January 1, 2016. The ban includes the supply of Ukrainian meat, sausages, fish and seafood, as well as vegetables, fruits and conserves.

In September 2014, the Ukrainian parliament approved an agreement with the European Union aimed at facilitating Ukrainian manufactures' access to the European market.

Even so, experts said in early 2016 that that Ukraine's exports to EU countries also declined, with losses estimated at tens of billions of dollars.

© Sputnik / Vitaliy Belousov
Here's What Will Happen if Moscow Breaks Off Diplomatic Relations With Kiev
In December 2015, Russian President Vladimir Putin signed a decree suspending the free trade agreement with Ukraine to protect the Russian market from the import of foreign products which could be supplied to Russia under the guise of Ukrainian-made goods.

The US and the EU slapped a spate of sanctions on Moscow after Crimea's vote to reunite with Russia in 2014 and allegations of Moscow's involvement in the crisis in the southeast of Ukraine.

Russia has repeatedly refuted the accusations, while warning that the sanctions (which prompted the counter-sanctions against Western food products) are counterproductive and undermine regional and global stability.

On July 1, the EU extended sanctions against Russia for another six months, until January 31, 2017.