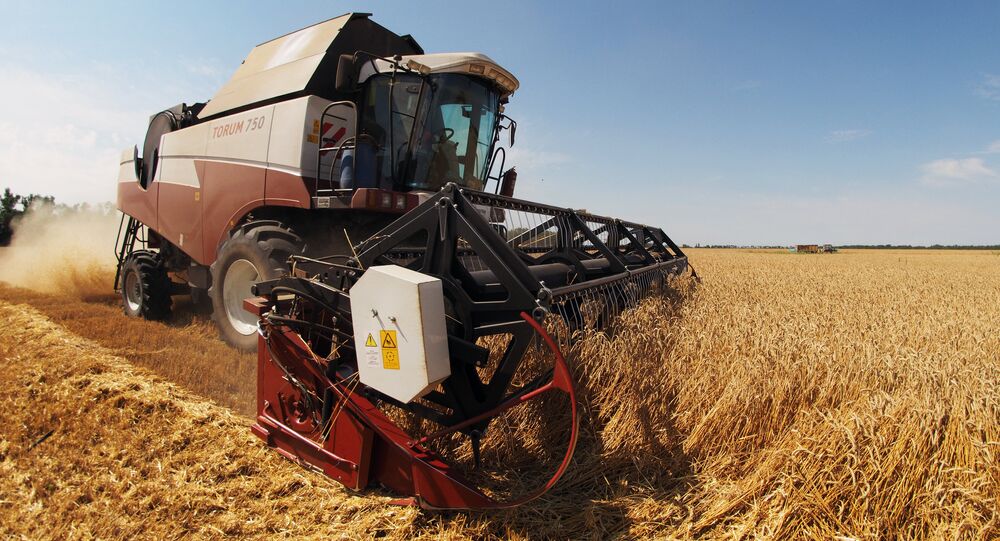 Moscow's ban on the import of food products from the EU and the ensuing ruble crisis have added significantly to the resurrection of Russian farming; now the country makes more money from the export of agricultural products than from the international sale of military equipment, according to Spiegel Online.

© Sputnik / Vladimir Trefilov
Stronger Ruble Reveals Huge Potential for Russian Economy's Recovery
Russia's decision to ban the import of produce, cheese and other products from the EU in retaliation for sanctions, as well as the subsequent ruble crisis, have stimulated the growth of Russian agriculture.

This is reflected in the export of agricultural products: for the first time in its history, the Russian Federation has started to earn more from food exports than from the arms trade, Spiegel Online correspondent Benjamin Bidder reported.

As an example, he referred to journalist-turned-farmer Dmitry Klimov, who now breeds chickens, geese and guinea fowl to produce coveted delicacies like foie gras and smoked sausage from poultry meat.

His farm, which is located about two hours to the north of Moscow, supplies these delicacies to elite restaurants in the capital as well as well-to-do private clients.

"Klimov belongs to a growing new wave of Russian farmers, who have repeatedly grabbed Russian headlines since President Vladimir Putin imposed a ban on the import of food products from Europe during the Ukrainian crisis," according to Bidder.

"It is Moscow's dream that Russia could emerge even stronger than it was before after the confrontation with the West," he said.

Elsewhere, enterprising Russians are trying their hand at everything from making cheese to brewing craft beer.

Bidder recalled that Russia's agricultural sector came to a standstill following the collapse of the Soviet Union in 1991, when about 35 million hectares of arable land was lost in the country, almost equal to the total size of Germany.

"This negative trend has stopped since 2014 which saw the growth of agriculture's share in the Russian economy's added value… Last year, Russia for the first time earned more on exports of agricultural products than on arms exports," Bidder said.

Of course, it is too early to speak of the full revival of Russian agriculture due to the isolation of the Russian market in the wake of the sanctions row, Bidder said.

At the same time, he added that ordinary Russian farmers have already started to benefit from the fact that European competition has disappeared from the Russian market.

© Flickr / Theophilos Papadopoulos
Silver Lining: Nexit May Spell End to Anti-Russian Sanctions
Russia was targeted by the US, EU and other states with sanctions following Crimea's vote to reunite with Russia in 2014 and allegations of Moscow's involvement in the crisis in the southeast of Ukraine. Russia has repeatedly refuted the accusations, while warning that the sanctions (which prompted the counter-sanctions against Western food products) are counterproductive and undermine regional and global stability.

Prime Minister Dmitry Medvedev said at the time that Russia would ban all beef, pork, fish, fruit, vegetables and dairy products from the European Union, the United States, Canada, Australia and Norway for one year; this ban has since been extended twice.

On July 1, the European Union extended sanctions against Russia for another six months, until January 31, 2017.

Croatia's Losses Due to Anti-Russia Sanctions Estimated at $334Mln - Ambassador

Are Enhanced Sanctions Against Russia Aimed at ‘Regime Change in Moscow’?

Kremlin Urges to Not Overestimate Negative Consequences of Anti-Russia Sanctions