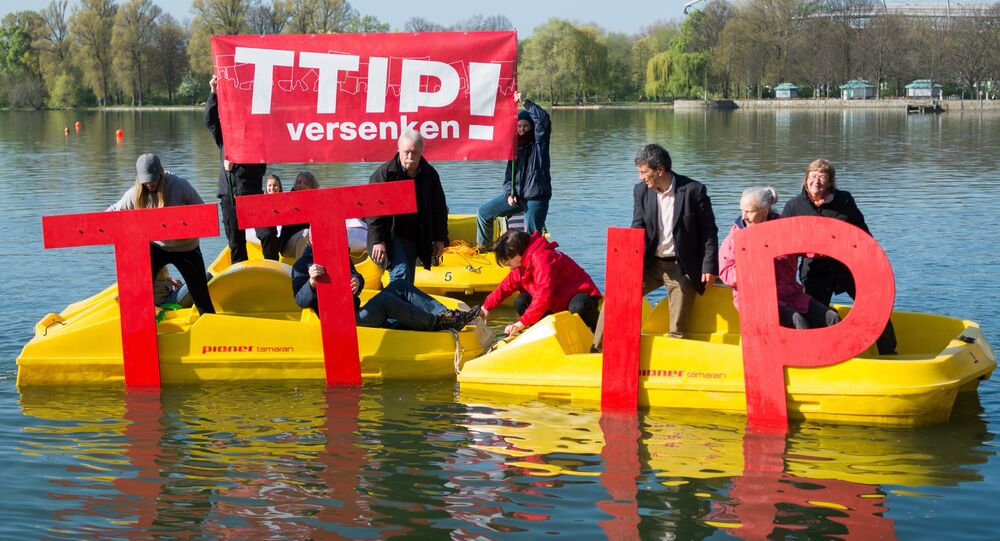 During the G20 Summit in Hangzhou early next month , US President Barack Obama will send a message to his partners in Asia that Washington is not abandoning the Trans-Pacific Partnership agreement, according to the White House spokeswoman.

© AP Photo / Geert Vanden Wijngaert
Don't Dream It's Over: 'Irritated' US Trade Chief Tells EU to Sign TTIP by End of This Year
The forthcoming G20 Summit in Hangzhou will see US President Barack Obama signaling his readiness to stick to both of the trade partnerships that the US has committed itself to, White House spokeswoman Christina Segal-Knowles said at a briefing in Washington, when asked whether the TPP project was dead.

She was echoed by US Trade Representative Michael Froman who earlier told Der Spiegel that his government is still confident that the Transatlantic Trade and Investment Partnership (TTIP) agreement between the US and Europe will be signed by the end of this year.

Meanwhile, French Trade Minister Matthias Fekl told radio station RMC on Tuesday that that "there is no more political support from France in the [TTIP] negotiations," and called on the European Commission to stop negotiations with the US.

Last Sunday, German Vice-Chancellor Sigmar Gabriel said that negotiations between the US and EU on the TTIP deal had come to a halt, putting an end to the plan.

Commenting on Christina Segal-Knowles' remarks, political analyst Andrei Volodin of the Russian Foreign Ministry' Diplomatic Academy, made it plain that he did not share her optimism.

"In its current form, this idea does not work and has no chance of success. As for China, the flop of this project shows that Beijing needs new forms of mutually advantageous relations with the countries of the Asia-Pacific region. And the example of the US is of importance to China because it may help Beijing find a way to develop these new relations," he said.

Some experts even suggested that when voting for the withdrawal from the EU, perennial US ally Britain could think that the TTIP agreement might undermine their national sovereignty and vital interests.

Mikhail Belyayev, an expert from the Institute of Stock Market and Management, told Sputnik that China, for its part, can use the opportunity related to Brexit.

He recalled that several decades ago, Japan considered the UK as its own channel and as sort of a Trojan horse to enter Western Europe's markets.

"Now that Brexit occurred, China can use political powerhouse Britain as a global Trojan horse in order to further strengthen its influence in the world and carry out a strategy of globalizing its own economy," Belyayev said.

In the meantime, media reports said on Tuesday that China and Canada had agreed on the speedy preparation of a feasibility study on the establishment of a free trade zone between China and Canada.

The TTIP deal has been criticized both for its secrecy and for the content of negotiations. Most of the information about the content of the talks has come from leaked documents and Freedom of Information requests.

The US government started its discussions over the free trade zone with the European Union in 2013. The details of the TTIP deal, including specific rules for market access have not been released to the public.