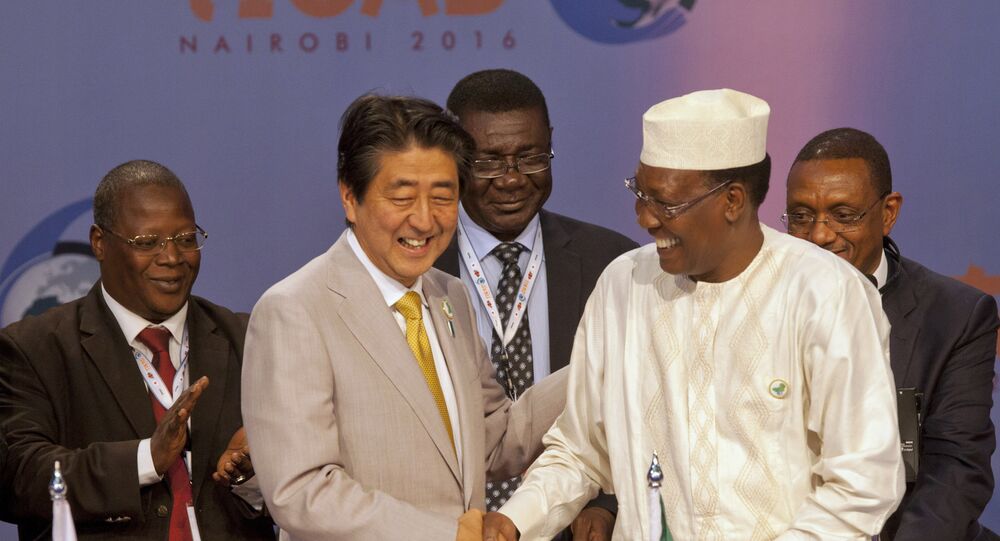 Despite China's ever-increasing clout in Africa, Japan will most likely manage to carve out its own niche in the African market, Alexey Maslov, an Asian policy expert from the Moscow-based Higher School of Economics, told Sputnik.

© Flickr / Japanexperterna.se
Bank of Japan Vows Negative Rates on Credits to Spur Economy
In an interview with Sputnik, Alexey Maslov, an expert on Asia from the Moscow-based Higher School of Economics, did not rule out that Japan will be able to carve out its own niche in the African market despite China's growing clout in the continent.

The interview came after the Tokyo International Conference on African Development (TICAD) wrapped up in Nairobi, in an event that saw Japanese Prime Minister Shinzo Abe pledging that his country will allocate a whopping 30 billion dollars for the development of African countries in the next three years.

It is worth noting in this regard that exactly one month before the opening of the two-day TICAD gathering on August 27, China conducted a Forum on China-Africa Cooperation (FOCAC), during which the sides signed 61 agreements worth 14.8 billion dollars in the form of direct investments.

China's General Administration of Customs said that over the past 15 years, Beijing has become Africa's main trading partner.

© Wikipedia / US Army
Japan’s Record-High Military Budget is Not Just About Deterring China
Maslov, for his part, told Sputnik that "Japan is seriously late in terms of its foray into African markets, which can be attributed not only to China's growing African clout but also African countries' unwillingness to cooperate with Japan."

However, he remained cautiously optimistic about Tokyo's breakthrough into the African market in the future.

"China is now dealing with major infrastructure, agricultural and financial projects [in Africa], as well as training personnel for African countries. But Japan can seize a spate of opportunities in other sectors, including technology and high-tech agriculture," Maslov said.

In the Nairobi Declaration adopted during the TICAD conference, the sides, in particular, reaffirmed their determination "to urgently reform UN bodies, including the Security Council, and to maintain political momentum through an enhanced dialogue to find the best approach."

Commenting on this, Maslov said that African nations are very unlikely to support Japan's push for UN reforms in the face of China's increasing influence in Africa.

"When the US tried to win the UN's trust, it actively worked with Latin America, trying to draw the majority of regional countries over to its side. Now Japan is repeating this scenario, trying to collaborate with Africa. But China, in my opinion, has already successfully performed in Africa, and most African countries will most likely support China," he said.

As far as Japan is concerned, it is bound to resuscitate its stagnant economy by making hefty investments abroad, a scenario that already saved the Japanese economy in the 1980s and even the 1990s, according to experts.

© REUTERS / Rolex Dela Pena/Pool
Why America Should be Worried About China’s New Military Base in Africa
Under the Nairobi Declaration, the sides pledged "to promote investment in quality infrastructure which leads to job creation and the transfer of expertise and know-how, as well as to the capacity building of the African countries and people."

Separately, the document underscored the importance of "promoting regional and international efforts related to maritime security, including piracy, illegal fishing and other maritime crimes, maintaining a rules-based maritime order in accordance with the principles of international law as reflected in the United Nations Convention on the Law of the Sea."

Africa's population is expected to more than double by 2050, accoridng to the Guardian newspaper.