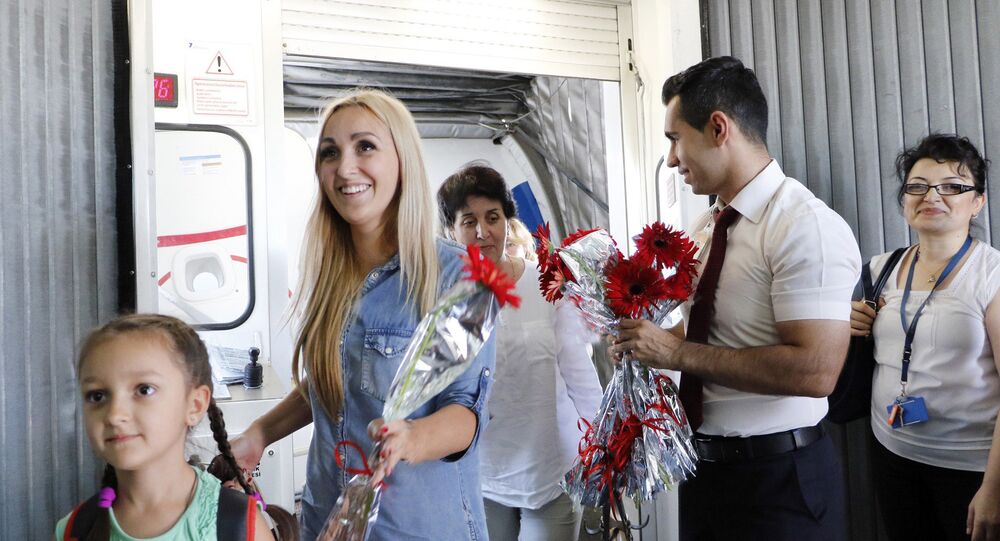 Moscow's move to lift the ban on charter air transportation between Russia and Turkey will hopefully boost the country's flagging tourism sector even though the summer vacation season is coming to a close, according to the Turkish newspaper Hurriyet.

© REUTERS / Murad Sezer
Turkey's 'Long-Suffering' Tourism Sector to Thrive After Ankara-Moscow Thaw
As summer draws to a close along with Turkey's peak vacation season, the inflow of Russians to the country may finally grow now that Moscow has permitted charter air travel to the country, the newspaper Hurriyet reported.

The newspaper recalled that according to the decree signed by Russian Prime Minister Dmitry Medvedev, the ban on charter flights between the two countries has been canceled from August 28.

Russia imposed an array of sanctions on Ankara when a Turkish fighter jet shot down a Russian Su-24 bomber in Syria. These included a ban on charter flights. Russian tourists, who prefer package tours which make use of charter air travel, stopped coming: the number of Russian visitors fell 93 percent in the peak month of June compared to a year ago, according to Bloomberg.

In July, Turkish President Recep Tayyip Erdogan apologized for the downed Russian warplane. The leaders of the countries met the following month and went about restoring bilateral ties.

As for Russia's move to lift the charter air transportation ban, it was immediately appreciated by Turkish tourism officials, who currently hope that they will manage "to recover about 15 percent of their losses in the Russian market after the flights begin," according to Hurriyet.

The newspaper quoted Cem Polatoglu, spokesperson of the Tour Operators Platform, as saying that the move mattered a lot and that "with a number of steps taken by the Turkish and Russian leaders, we have started to see the inflow in Russian arrivals, although the hot season is about to end."

"As the charter flights have not resumed yet, the arrivals are still in low figures. Around 200,000 Russian tourists are estimated to have visited Turkey through the scheduled flights, which have already resumed… This figure may reach 700,000 after the charter flights restart," Polatoglu said.

Passenger air travel to Turkey was briefly interrupted by the July coup.

Meanwhile, Russian tour operators have remained cautiously optimistic about the matter, saying that they do not expect high demand for Turkish resorts given the imminent end of the tourist season in the country.

Igor Blinov, service development director of the Russian tour operator Onlinetur.ru, told RT that with the peak summer vacation season coming to an end, the number of Russian tourists in Turkey is unlikely to grow.

"A special surge of interest in Turkey is unlikely because of the beginning of the new school year in Russia [on September 1] and the end of the active holiday season which typically covers June, July and August. In this regard, I think that we should already mull plans for the next year," he said.

Andrey Oganesyan, head of Sunrise Tour, was quoted by RT as saying that the resolution of all technical issues related to the resumption of charter flights may take about a month, which he said will mean that the tourist season would already be closed.

© Sputnik / Sergey Guneev
Damned If You Don't: Erdogan's Chance to Save Turkey's Tourism Industry
The Turkish Statistical Institute said last month that Turkey's revenues received from the sphere of tourism has decreased by 35.6 percent in the second quarter of 2016.

On June 30, Russian President Vladimir Putin signed a decree instructing the government to take steps aimed at lifting restrictions on tourist travel to Turkey as well as on charter flights between Russia and Turkey.