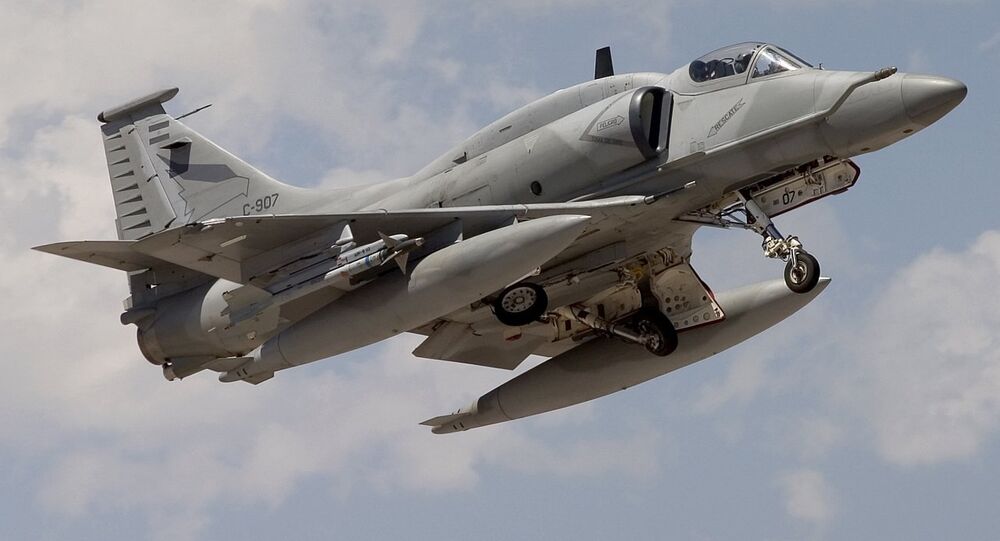 The US Department of Defense announced the beginning of negotiations to sell American military aircraft to Argentina, in what has already provoked an outcry in the media.

© RIA Novosti . Sergey Guneev
Kirchner: Argentina in Political Rollback as US Interest for Region Rising
Argentina is reportedly in the process of purchasing a batch of T6-C Texan II training aircraft from the United States, which can also be used in boosting border control and combating drugs.

The news prompted controversy, due to the fact that the Argentine aircraft manufacturer Fabrica Argentina de Aviones (FAdeA) plans to resume production of the T6-C Texan II-like domestic aircraft Pampa III. Meanwhile, the country's government has signaled its interest in the US, Italian and French analogues of the Argentine plane.

According to FAdeA head Ercole Felippa, his plant will be ready to start production of the 40 Pampa IIIs in 2017 after the enterprise repays its debt to foreign suppliers.

The goal is to replace 15 A4-AR Fightinghawk fighters that will be taken out of service in 2018, according to the Argentine newspaper La Voz.

Argentina's Ministry of Defense, meanwhile, is considering the purchase of M-346 Master aircraft from Italian manufacturer Aermacchi. The cost of the plane stands at 30 million US dollars, twice as much than that of the Pampa III.

As an alternative to the M-346 Master, Argentinean authorities are mulling buying 24 American-made T6-C Texan II planes, worth about 300 million dollars.

The third and last option is the possible purchase by Buenos Aires of the F-1 Mirage Squadron from France, in a deal that may cost approximately 280 million dollars.

In an interview with Sputnik, international defense expert Andrey Serbin warned against jumping to conclusions when it comes to Argentina's possible purchase of the T6-C Texan II planes.

According to him, "the media quickly alleged that Argentina plans to buy the Texan aircraft, but the real state of affairs is not that simple."

"Under the US procedures, if a foreign state is interested in the acquisition of military equipment, the relevant request should be first of all approved by Congress. The issue is just being negotiated, and Argentina only asked the Americans to give an estimated cost of the project," he said.

He added that with official statements on the matter yet to be made, many remain skeptical about Argentina's possible go-ahead regarding the deal.

"The US reacting to Argentina's request regarding the estimated cost documentation does not mean that the sale [of the Texan planes] will take place. It is even possible that Argentina is poised to start talks with a third country, and in this case, it can request such documentation from the US so as to put pressure on a potential supplier," Serbin said.

© AFP 2021 / FRANCK FIFE
Argentina Free to Repay Creditors as US Court Opens Doors to Bond Markets
He pointed out that all this can be hardly seen as the most important issue in the debates. According to him, Buenos Aires should be first and foremost be concerned about the lack of funds for aircraft maintenance.

"You can buy all the planes of the world, but if there is no money for fuel, repair of motors or pilot training, using these aircraft will make no sense," he concluded, referring to the complicated situation in Argentina, where he said the number of operational aircraft has yet to increase.

US, Argentina to Cooperate on Defeating Drug Trafficking - President Macri

US Approves $80Mln Sale of Bell Helicopters to Argentina