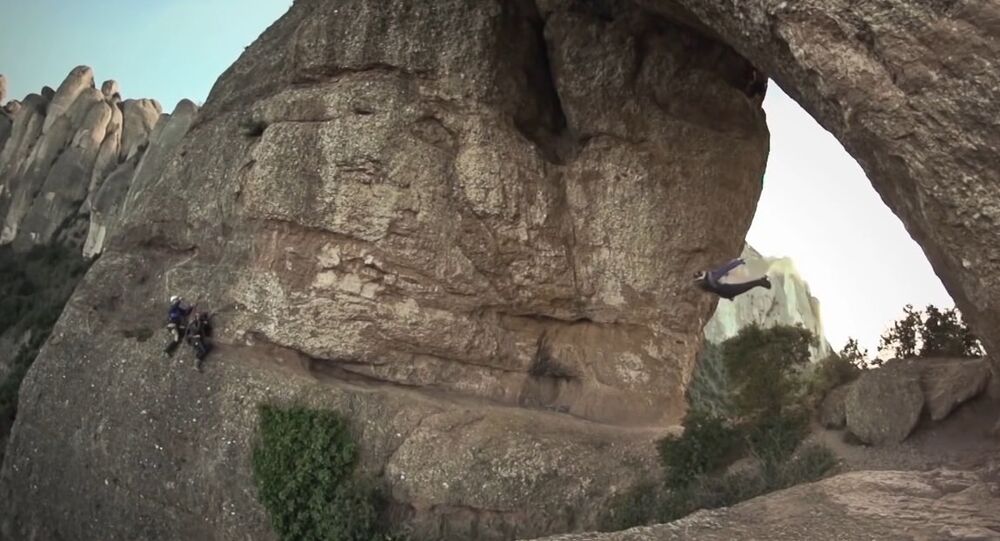 Life on the Edge: Top Death-Defying Acts of All Time (VIDEO)

In an attempt to get a dose of adrenaline, some people chose a life full of adventures, performing acts that spin people’s heads and leave their knees trembling.

No Parachute, Only a Net

Is it possible to jump from a height of 7.6 km and stay alive? American professional skydiver Luke Aikins proved it is.

As one of the most accomplished skydivers in the world, who has carried out more than 18,000 jumps, Aikins on Saturday became the first person to jump 7620 meters without a parachute. After two minutes of free fall above the California desert in the US, he landed in a safety net, stretched at a height of a 20-storey building.

This is probably the most insane extreme and spectacular stunt for several years ahead. But Aikins, of course, is only one of the many daredevils who have decided for themselves that their lives are too boring without the risk and fatal danger.

Supersonic Jumps From the Stratosphere

In 2012, Austrian skydiver and BASE jumper Felix Baumgartner made an outstanding jump from a height of approximately 39 kilometers, somewhere in the middle of the stratosphere above New Mexico in the US. He became the first skydiver to break the speed of sound when he jumped from a small capsule and landed safely on the ground nine minutes later.

However, this space diving record was broken two years later by one of the Google executives Alan Eustace, who jumped from a slightly larger height. Both jumps were accomplished with a parachute. Should we now expect to see a jump from the stratosphere without it?

A View From Above

Everyone likes to take beautiful panoramic pictures standing on the top floor of a skyscraper. But some people apparently go even further and climb  the outside of the highest buildings in the world.

British thrill-seeker James Kingston climbed the tallest residential building in the world — the 425-meter skyscraper Marina 101 in Dubai, the UAE. Alas, that was not enough for Kingston, so he climbed another 25 meters up on a crane, which towered above the roof of the building, which was under construction.

"Put it this way… you'd be dead if you fell off the top of the crane and landed on top of the building," he explained in the description of the video on YouTube.

A couple of years ago, two Russian daredevils climbed even higher, up on the Shanghai Tower in China, which was still under construction. Now it is the third highest building in the world (632 meters) after the Tokyo Skytree television tower (634 meters) and the Burj Khalifa skyscraper in Dubai (828 meters).

They also climbed on a crane — and that was perhaps the most terrifying part of their extreme act. "Mom will be shocked!" exclaimed one of the guys. "I hope she does not see this video," says the other.

Alain Robert, who was called a French Spiderman, climbed the walls of more than 70 skyscrapers around the world using only his bare hands. He easily reached the top of the 150 meter high National Telecommunications building in Abu Dhabi, UAE in 20 minutes.

Wingsuit Flying, Skydiving and BASE Jumping

Another professional skydiver Alexander Polli did what had never been before done — a flight through a small cave on a rugged mountainside. The narrow cave nicknamed the "Batman Cave" is located in Montserrat, Spain and was no wider than Alexander is tall. Gliding through the air in a wingsuit, Alexander reached speeds of 250 km/h and flew directly through the cave opening, following a precise trajectory. Don't try to imagine what the results would be if he drifted slightly to the side.

A stunt, completed by in 2011 by an American professional skydiver and BASE jumper, is no less impressive. At an estimated speed of 136 km/h, Jeb Corliss flew through a waterfall. To complete this trick, he spent more than year training and made several attempts. Once he miraculously escaped crashing into the rocks.

The word "BASE Jumping" comes from the acronym B.A.S.E. — building, antenna, span and earth. So, if you have to jump from a building, then why not to use the world's tallest one?

The height of Burj Khalifa is 828 meters. In 2014, two BASE jumpers Fred Fugen and Vince Reffet jumped from its top and broke a new world record. No one has broken it yet — as a higher fixed point does not yet exist.

This video was filmed by an unknown skydiver who jumped in the Great Blue Hole and while it might not seem as extreme as the previous ones, it is definitely one of the most beautiful videos in this list.

American Nick Wallenda is a seventh generation daredevil, tightrope walker and stuntman. His great-grandfather Karl Wallenda died in 1978 while trying to walk a tightrope between two houses in Puerto Rico.

As for Nick himself, his acrobatic tricks have entered the Guinness World Records six times. In 2012, he walked on a wire across the Niagara Falls, though with a safety harness, as he wasn't allowed to traverse  without it.

And in this video, filmed in Chicago and shown live on Discovery channel, Wallenda walks a tightrope without protective equipment.

Extreme sports are called extreme because they can end in disaster. But some still manage to survive in situations when all seems lost.

For example, BASE jumper Matthew Gough had an extraordinary escape in Lake Garda, Italy, when his parachute opened backwards. After grazing the cliffs at incredible speeds and falling hundreds meters to the ground, he was found at the foot of the cliff stunned but mostly unharmed except for minor injuries to his knees and ankle.

And this is a typical parachute jump with an instructor — seem like everything should be under control. Fortunately, they managed to escape collision by centimeters. "How we got so lucky?! Not sure," the instructor wrote under the video.