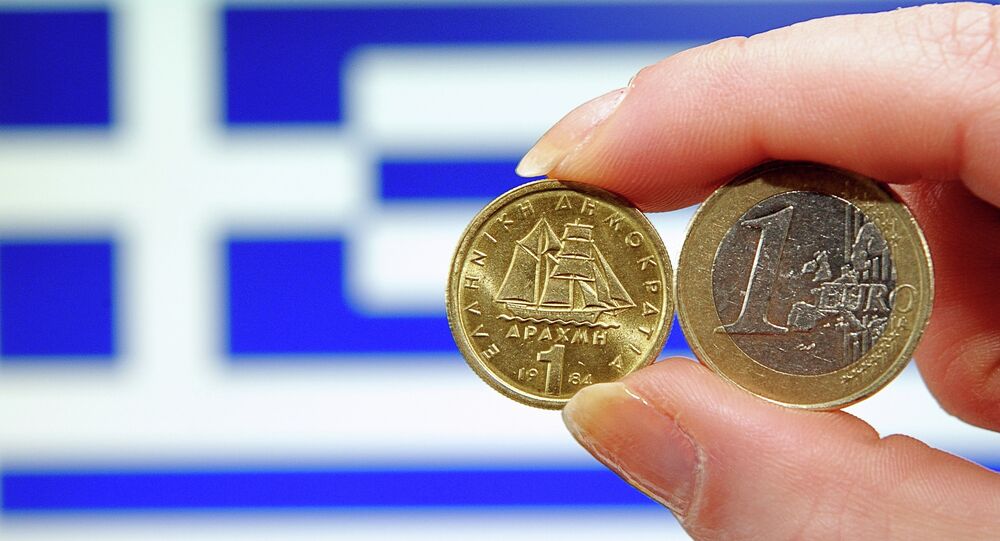 A report published by non-European IMF experts criticizes the organization's reaction to the first Greek debt crisis, in which it was heavily influenced by Brussels, German newspaper Suddeutsche Zeitung reported.

The confidential report substantiates criticism directed at the IMF by its non-European members, who charge the Washington-based organization with favoritism towards European countries.

Prior to the onset of the Greek debt crisis in 2010, the IMF's lending rules stipulated that it would only disburse loans to countries which were able to repay their debts, and its resources were mainly used by smaller, developing economies.

© Flickr / Truus, Bob & Jan too!
Greek Debt Relief Driving 'Deep Rift' Between France & Germany
However, fears in the EU that a default on Greek debt could spread panic throughout the Eurozone, led European leaders like German Chancellor Angela Merkel to demand IMF involvement in the Greek bailout.

Under the leadership of then-Managing Director Dominique Strauss-Kahn, the IMF thus rewrote its rules to allow lending to countries judged to be of "systemic" importance, like Greece.

Along with the European Central Bank and the European Commission, the IMF became part of the Troika group of creditors, and took part in Greece's first €110 billion ($122 billion) bailout.

According to the latest report seen by German newspaper Suddeutsche Zeitung, the IMF enabled its role in the bailout under political pressure from Brussels, and created overly optimistic forecasts to justify its lending to Greece.

In the negotiations between the Greek government and the Troika, the IMF "lost its characteristic facility as a crisis manager," the report says.

As the EU Commission acted on behalf of European countries in the debt negotiations, IMF representatives "were subjected, from the beginning, to political pressure in their technical analyses."

The 80-page report, most of whose authors are non-European, also point out that the IMF provided the financing to Greece despite initially referring to Greece's ability to repay the extra debts as "unlikely."

In addition, it failed to produce any guidelines about the loan conditions for countries in a monetary union, like Greece, which have no prospect of devaluing the national currency to increase exports or tourism.

The issue of over-optimistic economic forecasts is not confined to Greece; the report's authors say the IMF gave unrealistic forecasts for other Eurozone economies like Portugal, again allowing lending to occur in spite of concerns about the nation's ability to sustain the debt.

The experts call the IMF's activities "inconsistent," and contrary to its claim that it is an "independent, technocratic" institution.

In June last year, Greece became the first Western country to default on its IMF loan after missing two deadlines to pay the fund €1.6bn ($1.8bn) in debt interest on loans it had already received.

The conditions of the European deal included more austerity measures for Greece, including demands for Athens to immediately reform its value added tax system, increase revenue by broadening the tax base, reform its pension system and privatize national assets.

In July of last year Greece used the EU bailout funds to pay its arrears to the IMF, which, in contrast to the EU, has since relaxed its view on Greek debt. The IMF refuses to participate in more lending for Greece unless European leaders commit to a formal restructuring of Greece's debt.

The saddling of more debt and austerity measures on the country have yet to revive the Greek economy; in 2015 its annual GDP declined 0.2 percent, and is predicted to decline again this year, by 0.3 percent.