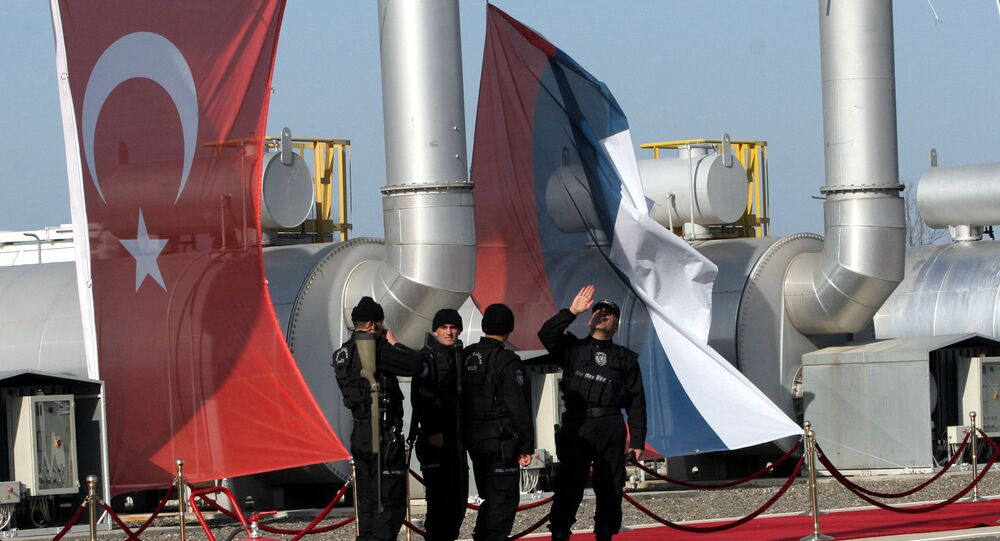 Ahead of the upcoming meeting between Russian and Turkish energy ministers later this month and expected revival of joint energy projects, including the Turkish Stream, well-known Turkish political analyst Togrul İsmayıl tells Sputnik that NATO and EU might express deep concerns over the renewal of energy cooperation between the two countries.

“Energy issues, including major joint projects will be among the key topics for discussion,” Likhachev told journalists on the sidelines of  G20 Trade Ministers meeting in China when asked about possible revival of the Turkish Stream project.

Well-known Turkish political analyst and Professor of TOBB University of Economics and. Technology Togrul İsmayıl told Sputnik that the crisis in Russian-Turkish economic relationship is not as deep as it might seem, however the revival of political and legal cooperation between the two countires might take certain time.

The political analyst also noted that there are certain external factors which might have an impact on the settlement of the economic cooperation between Russia and Turkey. And stressed that NATO, which is currently toughening it policy against Russia, might express certain discontent over the renewal of energy cooperation between the two countries.

© AP Photo / Murad Sezer
Ankara, Moscow 'Might Revive Turkish Stream Project' Following Recent Thaw
“It is well-known that Turkey has not supported the sanctions imposed by the EU and the US on Russia,”  İsmayıl tokld Sputnik.

“Hence, the EU might try to exert certain pressure on Turkey with regards to further implementation of Russian-Turksih energy projects. However I doubt that this pressure will have any sensitive effect,” he added.

“The major resistance might come from NATO,” the political analyst further said. “And Turkey might experience certain difficulties. However even during the Cold War Russia was trading freely with Europe in the energy sphere. Thus I don’t think that such difficulties migh cause a negative impact on Russian-Turkish economic relationship or otherwise “get Turkey cornered.”

The political analyst also noted that the major task is now to lift the sanctions imposed on each other  during the recent crisis and to gradually increase the trade turnover between the two to $100 billion, the target the two countires announced before the downing of the Russian jet in November last year.

© Sputnik / Alexey Kudenko
Turkey and Russia Halt Negotiations Over Turkish Stream - Russian Energy Minister
İsmayıl also stressed that Russia remains one of the largest energy suppliers for Turkey and Turkey is an important energy consumer of the Russian gas.

With regards to the Turkish Stream project the political analyst said that Russia is regarding it as a geopolitical issue while Turkey is focused more on its economic aspect, which will guarantee its energy security.

He also noted that both countries have not abandoned any of the earlier discussed projects and the works on them are still going on, including the ones on the construction of the Akkuyu nuclear power plant.

Russia-Turkey Charter Flights to Resume in Near Future

Why Russia-Turkey Normalization is More Than Meets the Eye