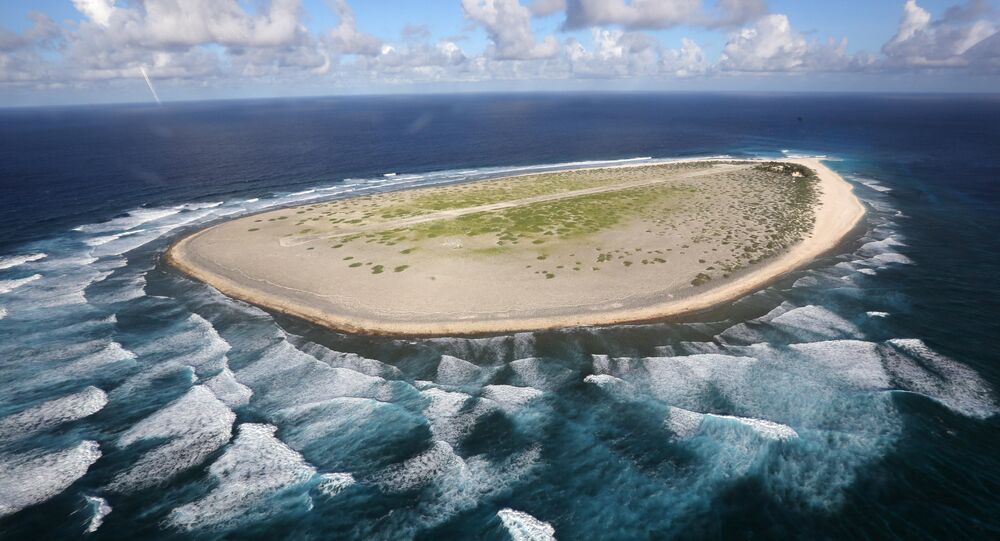 The situation in the South China Sea region on the eve of the decision by the Hague Arbitration Law of the Sea has escalated dramatically and an attempt by the Philippines to act on the basis of international law seems counterproductive.

Victor Sumskiy director of the ASEAN department at MGIMO University spoke to Sputnik commenting on the upcoming verdict which will be made on July 12 and whether it will help resolve the South China Sea dispute or further escalate the situation.

“The hype around this topic began at the time when Philippines filed a lawsuit. With the help of international legal mechanisms it was planned to clarify the dispute, which is going on around the South China Sea islands for some time now,” Sumskiy said.

China has conducted unprecedented naval maneuvers in the South China Sea, at the same time, warning the US that if they behave provocatively, they would seriously regret it. There is no consensus on this dispute among ASEAN countries.

The very beginning of the arbitration procedure requires the consent of both the parties, which in this case did not happen. China immediately announced that it would not accept the verdict.

“It seems that we are dealing with a case when an attempt to act on the basis of international law is counterproductive and the forthcoming verdict of The Hague Tribunal will only aggravate the situation in the region,” Sumskiy said.

Let’s take a look at other islands in the world that are subjects of international disputes today.

The Liancourt Rocks, known as Dokdo (‘Solitary Island') in Korean and Takeshima ('bamboo island') in Japanese, consist of two main islets and 35 smaller rocks in the Sea of Japan (East Sea).

Until 1945 it was under the administrative control of Korea which was part of the Japanese empire. In 1952, South Korea announced Takeshima as its territory and put up its flag.

In response to this, Japanese sailors arrived on the island, arrested six Koreans and hoisted the flag of Japan. A few hours later superior Korean forces took back the islands. Takeshima gives the right to control of over 20 thousand sq. km of the surrounding ocean which is rich in fish.

Interestingly, North Korea supports South Korea's claim, despite still technically being at war with them.

Consists of eight islands with a total area of 7 square km. The islands are uninhabited (one is used by the US military for drills) but are surrounded by rich fishing grounds and are rich in oil reserves.

These islands are a subject of dispute between Japan, China and Taiwan, but are de facto controlled by Japan.

In 2010 a Chinese fishing boat and a Japanese coast guard vessel collided near the islands, setting off a serious diplomatic row in which Beijing temporarily froze trade and ministerial talks.

Jointly owned by France and the UK and administratively belongs to the archipelago of the New Hebrides.

In 1975, France officially announced the island territory as its own. In 1980, the New Hebrides gained independence, becoming the Republic of Vanuatu and laid claim to the islands.

The Falkland Islands comprise East Falkland, West Falkland, and 776 lesser islands. The controversy between Argentina and Great Britain on the Falklands began in the XIX century, when the first British settlers arrived on the islands.

In 1980 there were about 1.8 thousand permanent settlers on the island. In 1982, the Argentinians seized the Falklands but the British expeditionary force drove them out.

During the dispute roughly 250 British and 750 Argentine soldiers were killed. The region has large reserves of oil.

Last month, British Defense Secretary Michael Fallon said that England plans to “beef up” its defense of the islands. Argentina has also stepped up a campaign to get what it calls 'Las Malvinas' back.

Canada and Denmark are currently in dispute over who owns a small island in the Kennedy Channel, which separates Canada's Ellsmere Island from Greenland.

The dispute dates back to the 1980s when the Canadians and the Danes waged the “Battle of the Bottles,” during which the Canadian and Danish navies would visit the island and leave bottles of Canadian Club whisky and Akvavit, Scandinavian liquor, to mark their territory.

Denmark and Canada are still trying to reach a mutual agreement regarding Hans Island.

The subject of a dispute between Equatorial Guinea and Gabon. The area is rich in fish and oil fields.

A Colombian coral island in the Caribbean Sea. Historically tied to England and politically part of Colombia, group of islands form resorts and coral reefs.
In 1928, Nicaragua and Colombia signed an agreement that recognizes Colombia's sovereignty over the islands.

In 1979, Nicaragua announced the denunciation of the agreement. The ownership of the islands affects the maritime boundaries not only of Nicaragua and Colombia, but also of Costa Rica, Honduras, Jamaica and Panama.

Part of barrier reef and which Belize declared its sovereignty over, prompting protests in Honduras and Guatemala.

A small, uninhabited rocky islet located off the coast of Morocco, just 200 meters from the mainland coast. Its sovereignty is disputed between Spain and Morocco.

It was the subject of an armed incident between the two countries in 2002. In 2003, the Moroccans captured Perejil and left a garrison of six people. Spain landed its troops and returned the island.

Morocco called Spain’s actions as a declaration of war, but failed to take any reciprocal steps.

A pair of two small uninhabited islets in the Aegean Sea, situated between the Greek island chain of the Dodecanese and the southwestern mainland coast of Turkey.

No one laid claim on the Imia rocks until the Dodecanese archipelago was occupied by Italy in the beginning of the 20th century. In 1923, the islands were given to Greece. Later on Turkey proclaimed that Italy had no right to do that.

Imia/Kardak was the object of a military crisis and subsequent dispute over sovereignty between Greece and Turkey in 1996.

The dispute is actually a part of the larger Aegean dispute, which also comprises disputes over the continental shelf, the territorial waters, the air space, the Flight Information Regions (FIR) and the demilitarization of the Aegean islands.

Island of Vukovar and Island of Šarengrad

Both the islands are claimed by Croatia and Serbia. They are located on the Danube River on the border between the two countries.

When Yugoslavia existed, both islands were part of Croatia. But during the Croatian War of Independence (1991-95), the Serbian militia occupied the islands. In 2004,

Serbia withdrew its troops from the islands but replaced them with police. Croatians can go to the islands, but Croatian land ownership is not recognized by Serbia.

The scattered islands are situated in the Indian Ocean. They are controlled by France but are claimed by Madagascar.

The islands have been classified as nature reserves. Except for Bassas da India, they all support meteorological stations; those on the Glorioso Islands, Juan de Nova, and Europa Island are automated.

The archipelago consists of 65 islands, the largest being Diego Garcia (40 sq. Km), which has a large US Air Force and Navy base.

Sovereignty over the Chagos Archipelago is disputed between Mauritius and the United Kingdom. After granting independence to Mauritius in 1965, Britain took away Chagos and then resettled about 2, 000 native residents of the archipelago to Mauritius.

The people have been demanding to return back to their land.

South Talpatti (as it was known in Bangladesh), or New Moore (India), was a small uninhabited offshore sandbar landform in the Bay of Bengal, off the coast of the Ganges-Brahmaputra delta region.

It emerged in the Bay of Bengal in the aftermath of the Bhola cyclone in 1970 and disappeared at some point later on.

The island was claimed by both Bangladesh and India, although neither country established any permanent settlement there because of the island's geological instability based on silt deposits in a delta which floods every year.

India had reportedly hoisted the Indian flag on the island in 1981 and established a temporary base of Border Security Forces (BSF), regularly visiting with naval gunships.

It was a part of Persia, now Iran. Back in the 19th century, the British set up a naval base there. The Iranians seized it back in 1971, two days before the proclamation of independence of the United Arab Emirates, which gave the British rights to the island.

Immediately following British withdrawal from these islands, Iranian marines laid siege to and gained territorial control of the islands for the first time since 1921, when the islands were first captured by Britain from Iran.