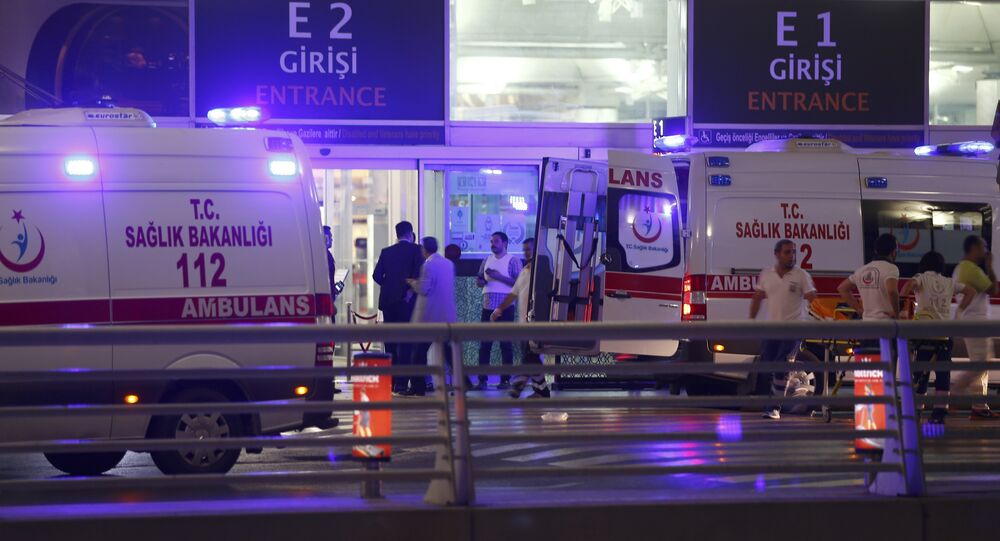 Dozens have been injured at Istanbul Airport, according to Sputnik sources in Turkish security services.

At least 36 people have been confirmed dead. Turkey's Prime Minister Binali Yildirim has also confirmed that three attackers were involved in incident, with all three opening fire before blowing themselves up.

Taxis are reportedly carrying injured people away from the airport. Turkish broadcaster Haberturk reports that at least 147 people are injured.

Local media reports that the blasts occurred outside as the attackers attempted to enter the terminal. The attackers reportedly detonated the explosive after being fired on by police. Officials say the attackers had not yet gone through the x-ray security checkpoint.

The attackers reportedly used a Kalashnikov.

Outbound flights have been grounded and some incoming flights were diverted. With some aircraft left circling above the airport, officials say planes in the air have been given permission to land. All additional flights have been cancelled until 8:00 am local time.

All flights between the US and Istanbul have been suspended for the time being.

A Moscow flight en route to Istanbul is returning to Russia.

The Turkish prime minister called for the creation of a crisis center.

Police blocked entrances and exits to the airport and moved to secure the location.

Local media reports that two individuals threw hand grenades into the airport, though this is unconfirmed at this time.

Turkey has seen a number of terrorist attacks in recent months. Two attacks in Istanbul earlier this year were claimed by Daesh, also known a IS/Islamic State, while a pair of car bombings in the capital of Ankara were claimed by a Kurdish militant group.